Apple (AAPL) has built up a pretty strong reputation over the years for developing processors that deliver superb -- if not unmatched -- performance relative to the amount of power they draw. Odds are pretty good that what they announced on Tuesday won't do anything to ding that reputation.

As many readers probably know by now, Apple unveiled the M1, a home-grown, Arm-architecture system-on-chip (SoC) for Macs.

The M1 features 8 CPU cores -- 4 high-performance cores and 4 low-power cores -- and up to 8 GPU cores, along with a 16-core AI co-processor, an image processor, media encoding/decoding engines and memory, storage and USB controllers. Like Apple's A14 Bionic SoC, which it shares quite a few things in common with, the M1 is made using Taiwan Semiconductor's (TSM) state-of-the-art 5-nanometer (5nm) manufacturing process node. 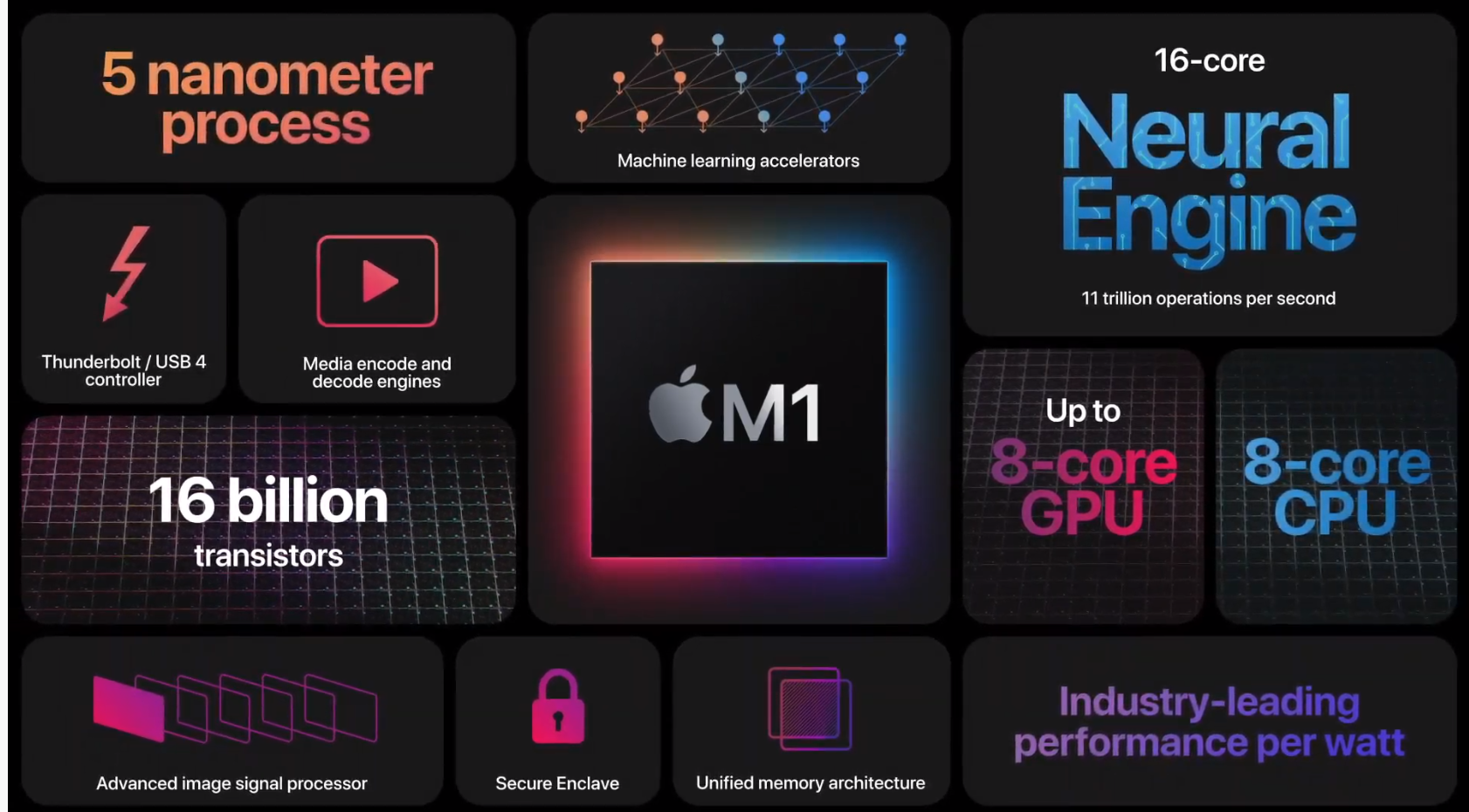 Here are some initial thoughts on what Apple announced.

We'll have to wait for third-party reviews and benchmarks -- they should be arriving in a week or so -- to see just how closely the performance and battery life of M1-powered Macs matches Apple's claims. But if the numbers are even within the same ballpark of those claims, then Apple pretty clearly delivered a meaningful hardware upgrade for three of its cheaper Macs. 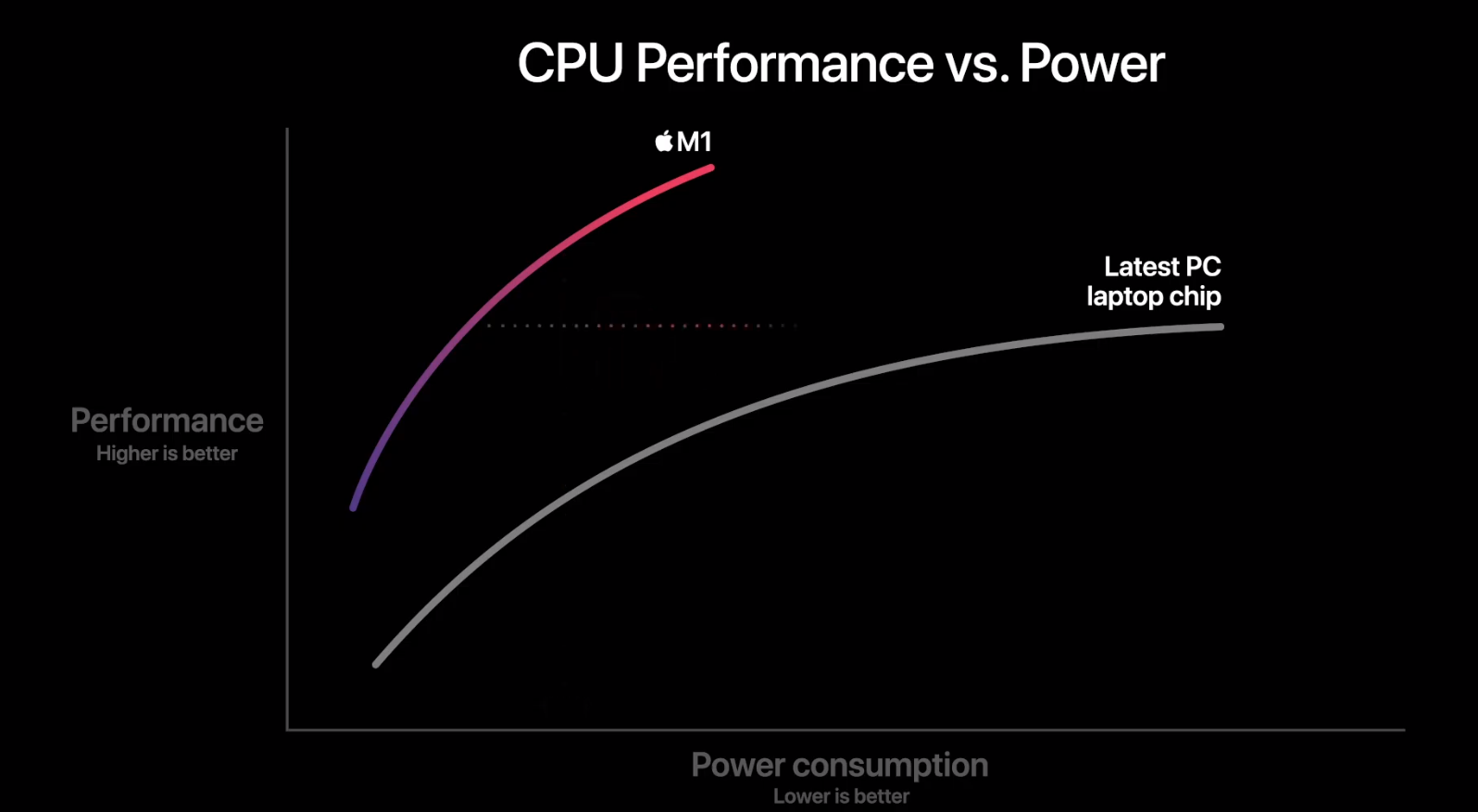 Apple asserts the M1 is unmatched among laptop processors in terms of performance per watt. Source: Apple.

Strictly in terms of hardware specs, those are pretty big improvements for devices that cost the same as their predecessors (or in the case of the Mac Mini, $100 less).

2. Apple's Margins on its New Macs Will Likely Be Pretty Good

It's impossible to know just how much lower Apple's bill of materials (BOM) is for each of its new Macs relative to their Intel-powered predecessors. But the savings are likely substantial, given how much cheaper it undoubtedly is for Apple to use internally-designed SoCs manufactured by TSMC than it is to source CPUs and motherboard chipsets from Intel.

One does need to account for the R&D expenses involved in designing the M1. But with the SoC leaning heavily on the R&D work Apple did for the A14, which powers the iPhone 12 line and the latest iPad Air, those expenses might not be massive.

Apple's Mac sales, it should be noted, are (following a recent sales jump) believed to be on a 20 million-plus unit annual run rate. If the company gets total savings of, say, $30 to $50 per unit as it fully transitions its Mac lineup to its own SoCs over the next two years, that yields a decent boost to its bottom line.

3. Apple's Control Over Both Hardware and Software Makes This Much Easier to Pull Off

Apple has not only rewritten macOS to be optimized to run on its own SoCs, but also all of its macOS apps -- everything from bundled apps such as Safari and Photos, to paid content-creation apps such as Logic Pro X and Final Cut Pro X.

And this doesn't merely mean having macOS and Apple's apps powered by the M1's CPU and GPU. It also means rewriting the code so that, for example, less demanding tasks can be delegated to the M1's low-power cores (so as to improve battery life) and MacBook cameras can leverage the M1's image processor.

The company is also promising strong third-party developer support for "universal apps" whose binaries allow them to natively run on either M1 or Intel-powered Macs (Adobe (ADBE) is among the initial supporters). And though some of them will run better on a Mac than others, M1-powered Macs will -- since the M1, like Apple's A-series SoCs, is Arm-based -- be able to run iPhone and iPad apps.

Pulling all of these things off at once says more than a little about the long-term strategic benefits provided to Apple from providing end-to-end platforms that encompass silicon, hardware, operating systems, apps and services for several types of computing devices (with more possibly on the way).

4. It's Still Clear, However, That Apple's Mac Silicon Transition Will Take Some Time

GPU performance could be a consideration for some Mac models. While the M1's GPU is promised to strongly outperform the integrated Intel GPUs found in various low-end Macs, the situation could be different when it's pitted against a powerful discrete GPU.

But software compatibility is probably the biggest consideration. It will take a little while for the overwhelming majority of popular, third-party, macOS apps to be rewritten to natively run on Apple's SoCs. And while Apple is providing emulation software (known as Rosetta 2) to let apps written for Intel-powered Macs run on M1-powered systems, high-end users won't want to deal with the performance hit that typically comes with relying on emulation.

Things could look different 12-15 months from now, as developer support improves and Apple perhaps rolls out an M2 SoC that meaningfully outperforms the M1. But in the near-term, Intel-powered Macs will still likely account for a sizable percentage of Apple's Mac sales.

5. It's Worth Keeping Sight of Why People Buy Macs

Ask a few Mac users about why they use Macs rather than Windows PCs, and it's possible that they'll make note of hardware features such as battery life and display quality. And just maybe, things like reliability and Apple's customer support will get shout-outs.

But there's a pretty good chance that the users will start off by talking about macOS and/or some of the apps and services running on top of it. Historically, that's been Apple's biggest selling point for Macs, rather than hardware-related features.

And in that particular respect, Apple's migration to home-grown Mac processors represents more of an evolution than a revolution.

By making it possible to run iPhone/iPad apps on Macs and making it easier for iOS developers to create macOS versions of their apps, this migration should in time strengthen the Mac's software differentiation. But for many users, the daily experience of using a Mac powered by Apple silicon could -- battery life and performance gains aside -- still feel a lot like the experience of using an Intel-powered Mac.