While markets were disappointed with Intel's (INTC) numbers, they were more pleased with the ones shared by one of Intel's biggest chip equipment suppliers, as well as those shared by another major supplier to PC/server OEMs and cloud giants.

Here's a run-down of some notable takeaways from Intel, ASML (ASML) , Lam Research (LRCX) and Seagate (STX) 's earnings reports and calls, each of which were delivered over the last week. 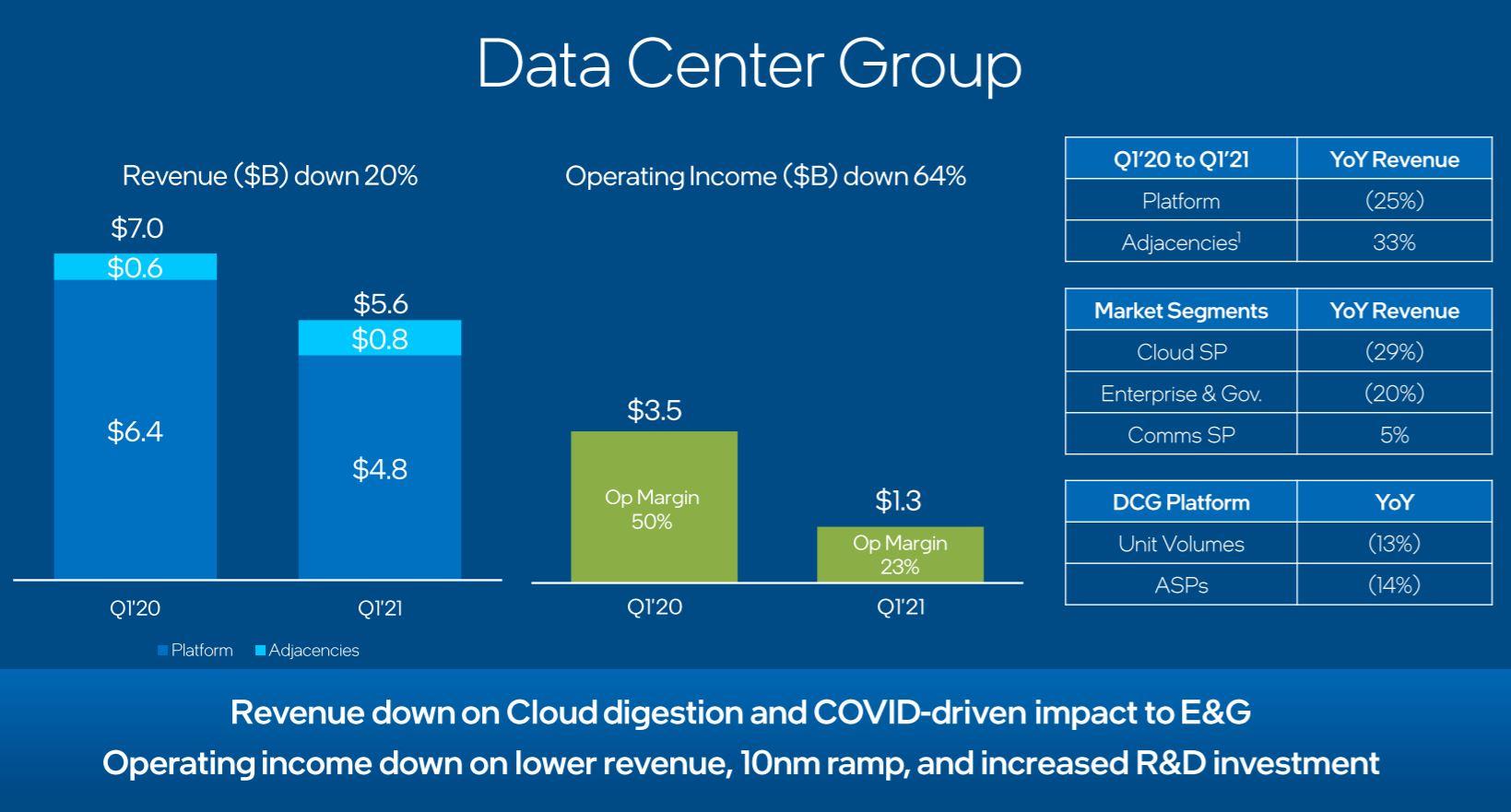 Intel blamed a tough annual comparison for cloud sales, ongoing COVID-related pressures within the enterprise server market and inventory digestion by cloud giants ahead of the rollout of its Ice Lake Xeon server CPU line. But the magnitude of its cloud decline, together with the fact that it announced the start of Ice Lake shipments in January, signal share loss to AMD (AMD) and ARM server CPU developers. I'm pretty sure that AMD will report a very different annual growth rate for its server CPU business on Tuesday afternoon, even though it's dealing with supply constraints and (like Intel) was going through a product line transition in the first quarter.

Moreover, while Intel guided for DCG revenue to be up sequentially, its guidance for total second-quarter non-GAAP revenue of $17.8 billion (down 2-3% annually) suggests DCG revenue will once more be down annually, given that PC CPU sales are expected to be up again thanks to a booming notebook market.

2. Intel Is Being Aggressive With Its Foundry Strategy in More Ways Than One

Last month, Intel announced that it plans to re-enter the foundry (chip contract manufacturing) market and spend about $20 billion to build a pair of new fabs to service foundry clients. On Thursday, new CEO Pat Gelsinger said that Intel is engaged with "well over 50" potential foundry clients, while adding that Intel's advanced packaging technologies are drawing a lot of interest.

Notably, Gelsinger also said that Intel will let foundry clients design silicon featuring x86 CPU cores (currently available only via CPUs sold by Intel and AMD). He suggested that cloud giants are interested in the greater flexibility such products would give them to adjust things such as a CPU's memory hierarchy and networking capabilities, relative to Xeons sold by Intel.

Given what foundry margins are typically like, the margins that Intel would obtain on such CPU sales would almost certainly be lower than the margins it typically gets on Xeon sales to hyperscalers today. But given the competitive pressures Intel's server CPU business is now facing -- pressures that include efforts by Amazon.com  ( AMZN) and ( reportedly) Microsoft ( MSFT) to develop their own ARM server CPUs -- there's a certain logic to going in this direction.


3. Seagate -- Like Some Other Companies -- Is Seeing Traditional Enterprise Demand Rebound

In addition to reporting good demand from cloud giants for its high-capacity hard drives, Seagate disclosed seeing "strong double-digit growth" for both its high-capacity and mission-critical enterprise hard drives, after witnessing soft demand for them during much of 2020. The company also forecast enterprise demand would remain healthy through year's end, and it forecast demand for hard drives used for edge video storage and analytics would begin rebounding this quarter and continue doing so for the rest of the year.

Seagate's comments came a couple days after data warehousing hardware/software provider Teradata (TDC) pre-announced stronger-than-expected first-quarter numbers. While many on-premise IT hardware and software suppliers face major secular pressures from cloud adoption and are arguably value traps as a result, I think certain names with growth drivers, quality products and reasonable valuations are worth a look. Server OEM Supermicro (SMCI) is one of the names that I think fits this description. Hyperconverged infrastructure software supplier Nutanix  (NTNX) and machine data analytics software leader Splunk (SPLK) are perhaps also worth a look.

4. Chip Equipment Makers Have Dialed Up Their 2021 Expectations in a Big Way

With Intel and TSMC (TSM) having already set huge 2021 capex budgets, it was well-known going into earnings season that this would be a very good year for chip equipment makers. Nonetheless, some of the numbers shared by ASML and Lam still managed to raise eyebrows.

ASML also said it now expects its sales to foundry/logic and memory clients to respectively be up 30% and 50% this year, up from prior guidance for 10% and 20% growth. Look for KLA  (KLAC) to also share an upbeat outlook when it reports on Thursday.

ASML actually kept its 2021 EUV revenue guidance unchanged, while indicating that its EUV sales will be up strongly next year as it works to ramp production. And while its 2021 DUV guidance was hiked, the company reported DUV is also now supply-constrained. Indeed, CEO Peter Wennink went as far as to say that if ASML's expected 2021 sales to China (now a major DUV buyer) were impacted by "geopolitical roadblocks," ASML would just ship that hardware to clients elsewhere.

Consider this one more bottleneck for a chip industry already dealing with shortages for automotive chips, LCD controllers, GPUs and a variety of other silicon, not to mention chip assembly/testing capacity. While not good news for the industry, these shortages do mean that -- as strong as growth is for many companies right now -- there's currently a lot of unmet demand for various products that will likely end up being addressed down the road.

(AMD, Microsoft and Amazon are holdings in Jim Cramer's Action Alerts PLUS member club. Want to be alerted before Jim Cramer buys or sells these shares? Learn more now.)

Get an email alert each time I write an article for Real Money. Click the "+Follow" next to my byline to this article.
TAGS: Earnings | Investing | Semiconductors & Semiconductor Equipment | Technology | U.S. Equity