Intel's (INTC) anticipated Q4 report and earnings call featured an encouraging remark or two about the chip giant's long-term plans under new CEO Pat Gelsinger. But it also left a lot of questions unanswered -- both about its manufacturing plans and how it sees demand trending during a competitively challenging 2021.

To recap: Intel, which is giving back a chunk of its recent gains on Friday, soundly beat Q4 estimates thanks to a 30% increase in notebook CPU sales, a smaller-than-expected 16% revenue decline for its server CPU division (the Data Center Group, or DCG) and 33% Mobileye growth. But its revenue was nonetheless down 1% annually in the midst of a chip industry boom.

Likewise, though Intel's Q1 sales guidance topped consensus by $2 billion after backing out a $500 million customer prepayment and including revenue from its NAND flash memory business (set to be sold to SK Hynix), that adjusted figure still implies a 9% annual drop, with DCG declines expected to more than offset continued notebook strength.

What's on everyone's minds, of course, is what Intel didn't share: It didn't issue full-year guidance, and it didn't spell out just how much it plans to rely on foundries such as TSMC  (TSM) and Samsung for CPU production as it deals with the fallout from its 7nm manufacturing delays. The full-year guide is promised to arrive by Intel's April Q1 report, while 2023 manufacturing plans are promised to be shared after Gelsinger, who is set to become CEO on Feb. 15, officially takes over.

Gelsinger and departing CEO Bob Swan did drop some hints about how Intel is thinking about manufacturing, however. Specifically, Gelsinger forecast that "the majority" of the products that are part of Intel's 2023 roadmap will be made internally, albeit while adding that it's likely Intel will rely more on foundries "for certain technologies and products." And Swan suggested Intel's planned use of disaggregated CPU designs featuring "chiplets" that are connected using Intel's 2.5D and 3D packaging tech would allow it to launch products featuring a mixture of Intel-manufactured and foundry-manufactured silicon.

It's easy to imagine Intel going in a similar direction with its planned 2023 PC and server CPU platforms (Meteor Lake and Granite Rapids, respectively). Specifically, Intel could have TSMC and/or Samsung make the logic chiplets for its high-end CPUs using their cutting-edge 3nm processes (set to enter volume production in the second half of 2022), while complementary silicon is made using Intel's 7nm process, as are all of the chips going into less powerful Intel CPUs that launch in 2023.

If this was to happen, Intel's high-end CPU margins would take a hit. But in return, the company could actually have a process edge in 2023 against AMD, which will be migrating to TSMC's 5nm node in 2022. And between Intel's earnings call remarks, TSMC's aggressive capex plans and Gelsinger's recent remarks to Intel employees about wanting to "deliver better products to the PC ecosystem than any possible thing" that Apple (AAPL)  makes, it does seem as if the groundwork is being laid for a move along these lines.

Also: Bloomberg just reported that Samsung is thinking about spending more than $10 billion to build a 3nm plant in Austin that could "begin operations as early as 2023." If Samsung went through with this (and made good on its aggressive reported timetable), it could give Intel a way to leverage a cutting-edge foundry process while keeping at least some of the production inside the U.S.

But until Intel formally reveals its 2023 manufacturing plans over the next couple of months, this feels like a guessing game. And in the meantime, Intel clearly has its hands full competing against AMD and ARM CPU developers while relying on a 10nm process node that seems to be forcing it to make some difficult trade-offs between core counts, clock speeds and power consumption.

While DCG's sales are currently pressured by a weak demand environment that's likely to improve later in 2021, share losses to AMD and to a lesser extent ARM server CPU developers are also clearly a headwind, as is the price pressure caused by tougher competition. What's more, Swan indicated on Intel's call that the production ramp for Sapphire Rapids, the first 10nm Intel server CPU platform to leverage its advanced SuperFin transistors, has now been fully pushed out into 2022. This means Sapphire Rapids might be arriving around the same time that AMD launches Genoa, its first server CPU platform to rely on TSMC's 5nm node. 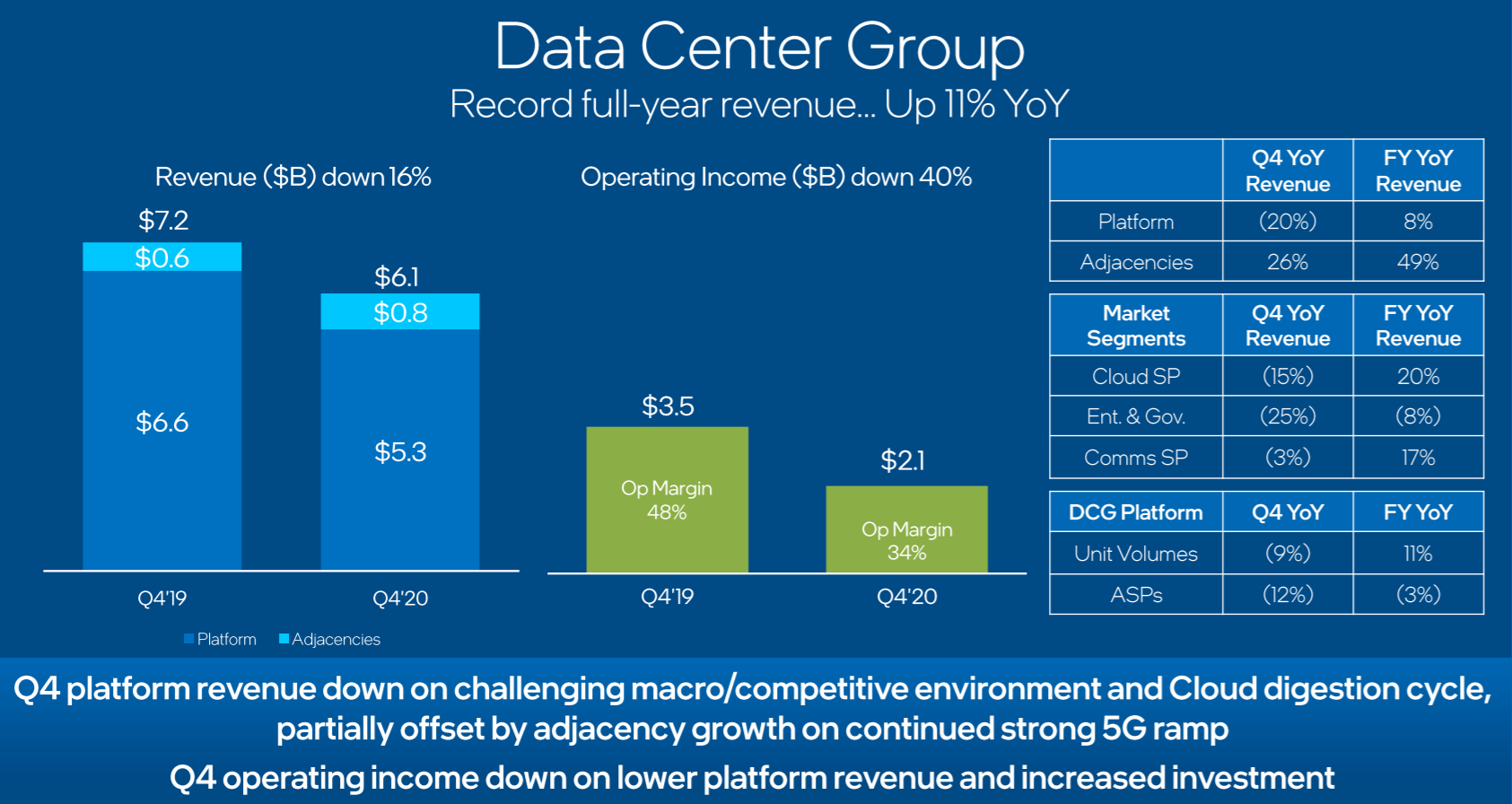 Intel's PC CPU sales are faring better right now in spite of stiffening competition from AMD, as the shift to remote work and learning continues leading notebook sales to surge. But CFO George Davis did caution that Intel expects PC demand to cool some later this year, and while Intel's notebook CPU volumes rose sharply in Q4, its notebook CPU average selling price (ASP) fell 15%. A jump in Chromebook and low-end Windows PC sales weighed on ASPs, but so did the start of Apple's efforts to migrate its MacBook lineup to its own processors. 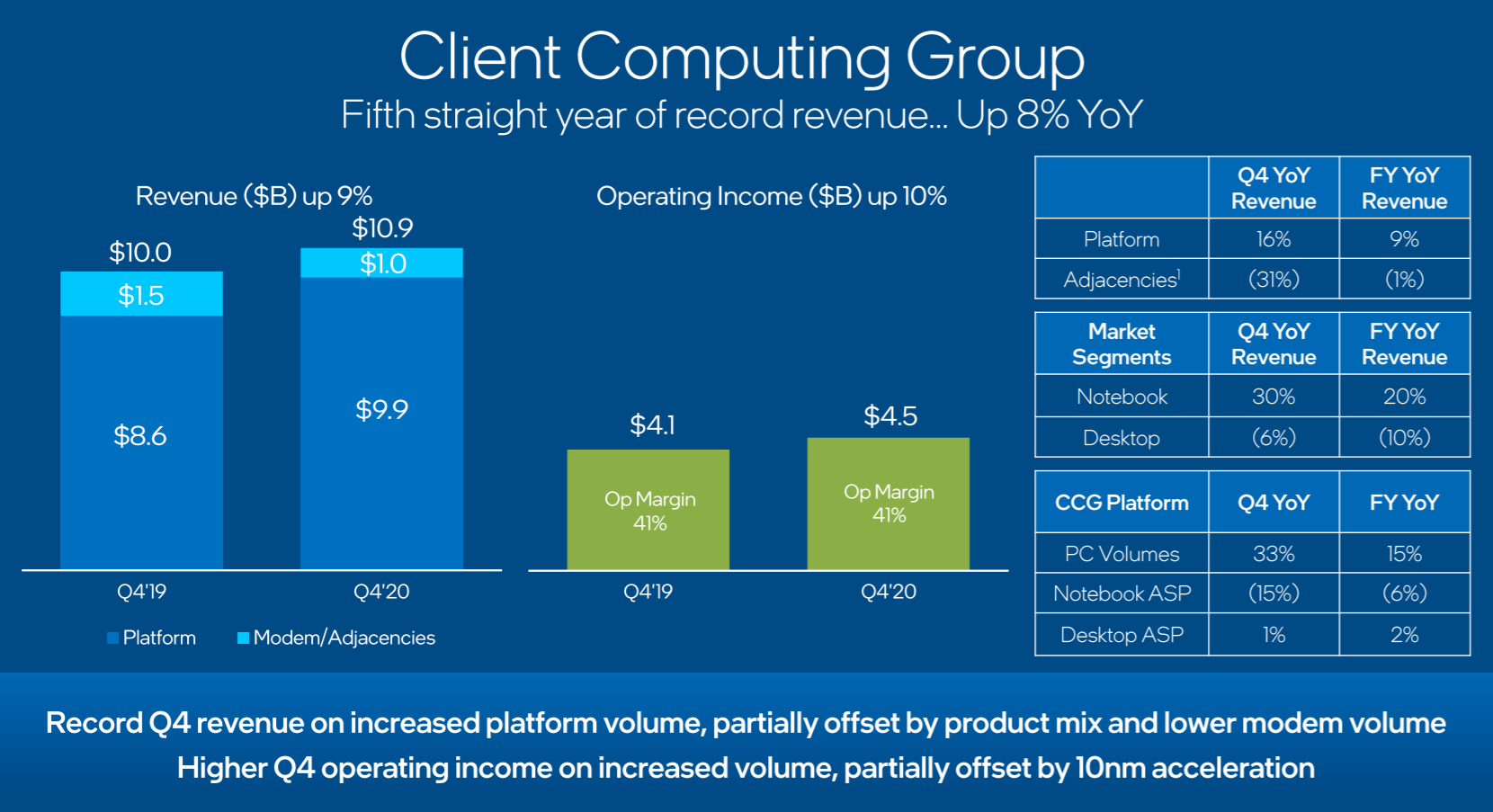 If there's a clear positive to Intel's story at this moment, it's that Gelsinger looks like a very solid choice to lead the company going forward, given his technical acumen, leadership experience, historical ties to Intel and apparent willingness to back out-of-the-box solutions to difficult problems. Also, judging by some of his Thursday remarks, Gelsinger seems quite eager to reverse the brain drain that Intel has seen in recent years.

And if Gelsinger & Co. outline plans to use TSMC and/or Samsung to help deliver highly competitive 2023 PC and server CPU lineups in spite of Intel's manufacturing stumbles, it's easy to see Intel's stock, which is still trading at pretty subdued multiples, getting a pop on the news.

That said, given all of the things that Intel declined to share on Thursday, making such a bet does carry some risks -- both due to the possibility that Intel's 2023 manufacturing plans might be more conservative than hoped and the risk that its 2021 guidance (when it arrives) will end up being downbeat due to the competitive headwinds it's currently dealing with.

AMD and Apple are holdings in Jim Cramer's Action Alerts PLUS Charitable Trust Portfolio. Want to be alerted before Cramer buys or sells these stocks? Learn more now.