Following a 2021 that saw incredible amounts of excess in parts of the tech sector, 2022 might end up being a hangover period for certain companies and assets.

But with many of the secular growth trends that have driven tremendous sales and earnings growth still going strong, and with many tech stocks having either come back to Earth or not really been caught up in the excesses to begin with, it's not all doom-and-gloom for tech heading into the new year.

Microsoft (MSFT) is the only one of the big-5 U.S. tech giants that hasn't been seeing major antitrust heat from U.S. and EU regulators in recent years. And it's probably not a coincidence that Microsoft has also easily been the most acquisition-hungry of these companies, spending over $60 billion since 2016 to buy LinkedIn, GitHub, Bethesda Softworks and (assuming the deal closes as expected in the first quarter) Nuance Communications (NUAN) , while also acquiring dozens of smaller companies and business units.

Satya Nadella & Co. are undoubtedly aware that their ability to have multi-billion dollar deals cleared by regulators during a time when other U.S. tech giants are generally gun-shy about M&A due to regulatory heat is a valuable comparative advantage. Pair this with a high stock price, favorable debt markets and a strong balance sheet and cash-flow profile, and odds are good that Microsoft will announce another big acquisition before 2022 ends. At least unless they start facing the same kind of antitrust pressure that fellow tech giants are seeing.

10. Amazon Sees Payoffs for Its Efforts to Revamp AWS and Its Grocery Ops

Look for both of these efforts to start yielding results before 2022 is over.

In spite of Microsoft and Alphabet's (GOOGL) also-massive cloud investments, AWS' revenue base, feature set, developer support and software/services ecosystem all remain unmatched among public cloud platforms. These advantages should serve it well as Selipsky tries to get AWS to spread its wings some more. And the lack of a delivery fee for Prime members on most orders made via the Amazon Fresh grocery delivery service (a feature made possible by the cost advantages granted to Amazon by its fulfillment and delivery assets) gives Amazon a valuable competitive advantage once it adequately scales out Fresh's product selection, inventory and reach.

11. 'The Metaverse' Goes Through Its Trough of Disillusionment

Following months of incessant hype from businesses, the media and crypto/Web3 projects, it's safe to say "the metaverse" -- loosely defined as a network of 3D virtual worlds that deliver a variety of social, entertainment and commerce experiences -- is at or near its "peak of inflated expectations," as defined via research firm Gartner's Hype Cycle methodology. 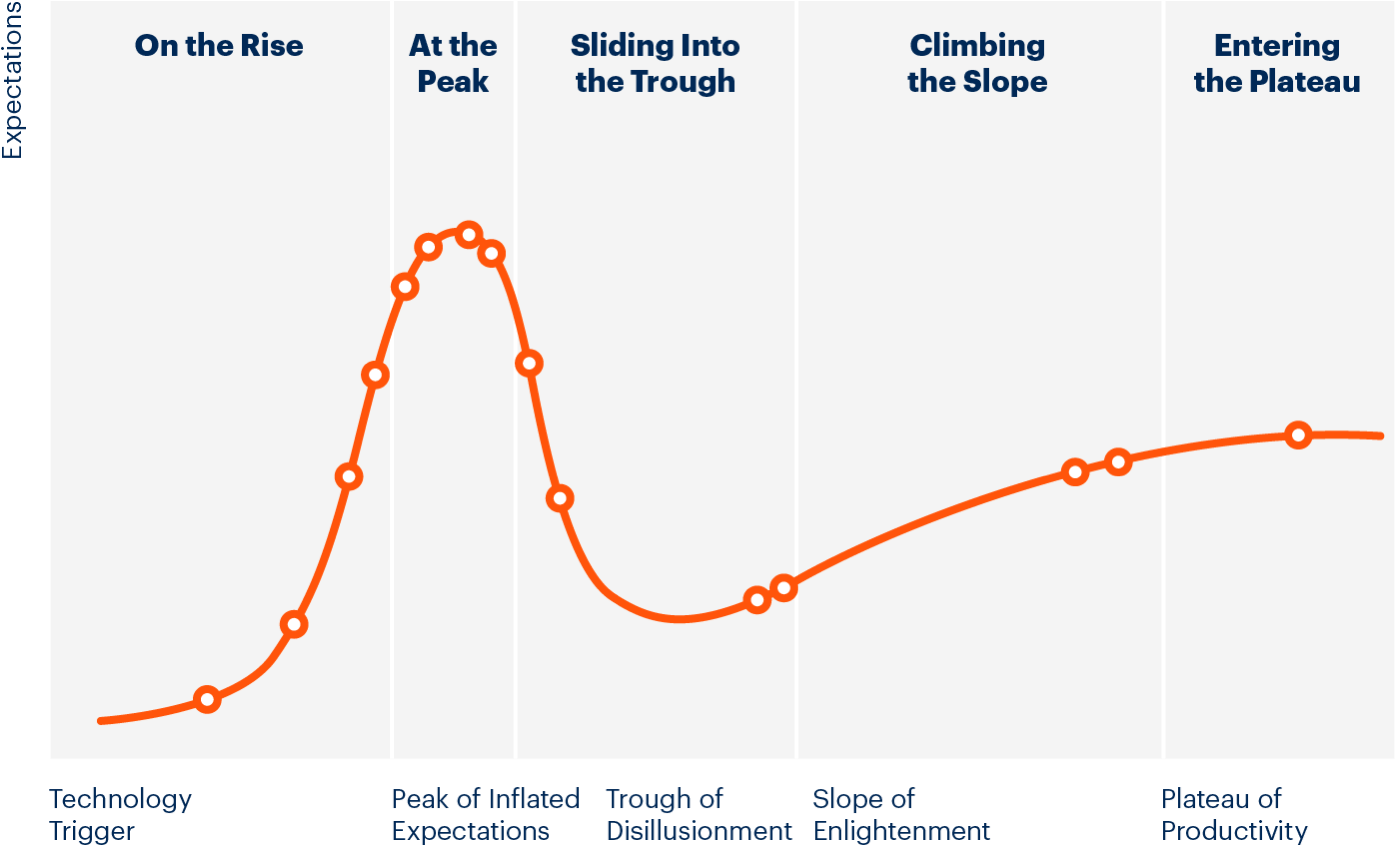 Look for a plunge into the "trough of disillusionment" -- a shakeout period when interest in a previously hyped technology wanes and weaker players are driven out -- to happen as 2022 progresses. The shortcomings of current, self-styled, metaverse platforms, whether in terms of usage/network effects, visuals/load times or the quality of the social, entertainment and commerce experiences they deliver, will get a lot more scrutiny (as it is, some of the shine has begun coming off both centralized and decentralized would-be metaverses). Likewise, more scrutiny will be given to how much further popular gaming platforms seen as metaverse precursors have to go before non-gaming activities are seen as a primary use case by the average user.

That said, the trough of disillusionment also tends to be a time when real progress is made by surviving companies/projects towards realizing a technology's long-term promise. Meta Platforms (FB) , which is seeing strong Oculus headset growth off a relatively small base, is clearly intent on spending whatever it takes to realize Mark Zuckerberg's metaverse vision. And before 2022 is over, Apple (AAPL) , which from all indications is looking to launch a high-end AR/VR headset before year's end (and then a pair of AR glasses later on), might also make some noise.

As of this moment, there are (per CoinMarketCap) more than 90 cryptocurrencies with $1 billion-plus market caps based on their circulating token supply, with the coins collectively having a roughly $2 trillion market cap between them. And those figures grow significantly if (as one really should) one values tokens based on their total supply.

Along with Bitcoin and Ethereum, the tokens with $1 billion-plus valuations include some other legitimate projects with meaningful developer support, such as Solana, Terra and Avalanche. But they also include a very long list of me-too and vaporware projects that for now are seeing little or no user/developer adoption, as well as some tokens (think Dogecoin or Shiba Inu) whose owners generally have no illusions about how they simply view the tokens as a way to quickly make some money.

And across both the more and less legitimate projects, there has been a ton of social media-fueled Ponzi-like behavior taking place, as many token owners create echo chambers in which they breathlessly hype up their favorite coins (often while making outlandish price predictions) in the hope of attracting greater fools whom they can eventually sell to for large gains.

As many others have also argued, this is bound to end badly for a lot of the people who have been getting in late (perhaps it has already begun to). And as it does, the ranks of angry, burned speculators will swell, likely fueling a push for greater regulatory oversight of an asset class that has been something of a Wild West for financial markets.

As was the case for the 1999/2000 Internet bubble, the fact that there's been a lot of speculative insanity in the crypto/Web3 world doesn't mean the space isn't also party to business and tech developments that are likely to have major long-term impacts.

While much of its current activity is tied to crypto asset speculation, the long-term potential of decentralized finance (DeFi) to allow consumers to both access and provide a number of financial services without the involvement of any financial institution is nothing to scoff at. Likewise, though stablecoins are primarily used today for crypto trading, they can also enable low-fee commerce transactions and cross-border payments (just ask Meta). And while it's early, play-to-earn (P2E) gaming opens the door for many consumers to pay less on average for gaming experiences (with a subset coming out ahead).

Meanwhile, pending Ethereum 2.0 (Eth2) upgrades should significantly lower the gas fees that have made many services relying on Ethereum (still by far the most popular blockchain for running decentralized apps) unaffordable to consumers with modest assets. Throw in the store-of-value arguments that continue to be made for Bitcoin/Ethereum, and there's a case for patient investors to sift through the rubble for deals once a lot of speculators have been driven out.

Following a pretty strong 2020, 2021 was more of a mixed bag for consumer Internet stocks, as pandemic-related demand trends cooled off (and in some cases, reversed) and Apple's user-tracking policy changes dinged the online ad industry. As a result, quite a few consumer Internet stocks finished 2021 well below their 52-week highs and sporting reasonable forward earnings and/or sales multiples.

With a lot of these firms still possessing clear secular growth drivers for the next several years or longer, and (as noted while discussing tech prediction #2) with many consumer Internet companies possessing inflation-resistant business models, there's a good chance this space will see meaningful M&A activity in 2022. Both larger tech companies and private equity firms might circle the waters.

15. IT Security Spending Has a Banner Year

2021 was a good year for IT security spending: Gartner forecast in May that (after a relatively sluggish 2020) information security and risk management spending growth would nearly double in 2021 to 12.4%, and judging by the earnings reports that major security tech players have posted since then, there's a decent chance growth met or exceeded that forecast.

There are plenty of reasons to think that in spite of tougher comps, IT security spending growth will top 10% again in 2022. One survey after another points to security spending being a major priority for IT execs, as they try to give remote workers secure access to IT resources and protect their organizations from things like ransomware attacks, malware-enabled data breaches and increasingly sophisticated phishing attacks.

Among the likely priority areas: Endpoint security software and services, identity and access management (IAM) solutions for authenticating users and managing their access to apps and services, and cloud-based secure access service edge (SASE) platforms that deliver secure connections to users/devices located both inside and outside of a company's firewalls.

All of this helps explain why Netflix (NFLX) (now bundling mobile games with streaming subscriptions) and Amazon (launched hit massively multiplayer online role-playing game New World in September, and is now providing Prime members with free games) have gotten gaming religion lately. Look for the same to happen to more prominent tech and media companies in 2022.

(AAPL, GOOGL, AMZN, and MSFT are holdings in the Action Alerts PLUS member club. Want to be alerted before AAP buys or sells these stocks? Learn more now.)