"Fire for effect." Those three words, to anyone who has ever had the pleasure of fooling around with mortars or artillery, simply means one thing. After feeling around with probing fire, that last one hit the target area. Stop screwing around with the coordinates. The next command will let you know how many rounds, probably high explosive, (and what kind of fuse... do you want to rain shrapnel down on an enemy out in the open, or dig into an entrenched position?) are going out in succession. Four of five rounds? Okay. Twenty of 25 rounds? What the heck did the FO (Forward Observer) run into out there?

You know who was on the mark this quarter? Target (TGT) , that's who. Remember, 24 hours ago... I wrote to you just yesterday that I liked and even root for Walmart (WMT) ? Well I do, but I also told you that I was long Target. Why? Because there is room for the two of them. Three if you count Costco (COST) , four if you count Amazon (AMZN) , but those two are differentiated in enough ways as to be alternately categorized. Walmart and Target are head to head competitors in each and every way. Walmart is many times bigger, hence, any growth in the big box space will be magnified at Target. That is exactly what has happened as the pandemic impacted environment evolved into the stimulus check environment. Oh, and the CEO, Brian Cornell is a master of execution. Just sayin'.

For the first quarter, Target reported adjusted EPS of $3.69... beating Wall Street by almost a buck and a half, good enough for earnings growth of (wait for it...) 525%. GAAP EPS of $4.17 more than doubled expectations. Yes, the adjustment reduced, not enhanced, the non-GAAP results due to a profitable sale of Dermstore that was ex-operational. Revenue generation landed at $24.2 billion, also beating the tar out of the street (get it?) and growing year over year by an incredible 23.3%. Comp sales screamed higher by 22.9%. Consensus? About 11%. These numbers just blow me away. My only defense as a Walmart fan is that though by all metrics Target is outperforming Walmart, Walmart still produced $138.3 billion in revenue. So, the models are similar, but Target is a battleship to Walmart's Carrier Group.

Perhaps most impressive is Target's reported breakdown of that 22.9% comp sales growth. Store comp sales growth printed at 18.3%, digital sales increased 50.2%, led by drive up growth of 123%. You'll recall that Walmart experienced e-commerce growth of 37% for the quarter. So, we have the collision of the first tougher comps (as it was in Q1 2020, that desperate and locked down consumers turned to the internet for nearly all of their shopping), and the late Trump/early Biden infusion of helicopter payments in addition to beefed up jobless benefits that resulted in robust readings for March Retail Sales.

As I do not see any significant changes to the balance sheet, there is no real need to go there. As for the third and fourth quarters, Target now sees positive single digit comp sales growth. In addition, Target looks for operating margin to easily beat FY 2020's 7%, and potentially reach 8%. 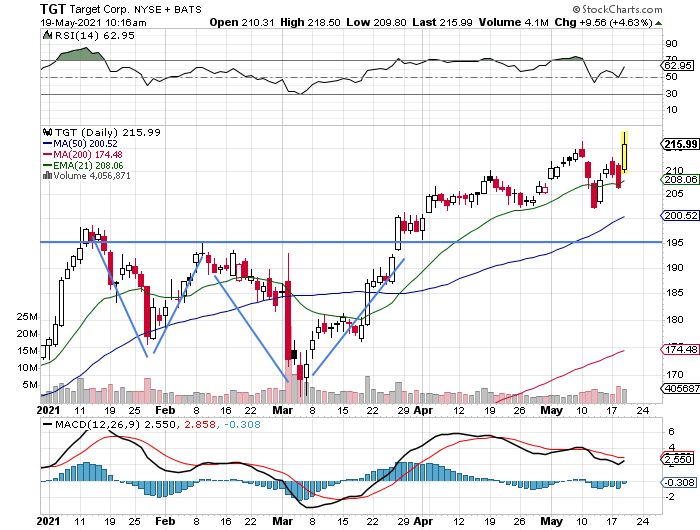 Wednesday's counter trend rally is nice for this name. As I write this piece, I see only three of my long positions shading green... Target, Walmart, and the SPDR Gold shares ETF (GLD) . That said, this earnings inspired rally does nothing to change technically what I am doing in the stock.

The shares continue to rally off of a "double bottom" breakout in late March with a pivot of $195. Fortunately, the shares are not yet quite overbought, and the daily MACSD is set up for a bullish cross-over. This could/should provide an algorithmic boost to the shares after the swing traders are done. The shares are getting away from the 21 day EMA.

(Walmart, Costco and Amazon are holdings in Jim Cramer's Action Alerts PLUS member club. Want to be alerted before Jim Cramer buys or sells these stocks? Learn more now.)

Get an email alert each time I write an article for Real Money. Click the "+Follow" next to my byline to this article.
TAGS: Earnings | Economy | Investing | Stocks | Technical Analysis | Trading | Retail | E-Commerce

Imagine if the SEC did not prohibit underwriters from lending out shares to short-sellers for 30 days after an IPO?

What Is 'Margin of Safety' and Why Is It Important?

This is a key concept to investing, yet I still get questions about it often. Let me explain what it is and how to use it to your advantage.

Is This Up and Down Market Turning You Upside Down?

Earnings are better than expected, the indexes won't budge and half of investors haven't seen a correction in a year while the rest have seen their stocks go down. What's up?