On The Origin Of Species

The controversial text authored by Charles Darwin was first published in 1859. Parts embraced by science. Interpretation rejected by a number of religious authorities. I referred to the text this morning after reading through a number of earnings calls. I referred back after Target (TGT) released Q2 data this morning. Incredibly, forget creation versus evolution, or some compromise between the two. That's someone else's fight. I have both political and religious views. You did not come hear to read that.

Darwin's chapter 3 deals with the Struggle For Existence, especially among organisms of the same species. Chapter 4 goes through the concepts of Natural Selection and results with what is now known as "Survival of the Fittest." Chapter 5? The impact of changed conditions. Use, Disuse, and the economy of growth. Quite frankly, Darwin's original text presents not just in theory, but as current history where as the state of the U.S. retail industry is concerned.

It becomes quite obvious, as the culture of consumerism has evolved, that what matters is the ability to adapt (tariffs, automation), the ability (more than ever) to benefit from scale, to have in place, advanced methods and infrastructure to distribute, and to execute all of the above at a high levels across multiple (omni) channels. More than a month ago, Jim Cramer created the acronym "WATCH" ... Walmart (WMT) , Amazon (AMZN) , Target (TGT) , Costco (COST) , and Home Depot (HD) . Others will at times excel, see Lowe's (LOW) this (Wednesday) morning, but where Jim was going with that theme was simple. Scale. Execution. Innovation. Only the strong survive? Retail 2019.

For the firm's second quarter, Target posted EPS of $1.82, a serious beat, on revenue of $18.42 billion, up 5% year over year, and also a nice beat. Inside the numbers... Target benefited from comparable sales that rose 3.4%, above consensus and up 10% over a two year period. Recall, Walmart is also seeing comp sales among the strongest in a decade. Digital sales saw a 34% increase. Gross margin increased. Operating margin increased dramatically. Oh, and Target raised full year guidance as well. The firm upped 2020 EPS to $5.90-$6.20 from $5.75-$6.05. Street consensus had been $5.93. The firm also retired 4.3 million shares through $341 million spent on repurchases. I also think it's important to note that for the quarter, cash provided by operations increased to $2.812 billion (+3.2% y/y), while expenditures for property and equipment declined to $1394 billion (-24.9% y/y). That's execution. 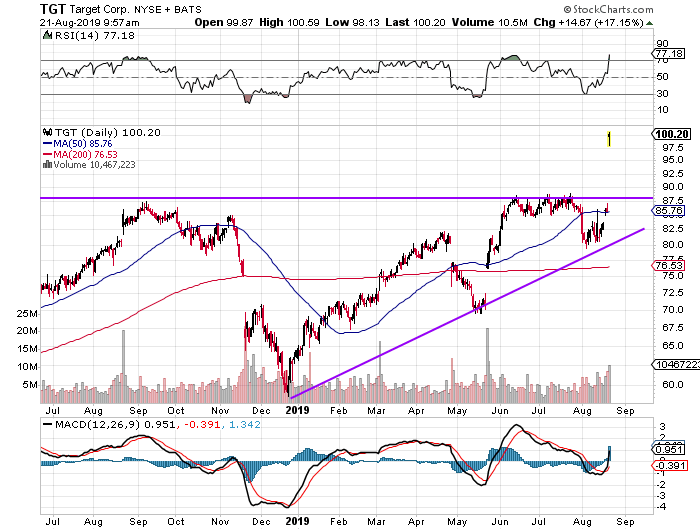 While the series of higher lows looks suspect as there have really only been three bottoms over the past nine months, there is no arguing the technical impact of the Wednesday morning break-out. We are looking at an absolute risk on move in response to the smashing of a year long, confirmed resistance level that had withstood multiple tests. I am long these shares, only since last week. The idea was to try to capture a quick 20% in response to earnings. Mission accomplished. I will sell something this morning, as discipline demands.

That said, I am not even thinking of liquidating the position. My new target price will be $110. I fully intend to add the 20% to 25% of the position that I sell up here once I see a discount. I am thinking $95-ish, though I have not reset add levels or panic points as of yet.

(Amazon and Home Depot are holdings in Jim Cramer's Action Alerts PLUS member club. Want to be alerted before Jim Cramer buys or sells AMZN or HD? Learn more now.)