Is this the evolution of retail? Perhaps it is. For years they have all feared the Death Star, also known as Amazon (AMZN) . Many have fallen. Many still fall. At first there seemed to stand one champion among them. The old leader. Walmart (WMT) , the largest retailer in the U.S. needed to evolve to compete on many levels, and so they have. Yet, that old leader had a rival way back when, a rival with a somewhat similar business model that also refused to die. That challenger would be Target (TGT) . Now, perhaps Target, and that firm's turn-around makes them the most impressive story in the bunch.

Let's give credit where credit is due. Target CEO Brian Cornell took over the reins of this then troubled firm in 2014. He proceeded to rid the operation of money losing units, remodel the stores, and allow Starbucks (SBUX) inside. How inviting. It seems the plan has worked. Ironically, Cornell came with a Walmart background, having served as the CEO of Sam's Club from 2009 to 2012.

Target reported significant beats for first quarter EPS and revenue generation on Wednesday morning. The beats were themselves supported supported by comparable store sales of a quite robust 4.8%, well above consensus. Comp digital sales simply blew the doors off of the place at 42%, even better than the 37% that Walmart posted just last week. The point there is that these two are becoming effective competitors on Amazon's turf. Their many locations that allow for in-store pick-ups and shorten delivery times have made them viable.

Want more? You've got it. EBTDA? Crushed it. Operating Margin? Improved. In the age of the trade war. Walmart could not say that. So, as retailers across the nation blame lousy weather, or in the case of Nordstrom (JWN) actually owned their poor performance, it becomes apparent that it was either sunny on Target's side of the street, or the execution was simply excellent.

I came in flat this name. I had a feeling that these earnings would outperform the pack, but honestly I did not want to increase exposure to retail as the trade war heated up. My bad. Brian Cornell has truly proven that he is a winner, and that Target is a worthy competitor to the title. 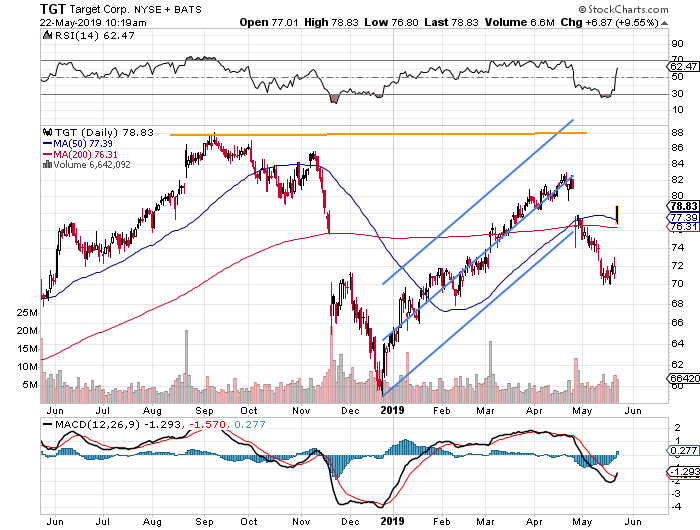 My problem here is that I do not see an easily recognizable technical pattern that presents as overtly bullish, despite fundamentals that are clearly improving. To me that means that I can tell which way the bus is moving, but I am having trouble identifying where the bus stops are. The stock has suffered two significant gaps to the downside over the past half year or so prior to this morning's gap higher.

What is someone like myself, who missed this move, but is still interested in owning these shares to do? I'm pretty sure that I do not want to grab the name on the pop. That's not my way. What I might try to do is wait to see if the shares can challenge the April highs in the $83 area. A take and hold there would be to me a higher probability play than just laying out the dough for the equity today. We get that action prior to Q2 earnings this summer, and technically, there would be a case for $90.

The Way To Do This (minimal lots)