Whoa! Target (TGT) just blew the numbers away. There is no doubt after the numbers posted by Walmart (WMT) and now Target that there is a huge advantage to being labeled an essential retailer during a pandemic. These two names, in particular... have both the size and scale to compete at least to some degree for the e-commerce dollar with the likes of Amazon (AMZN) . Not only will they go the last mile like Amazon, but consumers can pick merchandise up curbside as well.

For the firm's second quarter, Target reported GAAP EPS of $3.35, more than doubling expectations. The firm also posted revenue of $22.98 billion, good for growth of 24.8%, and also a serious beat. Comp sales? Sit down, you might not believe this. 24.3% versus consensus of "just" 7.6%. It gets better. Total transactions increased by a "mere" 4.6%, but average ticket size soared 18.8%, while digital sales skyrocketed an incredible 195%. Within that digital number was an incredible 700% rise in curbside pickup service. The digital business attracted 10 million new customers, by the way. These are not misprints. Operating margin, surprised huge at 10% versus the 5.7% that Wall Street was looking for.

Remember the weakness in apparel that Target experienced earlier in the year? Not this time. Target has several core businesses. Sales of electronics increased some 70% as folks prepared to work and learn from home. Home and Beauty, Food and Beverage, and Essential all saw growth of 20% plus, while even sales of apparel increased by double digits. That said, as the firm did not provide an outlook for the rest of the year, CEO Brian Cornell did acknowledge a lackluster "back to school" season. I don't think that comes as a shock to anyone.

I go through the consolidated statement of operations. I look at the consolidated statements of financial positions and cash flows. I am stunned at the cash. Cash provided by operating activities grew from August 2019 to August 2020, from $2.811 billion to $5.116 billion. Cash and cash equivalents increased from $1.656 billion one year ago to an incredible $7.284 billion as of the end of the period, while adding less than $1.5 billion in long-term debt at advantageous interest rates. In other words, these guys are flush with dough, while having effectively managed inventory. 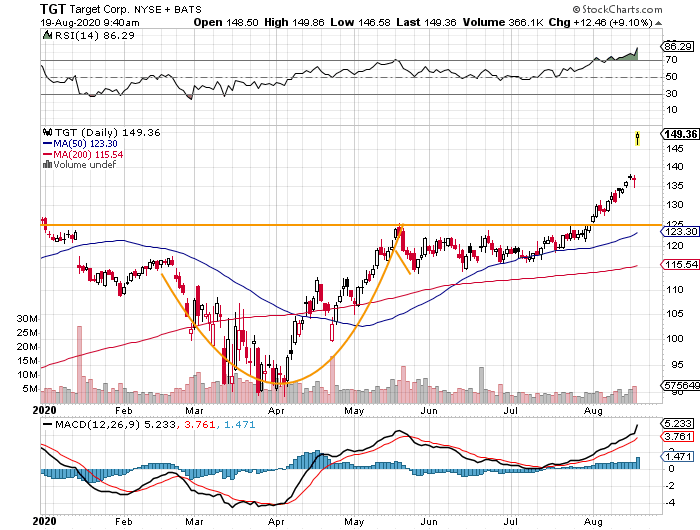 Took a while. Target finally got the breakout created by this past spring's cup with handle pattern. Does that set-up even count at this point? If it does, the "target" price would be a rough $150, meaning that this morning this stock is more of a sell than a buy. Even after such an amazing quarter. Sure, we have to let the analysts opine, and that will likely drag in some more capital. If long, investors could likely reduce net basis by selling (writing) short-term (expiration) calls against the equity stake.

Though I do expect the gap created this morning to at least partially fill either later this week or next, I would not be so brave as to short this name. Better to go out on something like a bear put spread if one is thinking short term (this Friday or next) bearish.

Get an email alert each time I write an article for Real Money. Click the "+Follow" next to my byline to this article.
TAGS: Earnings | Economy | Investing | Markets | Stocks | Technical Analysis | Trading | Retail | E-Commerce | Consumer Products