I often laud my favorite CEOs with high compliments for their obvious intellect, and their ability to see the paying fields unfold in front of them, often before it happens. I pound the table. praising the likes of Lisa Su at Advanced Micro Devices (AMD) , of Satya Nadella at Microsoft (MSFT) , and Jensen Huang at Nvidia (NVDA) . I had felt that way about former Lockheed Martin (LMT) CEO (current Executive Chair) Marillyn Hewson, and I am getting pretty close to thinking this way about Larry Culp at General Electric (GE) . How about Brian Cornell at Target (TGT) ? I mean this guy knows how to get on base, and if he does... he'll come around to score.

The real story here is one of terrific comparable sales performance and margin maximization in a pandemic environment. Comparable sales increased 20.5% year over year. This performance trounces the 17.5% growth that Wall Street saw coming. Breaking this down further, store comparable sales increased 6.9%, while digital sales (you may need to sit down) ramped 118% higher. Digital sales now account for two-thirds of overall comp sales growth, and also compare very favorably to the 69% growth posted for the quarter by Sarge fave and key competitor Walmart (WMT) .

As for those physical retail sales, the 6.9% growth reflects comparable growth in foot traffic of 6.5% coupled with a fantastic 13.1% rise in the average ticket. Included in the incredible digital performance is the simply unbelievable 212% increase in "same day services" that encompasses Pick Up, Drive Up, and Ship. Drive Up was the "driver" here at growth of 500% all by itself.

Not quite as "eye-popping" as comp sales, but very impressive indeed, was margin performance. Gross margin for the quarter printed at 26.8%, in line with expectations, but up from 26.3% for Q4 2019. According to the material provided by the firm, this reflects the benefit of merchandising actions, especially low markdown rates, that was partially offset by the impact of higher expenses related to digital fulfillment and the supply chain. Operating margin landed at 6.5% of sales, edging consensus of 6.4%, and significantly improving upon the 5.1% pre-pandemic performance of the year ago period.

If there is a negative, and this is probably why the shares waffled a bit prior to the opening of the market's regular session when the shares got some upside momentum going, was the lack of guidance. Target did not provide guidance for sales or profitability for the coming year or beyond. Wall Street did not like that initially, but I think it's completely understandable, and the street will I imagine line up behind Target after looking at the numbers. I don't see anything just yet.

At first glance, I thought I saw a basing pattern developing at the end of a long, and glorious nearly year long ascent. Then, I took a closer look at the upper right side of the chart... 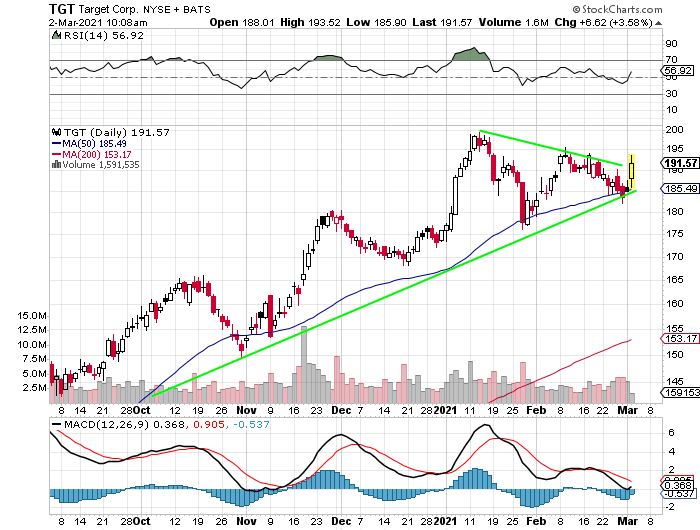 Turns out, my flat base was really more like a six or seven week pennant formation, complete with a series of lower highs as well as the 11 month series of higher lows. You know what that means. Pennants or Flags tend to end with an explosive move in one direction or the other. Today's post-earnings release action is witness to that concept.

Now, if this were indeed a basing pattern, the pivot would be the $200 spot, and bottom line support would be around $176, leaving us plenty of room to play with. No matter which chart you look at, you quickly see that buying these shares at the 50 day SMA has worked since late last spring.

So, this is my predicament. I would like to already be long Target, but I am not long Target. There is a pattern that shows regular support at the 50 day (blue) line. That's currently the $185 level. The $176 level looks like the breaking point. I'll go out a month and a half. Here's my idea.

Addendum: Target had it's own flash crash just after 10:30 ET on Tuesday morning. I initiated the name with an entry level sized long position at $175 on that dip. The following example is still a good idea, however due to the extreme volatility in this name today, strike prices and premiums mentions must be treated as subject.

The concept: This trader does not want to chase TGT on a day where the shares are trading higher. Selling the $185 puts opens up the trader to equity risk in six weeks at a discount, and gets the trader paid to wait. The purchase of the put with a strike price slightly below perceived support allows the same trader to limit the risk in the event of disaster.

I don't know what happened after 10:30 ET, but I did initiate an entry level sized long position at $175 on that dip. Watching carefully now.

(AMD, MSFT, NVDA, and WMT are holdings in Jim Cramer's Action Alerts PLUS member club. Want to be alerted before Jim Cramer buys or sells these stocks? Learn more now.)