Coric said he's very excited for their new "Take back today" campaign which aims to create an online community for migraine sufferers to help spread the word that there are better options available.

While Nurtec is currently approved for acute migraine treatment, Biohaven has also filed with the FDA to use the drug as a preventative measure for migraines as well.

We looked at the charts of BHVN on April 9 and concluded at that time that, "You can't rush drugs to market and you can't rush a market bottom. Every stock takes its own path at its own pace. Right now I do not see enough evidence that BHVN has bottomed and an upside move is pending. Avoid for now." Not one of my better calls as prices have more than doubled from that date.

Let's check out the charts again and see if we can be more constructive.

In this daily bar chart of BHVN, below, we can see prices made a low in March and a retest in early April. Prices rallied in the second half of April and in May we can see that BHVN moved above the moving averages which had turned positive. Chart resistance in the $50-$60 area was overcome by the end of May.

The On-Balance-Volume (OBV) line was strong from April into June telling us that buyers of BHVN were more aggressive. The OBV line has declined from June into July and has diverged bearishly from prices which have continued to move higher.

The Moving Average Convergence Divergence (MACD) oscillator made a peak in June and has been in a take profits sell mode.

In this weekly bar chart of BHVN, below, we can see a mixed picture. Prices are in an uptrend and above the rising 40-week moving average line. The decline earlier this year hurt the long-term pattern of higher lows but prices have rallied above the highs of 2019.

The weekly OBV line has been rising since April but it has not broken out to a new high like prices have - a bearish divergence. The MACD oscillator is fine and bullish.

In this daily Point and Figure chart of BHVN, below, we can see a potential upside price target of $94. 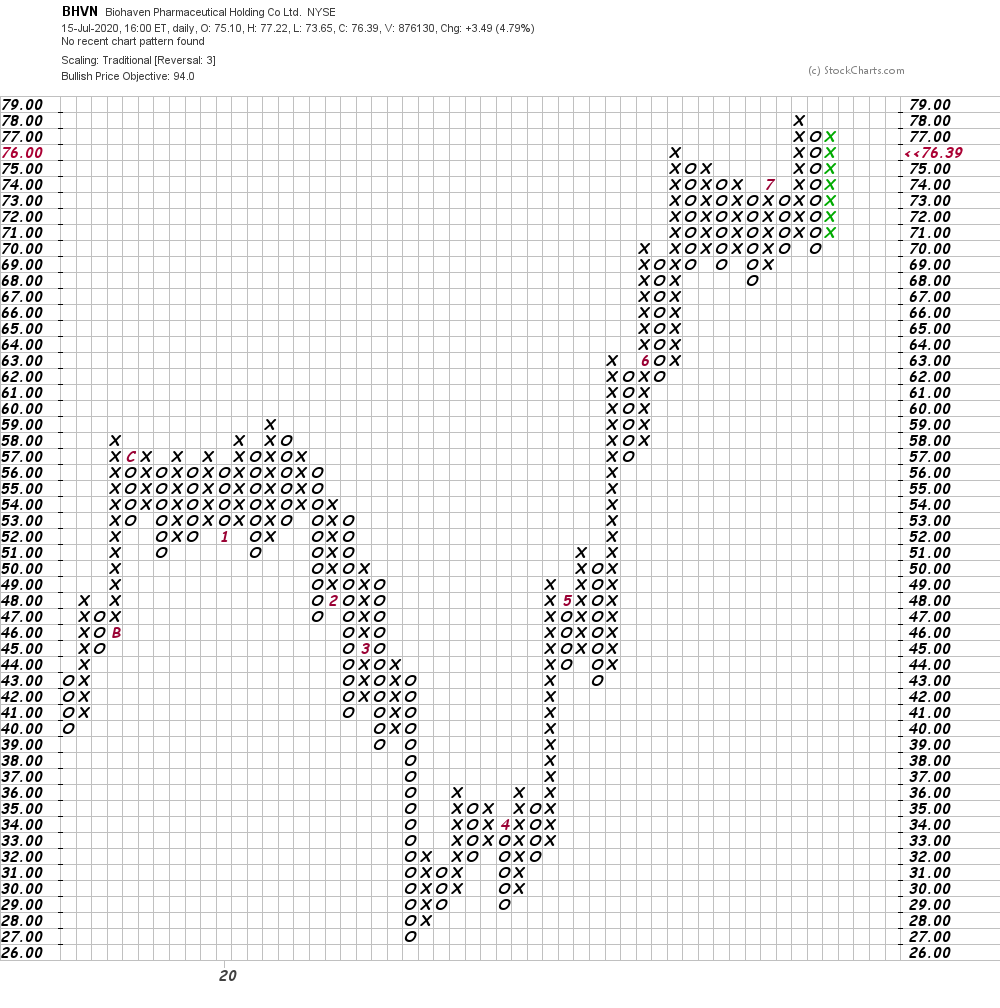 Bottom line strategy: BHVN has made a relatively big advance since April and a period of consolidation or sideways price action is probably likely at this time. With some bearish divergences seen in the daily and weekly OBV line I would wait before probing the long side despite a $94 price target from the Point and Figure chart.