Frampton comes alive... Okay, maybe not Peter Frampton, but would you believe Kohl's Corp (KSS) ? Okay, Kohl's came alive and it was like lightning. On Friday night, Kohls closes at $46.84, down 2.6% for the day. Trading at little more than six times forward looking (12 months) earnings, and just about 0.4 times trailing (12 months) sales. In other words, KSS has been a market dog with a sort of okay balance sheet, a decent enough 2.1% dividend yield, and a tangible book value per share of $34.73, meaning that the shares were trading at just 1.25 times tangible book. For comparison, Dillard's (DDS) traded at 2.89 times tangible book, while Macy's (M) trades at 3.93 times tangible book.

Clearly Kohl's, as the one department store with a working arrangement with Amazon (AMZN)  , has been undervalued by the marketplace for quite some time. Before we get into this, just a heads up, I was day-trading KSS through the pre-opening hours, and had a small long position in place when the call came in for a piece on KSS, so I do have a dog in the fight. I will not touch that position or do anything in KSS until after the piece I am currently writing actually hits publication.

The first hint of news came late Friday. The Wall Street Journal reported that a group led by Acacia Research (ACTG) , which is controlled by activist hedge fund Starboard Value had made a $9B ($64/share) offer to acquire Kohl's. At the time, this was more than a 35% premium to the stock's last sale.

It's not like it has been all quiet on the Kohl's front going into last week. Kohl's investor Macellum Advisors had already been pushing the stand alone (ex the mall) department store chain for a potential sale or change of leadership. In addition, Kohl's had received a letter from Engine Capital, another activist investor, in late 2021 suggesting that the firm either sell itself or spin off its e-commerce business. As if that was not enough, The Deal has reported that Oak Street Real Estate is interested in purchasing the real estate currently owned by Kohl's but not the stores themselves for $6B+.

By Sunday, after rumblings had been heard since Friday night, Bloomberg News had reported that private equity firm Sycamore Partners had reached out to Kohl's about making a takeover bid. By this time, Engine Capital had sent Kohl's another letter advising the firm to take the Acacia offer seriously. The Deal by now, had reported that Kohl's had retained Goldman Sachs (GS) as an advisor.

Finally, we now get to Monday morning. There are multiple reports across the realm of business media that there is interest in Kohl's coming from multiple directions. CNBC is now reporting that Sycamore Partners is willing to pay $65 per share for the firm, topping Acacia's bid. It remains unknown as I type this piece just how Sycamore would finance such a deal.

The point is that just a couple of days ago, Kohl's was an underperforming stock, and an undervalued business. Over the course of the weekend, it appears that Kohl's has at least two potential takeover bids, and a fairly attractive bid for the firm's land. What does CEO Michelle Gass do? She very well may not be part of the solution, but she will be part of the process. These bids must be taken to the board and whether or not there are other potential suitors must be explored. Myself? I always thought Kohl's was for sale, I just always thought it would be Amazon, as Amazon delves deeper into brick and mortar retail.

Sans an agreed upon deal, Kohl's is expected to report on or around March 1st. Wall Street is looking for EPS of $2.18 on revenue of $6.59B. That would be earnings "growth" of -1.8% on revenue growth of 11.9%, suggesting a growing business facing margin pressure, probably stemming from upward sloping compensation costs as well as continuing supply issues.

This morning, Cowen five star (at TipRanks) analyst Oliver Chen maintained his "outperform" rating on KSS while increasing his price target from $73 to $75. Chen believes that other strategic/financial bidders may crop up. In addition, Citigroup five star analyst Paul Lejuez maintained his "buy" rating on this name, while raising his price target to $73 from $67. Lejuez feels that Kohl's has been a mispriced asset at least since the Sephora partnership and that management is reacting appropriately and reasonably to this sudden burst of interest. 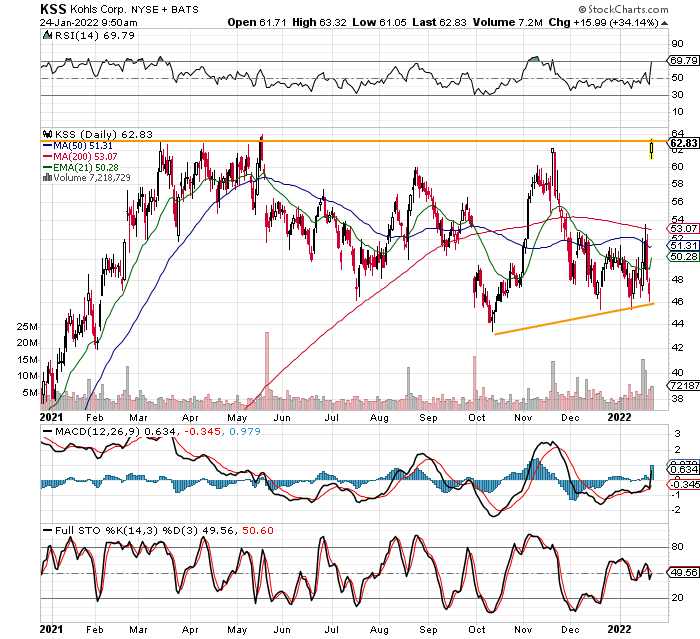 The good news? The stock has in one fell swoop retaken it's 21 day EMA, 50 day SMA and 200 day SMA. Should the last sale hang around up here, that will force a number of portfolio managers to increase exposure. That said, that last sale returns KSS to a level that has acted as staunch resistance, repulsing the stock right here on five separate occasions.

I wasn't invested in the name, I was trading. Given that I had to cease while I wrote this note, I see no reason not to try to ride this out and see what develops. Where there is smoke, there usually is some fire. I am thinking about selling February 18th $75 (covered) calls against my equity long for about a buck, while also selling March 18th $47.50 puts for roughly $1.40, as I don't mind adding shares back where they went out on Friday, and I definitely don't mind being paid to take on that risk.

Get an email alert each time I write an article for Real Money. Click the "+Follow" next to my byline to this article.
TAGS: Mergers and Acquisitions | Investing | Stocks | Technical Analysis | Trading | Retail