Pajama Trader 3: Iowa is a complete mess. They all think they won.

Pajama Trader 2: Nobody won in Iowa, and the virus keeps spreading....???

Pajama Trader 2: What if somebody actually loses in Iowa?

Pajama Trader 2: The survival rate is taking off, but borders are still closing. I don't know.

What exactly is our key takeaway from these markets. There are a few to be honest. I don't think any of them have to do with the political mess in Iowa, nor the "State of the Union" address scheduled for Tuesday night. Fact are facts, and while I think it premature to celebrate any early victory of modern science over a modern virus, the fact is that while the Wuhan coronavirus is still spreading, the rate for those who have fallen ill, eventually completely recovering has spiked in recent days.

While there is no doubt that the Chinese economy will suffer badly due to the slowdown of economic activity related to this virus, there is increasing optimism that this slowdown might be confined to the first quarter of 2020, thus abating somewhat the impact on both global production and corporate supply lines, impacts that markets had started to price in.

U.S. traders will have to note that this renewal in optimism only occurred after the S&P 500, our broadest large cap index had survived a scare (that would have forced increased risk off behavior) at it's 50 day simple moving average (SMA). Now, the Nasdaq Composite, which is indeed broad, but tech heavy, so less diversified than the S&P 500, really never came that close to a test at this line. The tech sector, while experiencing a sharp selloff across semi-conductor stocks (The Philly Semiconductor Index - SOX) actually spent two days below the 50 day SMA, had been buoyed by software stocks. Just take a look at these two charts for the purpose of visualization...

Stunning, is it not? This is also why I have long advocated a separation between these two large groups within the Information Technology sector as there little common ground beyond a commodity like reliance of one upon the other, in terms of market exposures, and also in geographically localized demand.

Hopefully. I have told readers once if I have told them a thousand times over the years. When it comes to "guestimating" national monthly performance across manufacturing, the Chicago PMI is among the least useful economic data-points in our arsenal. The "Philly Fed" and the Richmond Fed Manufacturing Index hold far more sway for me. Chicago has always been volatile, and as such, survey results have traditionally had little to do with what economists had projected. Richmond told you flat out that New Orders, Backlogged Orders, and Shipments were heating up in January.

That's not exactly what the Institute for Supply Management tried to tell you on a national level on Monday, but the ISM did tell us that in January, New Orders (the life blood of manufacturing) returned to expansion, as did production. Backlogged orders are still contracting, but at least the rate of that contraction is decelerating. Oh, and Export orders expanded, just as Chinese supply lines became less reliable. Hmm.

"Oil, that is. Black Gold." WTI Crude Oil futures settled at $50.11 a barrel on Monday. Down 2.8% for the day. Down 20.8% since trading at $63.27 as recently as January 6th. Incredible. That's what happens when the world's largest importer of oil cuts back on those imports by an estimated 3 million barrels per day as city after city is shut down.

Help on the way? Crude futures are trading off of their lows on Tuesday morning. (These futures are also trading off of their highs.) OPEC + (includes non-OPEC producers allied with the cartel) will hold technical meetings both today (Tuesday) and tomorrow (Wednesday) in Vienna. Does this meeting become something more than technical? Talk, and it is really just talk until we see hard news, is that the Russian side is becoming more comfortable with the idea off reducing current production levels by an aggregate 500K bpd, while the more aggressive Saudis may be pushing for an increase of as much as 1 million barrels per day.

My thought on this? Rumors... and potentially actions taken may give lift to underlying commodity prices, and even related equities that have been battered. There is no doubt that the forces of ESG style investment are in control and a lower valuation has been assigned to the group. If one intended to reduce exposure, rallies (if you see one) are when you implement that plan. Many traders get a little greedy when they see sporadic pops in under-performing positions, and forego the opportunity to work their way out of their losers. If one goes, my suggestion is to go incrementally.

If you're like me, you are in some of these names for the revenue. Replacing these yields will not be easy. BP PLC (BP) just posted a quarterly earnings beat. This remains my favorite oil long. Even if oil becomes the new tobacco (I'm chewing right now), I am in BP, as this is the one name where my net basis management skills have out-performed the aggression of those selling the sector. Besides, BP just increased their already gargantuan quarterly dividend. As for my other two remaining sector longs... Exxon Mobil (XOM) , and Royal Dutch Shell (RDS.A) , I do intend to incrementally reduce exposure. That said, if you are in this foxhole with me, remember... these guys owe us some money, so no itchy trigger fingers. Exxon Mobil is set to pay $0.87 per share to shareholders of record on February 11th, and Royal Dutch Shell will pay $0.94 to shareholders of record on February 13th. Old saying worth remembering gang... "Slow is smooth, smooth is fast" may just apply. Know what's always fast? Panic. Panic is always fast. Speaking of panic...

Tesla (TSLA) . Nuff said. The shares added an incredible 19.9% on Monday, and have traded even higher overnight. Where to even begin? I think it probably more than obvious that as more and more positive news concerning this firm (including earnings, and then the foolishness of trying to place target prices on the parabolic) has been transmitted to the marketplace, that a short squeeze has taken place, but not just any short squeeze. Would it really surprise in coming days to hear that a well known or large hedge fund (or two, or more) may have been forced to capitulate on this name in coming days?

The Financial Times reports that short sellers may have lost an aggregate $3.1 billion in this name on Monday. This, after losing an aggregate $5.8 billion for the month of January. Think losing 8% to 10% on an oil long is tough? I can not even imagine this. This sounds career-ending. Risk managers have certainly forced the hands of portfolio managers in recent days. What about smaller operations where the portfolio manager has the political clout to overrule the risk manager? How many of them are still out there, believing that recent moves are unsustainable? 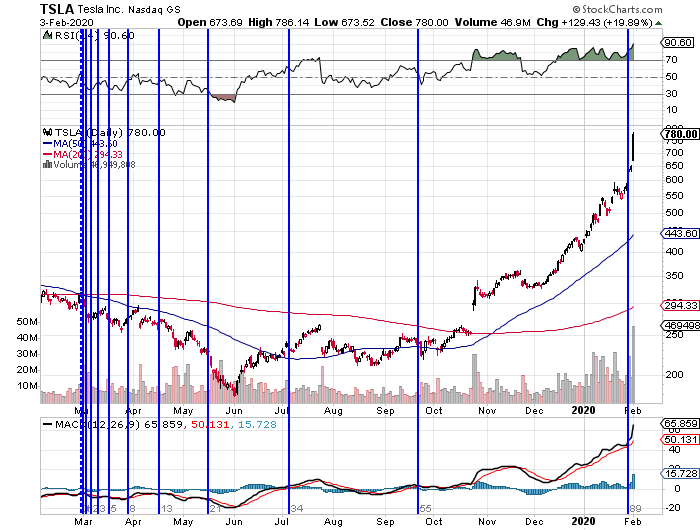 Almost as incredible is the application of a Fibonacci Time Zone model to a one year daily chart of Tesla. This model, in hindsight, almost perfectly times the now "mini selloff in September as well as Monday's ridiculousness. Now, add a Pitchfork model, and this massive break-out becomes so much clearer. 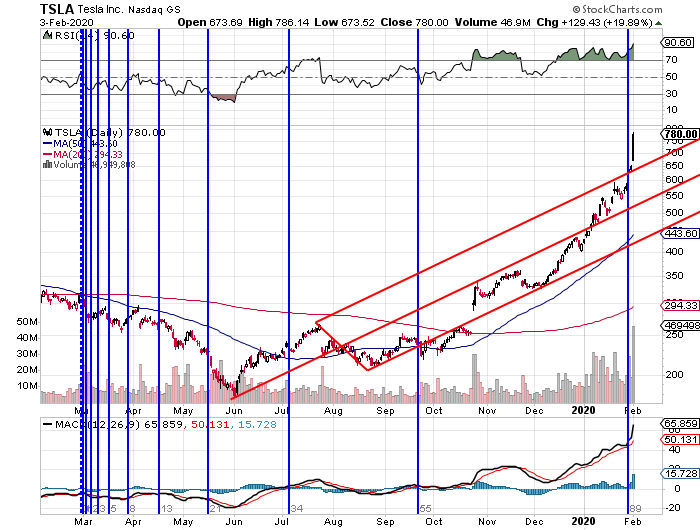 Should the panic buying finally draw down on this name, just where is support? Well, this is kind of like throwing darts. 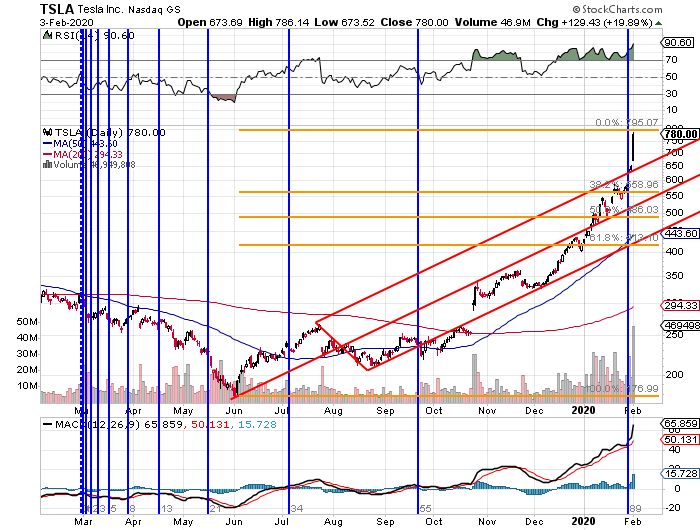 Our old pal Fibonacci tells us that when the air is let out of the balloon, the shares could see prices as low as $559, without really technically breaking. Then again, we may not have seen the top of this move. For those long the name, congratulations are in order. For those short, my condolences. For the rest of us, if we play, we are gambling. Nothing wrong with that, as long as one stays within one's tolerance for risk, but know the beast.

(BP, Clorox and Disney are holdings in Jim Cramer's Action Alerts PLUS member club. Want to be alerted before Jim Cramer buys or sells these stocks? Learn more now.)

Get an email alert each time I write an article for Real Money. Click the "+Follow" next to my byline to this article.
TAGS: Investing | Markets | Oil | Options | Stocks | Technical Analysis | Trading | Automotive | China

In a year full of boom and bust commodity moves, let's spill the beans on coffee's unruly rally.

It's Not a Full Rotation but Russell Has a Turn

Some traders hoped to see rebound in growth and small caps, which didn't quite work out, but still the IWM had a solid gain of 1.5%.

Jim Cramer: What a Day to Celebrate Not Being Short the Stocks I Like

I'm grateful for those who say that they like to short everything I like because crow is a dish best tasted cold, and are they ever eating a ton of it.

I don't want to own the stock outright nor would I want to be long anything under $220.