During Friday's Mad Money program, Jim Cramer noted that the consumer packaged goods stocks have been on fire recently, except for The Clorox Co. (CLX)  which is currently down for the year after the company slashed forecasts at its analyst meeting this past week. Is the stock a buy? Cramer said it is.

According to Cramer, this past week Clorox reset analysts' expectations and may now be in a position to under promise and over deliver. He said the company's management is smart, taking a financial hit now in order to invest in its brands and new innovations to help differentiate itself against growing private-label competition.

This is not the first time Clorox has had to reinvent itself, Cramer concluded, which is why he remained a believer in the company's management.

In this daily bar chart of CLX, below, we can see that prices have traded sideways the past 12 months but a closer look shows that things have weakened in the past two months. Prices are below the declining 50-day moving average line and the bearish 200-day line.

The On-Balance-Volume (OBV) has weakened since the middle of July and it is back to the lows of April. A declining OBV line tells us that sellers of a stock have been more aggressive and have gained the upper hand in the battle between bulls and bears.

In this weekly bar chart of CLX, below. we can see that prices are below the declining 40-week moving average line and that prices are at the bottom end of a $145-$ 167 trading range.

The weekly OBV line looks toppy and the MACD oscillator is close to crossing below the zero line for an outright sell signal.

In this Point and Figure chart of CLX, below, we can see that a trade at $143.60 is a new low for the recent move down and this could open the way for a bigger decline to the $128 area. 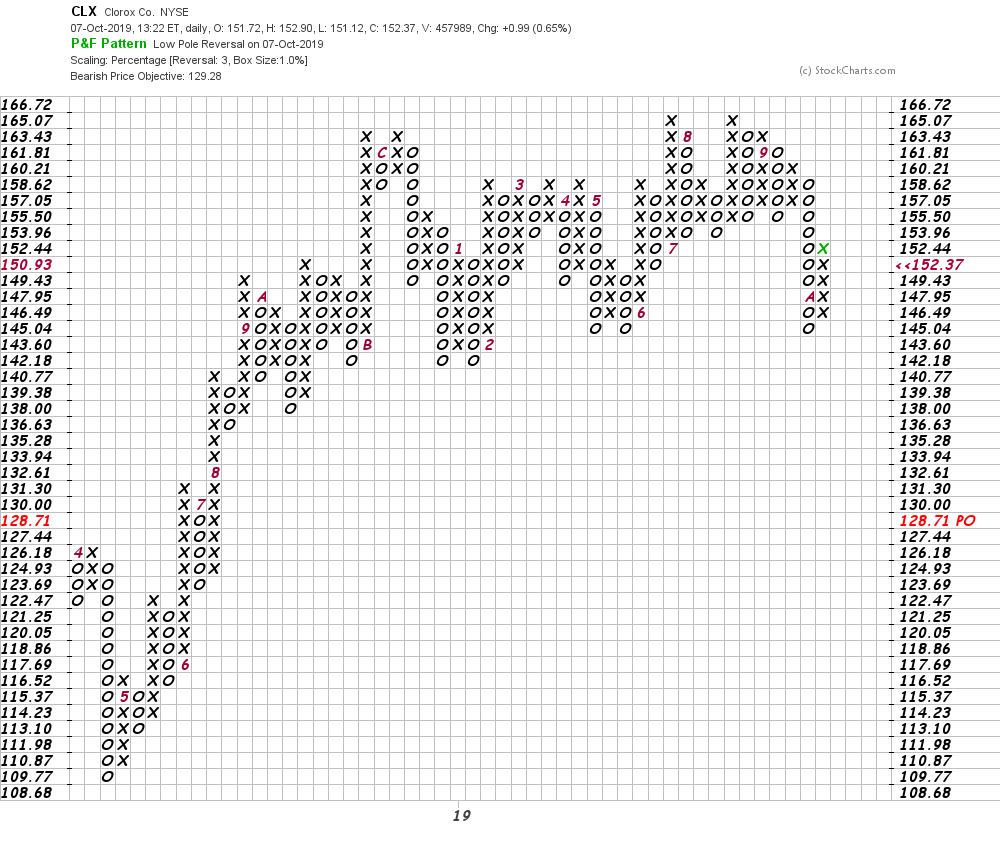 Bottom line strategy: After you separate the lights and darks you may find that you need less and less CLX to do the laundry. The charts looks that way too - I want to hold less in a portfolio and we should be able to buy it at lower levels in the months ahead.

Get an email alert each time I write an article for Real Money. Click the "+Follow" next to my byline to this article.
TAGS: Investing | Stocks | Technical Analysis | Trading | Mad Money | Consumer Products | Consumer Discretionary | Earnings Preview

We Don't Have a Magic Bullet for the Market, but We Have This

We have a point when we know the runway is short unless we get a pullback. Let me explain.