Zelnick explained that TTWO reserves its cash for three purposes - to fund organic growth, for acquisitions and to return capital to shareholders when it sees value in its shares. The company has been seeing a lot of value, he said, which is why it has spent $360 million on share buybacks.

When asked about the business, Zelnick said there is a lot of good news as the industry moves towards interactive entertainment that looks likes live-action movies. He said other trends, like free-to-play titles, are also exciting as they bring new gamers into the market. Advances in streaming technologies allows gamers to play without investing in expensive consoles. There are now over 250 million people watching eSports, and good things continue to happen in the eSports world. Let's check out the charts and indicators.

In this daily bar chart of TTWO, below, we can see that prices suffered a steep decline from early October to the end of February with prices slipping from $140 to around $85. Prices have rebounded to around $110 but so far it looks like a rally failure at the underside of the declining 200-day moving average line. Prices are above the rising 50-day line but that might be retested in the days ahead.

The daily On-Balance-Volume (OBV) line declined from early October to the middle of March as sellers were more aggressive.The OBV line has come off its lows but its rise is not particularly strong.

The Moving Average Convergence Divergence (MACD) oscillator is above the zero line but poised for a bearish crossover.

In this weekly bar chart of TTWO, below, we can see what is potentially a large top formation - maybe a head and shoulders top with the right shoulder being formed now with a rally to the underside of the declining 40-week moving average line.

The weekly OBV line has been weakening since early 2018 and the MACD oscillator only managed a cover shorts buy signal in April.

In this Point and Figure chart of TTWO, below, we can see an upside price target of $130 but a decline to $99 will turn this chart bearish. 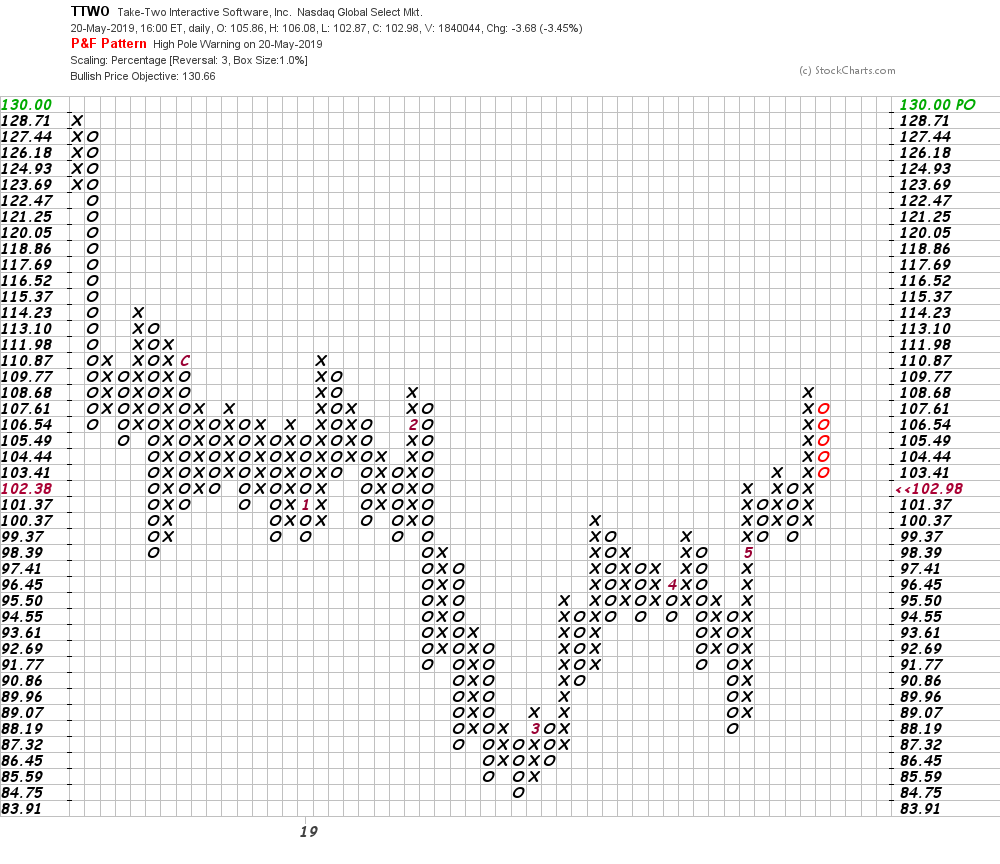 Bottom line strategy: Unless TTWO rallies to close above $110 it looks like prices could drift lower in the weeks ahead.

Get an email alert each time I write an article for Real Money. Click the "+Follow" next to my byline to this article.
TAGS: Investing | Stocks | Technical Analysis | Trading | Gaming | Mad Money | Executive Interview | eSports