In Friday night's Lightning Round with Jim Cramer responding to callers during his Mad Money program, he said this about two gamers - "Activision Blizzard (ATVI) : "I think you want to be in Take-Two Interactive Software (TTWO) ." Let's check out the charts of TTWO this morning.

In this daily bar chart of TTWO, below, we can see that prices made a low in February and a retest can be seen in April. Prices turned higher from late April, closing above the rising 50-day moving average line.

This month TTWO closed above the 200-day moving average line but its slope is still bearish. The daily On-Balance-Volume (OBV) line shows a low and bottom in late February and early March. The rising OBV line signals that buyers of TTWO have been more aggressive.

The trend-following Moving Average Convergence Divergence (MACD) turned up above the zero line in early May for an outright go long signal and could turn higher again in the days ahead.

In this weekly bar chart of TTWO, below, we see these scenarios - we could be looking at a large top formation or we may be looking at a very bullish consolidation pattern.

TTWO could be making a "right shoulder" of a large head and shoulders top pattern. The 40-week moving average line peaked in early 2019 and is pointed down. Prices have rallied above the 40-week line but they have not challenged what I would consider overhead resistance beginning around $120.

Looking at the weekly OBV line we see the highest point is back in late 2017 and early 2018 where the "left shoulder" formed. The "head" of the pattern shows a lower OBV line and still lower for the "right shoulder".

The buy signal from the MACD oscillator does not fit with the pattern but it would fit with a large consolidation pattern. Price strength above $140 would nix the top pattern and open the way for an important upside breakout.

In this Point and Figure chart of TTWO, below, we can see that a trade at $114.23 will be a bullish breakout and open the way for a $131 price objective. 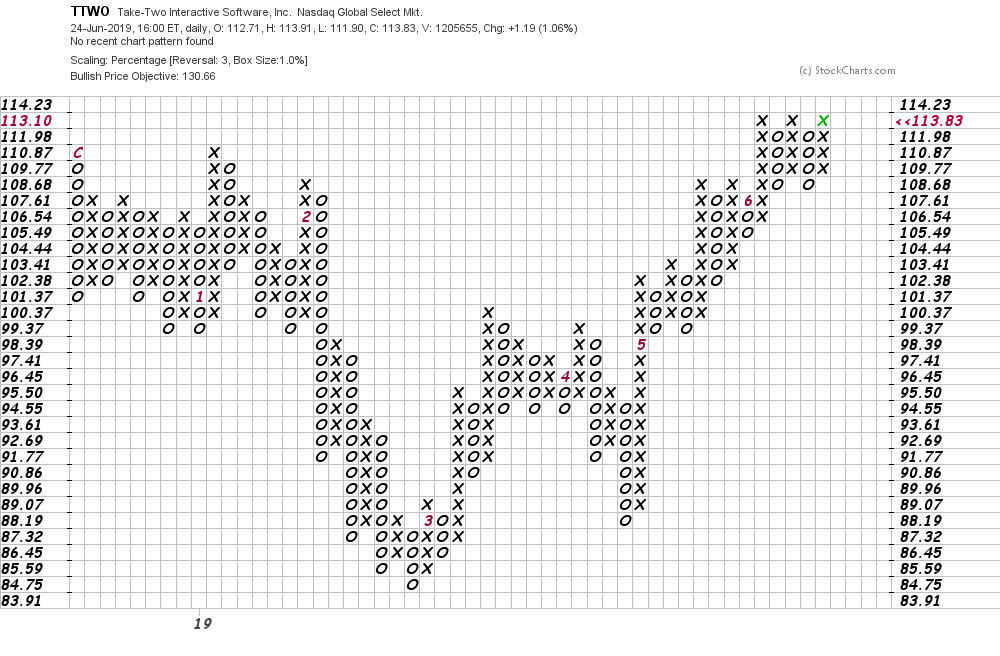 Bottom line strategy: With the chart of ATVI, below, going sideways, TTWO is more attractive. Traders could consider buying strength above $114.23 risking to $107 looking for gains to around $130.

Get an email alert each time I write an article for Real Money. Click the "+Follow" next to my byline to this article.
TAGS: Investing | Stocks | Technical Analysis | Trading | Digital Entertainment | Mad Money

Get Ready to Test, and Retest, Your Patience

Why should we see a retest a week or two later this time around, when we haven't any of the other times in history?

As crisis turns into one of mental health as well as physical health, some firms are experimenting with use of LSD and 'magic mushroom' compounds.

Amid the Crisis, Listen to Price for Guidance

It is extremely important to stay focused on price action rather than letting personal desires drive decisions.