Zelnick said that interactive entertainment is now the No. 1 entertainment vertical, ahead of all other activities. However, the company is realistic and expects demand to moderate as people begin to leave their homes again.

Take-Two is a highly efficient company, Zelnick added, and the 700 new developers they added last year were needed to meet their goals of delivering 60 new titles in the next few years.

When asked about some of their existing titles, Zelnick said that Grand Theft Auto continues to set new records for online play and NBA2K had another great year as we're still in the early days of eSports.

Finally, Zelnick said that Take-Two is meeting consumers where they are, whether that's buying physical media or downloading games online.

We looked at TTWO last on February 10 and wrote that "Momentum tends to peak before prices do so it is a leading indicator. It is not a precise timing tool but more of a "get ready and watch things closer" tool. TTWO is showing a weakening momentum picture with the risk of a temporary pullback. Stay nimble."

Let's check on things now. In this daily Japanese candlestick chart of TTWO, below, from www.stockcharts.com, we can see that the price of TTWO tumbled lower after our February 10 review. Prices made lows in March and May and this suggests a fresh bottom has been made. Prices have recently rallied and closed above the 50-day moving average line and the 200-day moving average line.

The On-Balance-Volume (OBV) line has been in a decline from February and its trend tells us that sellers of TTWO have been more aggressive. The trend-following Moving Average Convergence Divergence (MACD) oscillator has just turned upwards for a cover shorts buy signal. 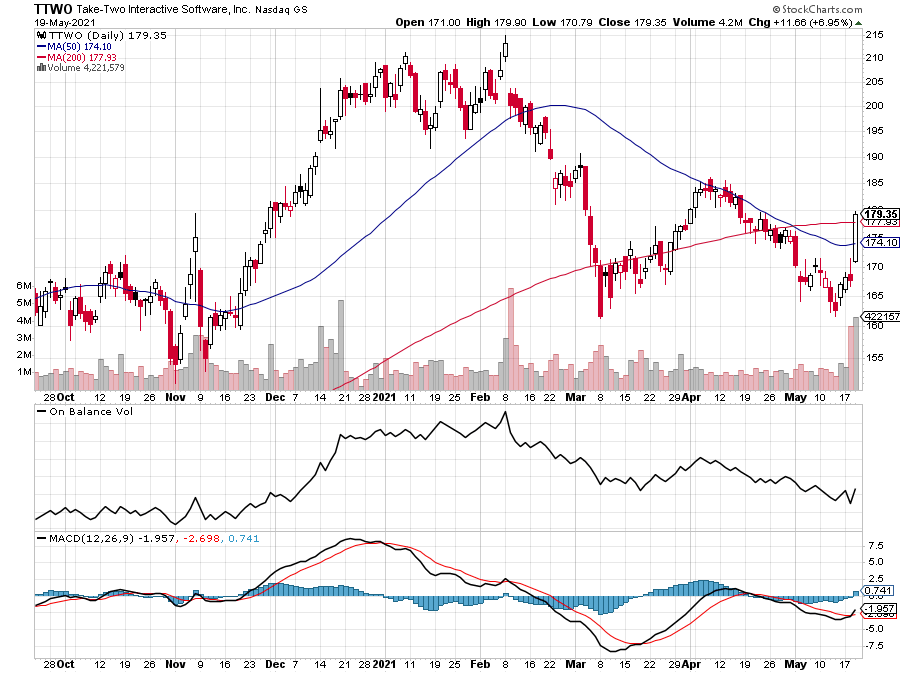 In this weekly Japanese candlestick chart of TTWO, below, we see a mixed to bearish picture. Prices are at the underside of the cresting 40-week moving average line. The weekly OBV line has been in a decline since January and the MACD oscillator is testing the zero line but it has begun to narrow. On the plus side we can see some lower shadows near $160 in March and May as traders rejected the lows. 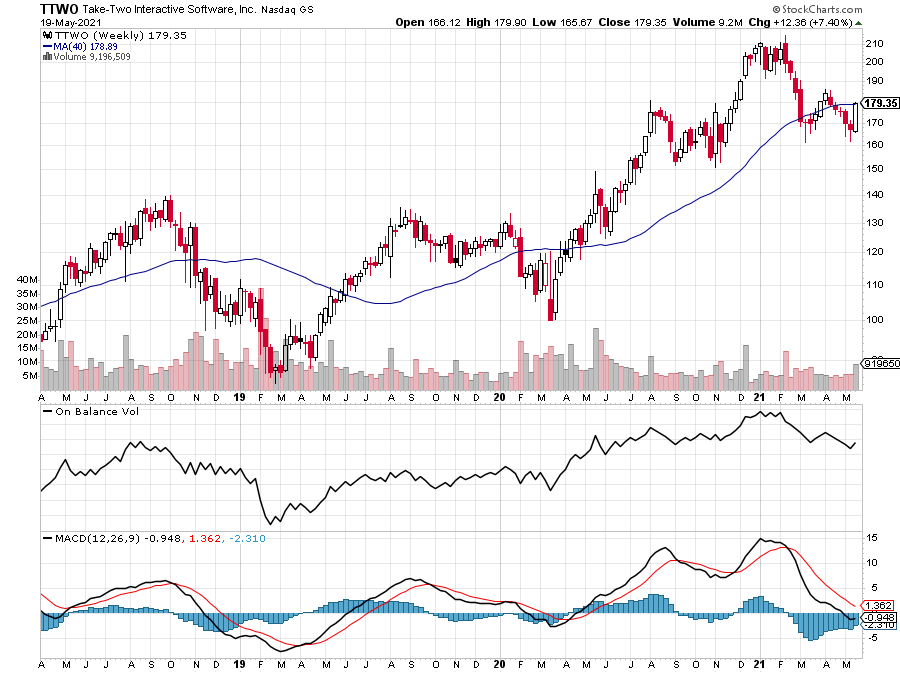 In this daily Point and Figure chart of TTWO, below, we can see that the software is now projecting a potential upside price target in the $213 area. A trade at $187.86 is needed for a fresh upside breakout. 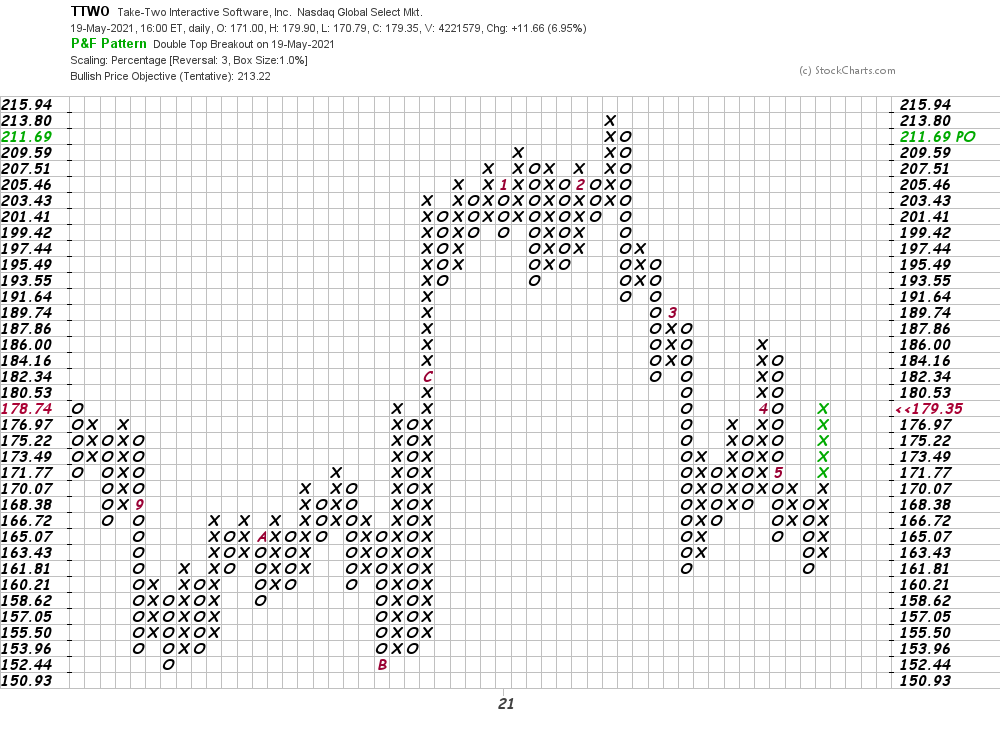 In this first weekly Point and Figure chart of TTWO, below, we can see a bearish downside price target in the $109 area. 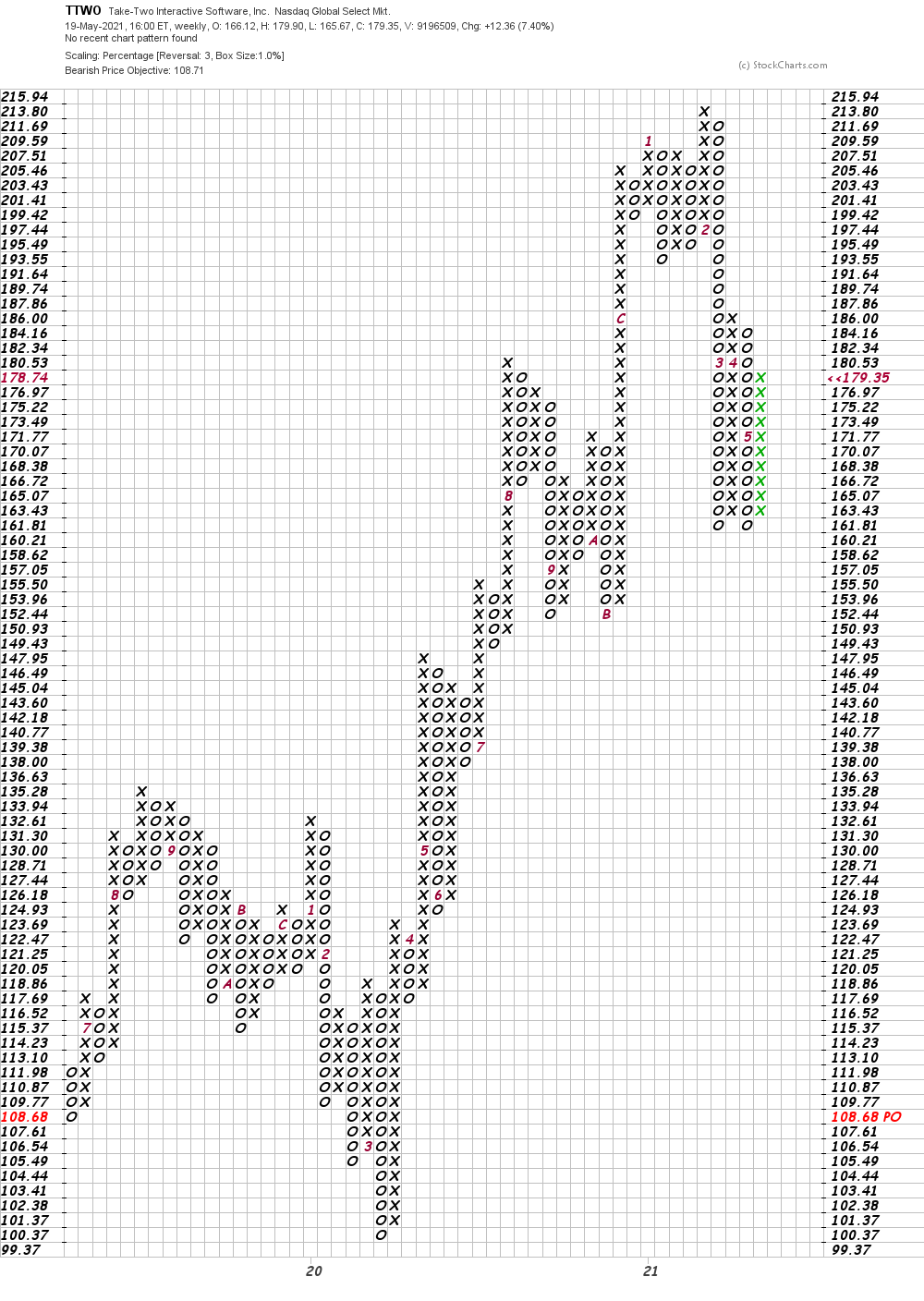 In this second weekly Point and Figure chart of TTWO, below, we used close only price data and a traditional even dollar scaling. Here the software gives us a $151 price target. Not as bearish as $109.

Bottom line strategy: The charts and indicators of TTWO can be presented as bullish or as bearish (not an unusual story with technical analysis). The daily charts show improvement but the weekly charts are not out of the woods. Let's give things a few more days to see if the bulls are truly back in the game.

Get an email alert each time I write an article for Real Money. Click the "+Follow" next to my byline to this article.
TAGS: Earnings | Investing | Stocks | Technical Analysis | Trading | Software & Services | Gaming | Mad Money | Executive Interview | eSports