Take-Two Interactive Software  (TTWO) , Jim Cramer's favorite game maker, is due to report earnings on Thursday. Are the charts pointing down or up?

In this daily bar chart of TTWO, below, we can see that prices made a peak in August and have worked lower into November. Prices steadied in early October and managed a rebound, but stopped/failed at the underside of the declining 50-day moving average line. TTWO has made a new low for the move down, so the next nearby price target is likely to be the $115 or the $110 area.
The daily On-Balance-Volume (OBV) line has been drifting lower since late July and suggests that sellers of TTWO have been more aggressive. The 12-day price momentum study shows that the decline has slowed in November and that can sometimes foreshadow a bounce, rebound, or price increase in the near term.

In this weekly bar chart of TTWO, below, we can see a large potential top formation that has been unfolding since early 2018. Prices are above the cresting 40-week moving average line. The weekly OBV line shows a peak in early 2018 and a slow erosion lower. This weakness in the OBV line supports the idea of a major top formation. The Moving Average Convergence Divergence (MACD) crossed to the downside in late September for a take profits sell signal or a sell signal in an uptrend.

In this Point and Figure chart of TTWO, below, we can see a potential upside price target of $143, but a trade at $116.52 will be a new low for the move down and will likely precipitate further declines. 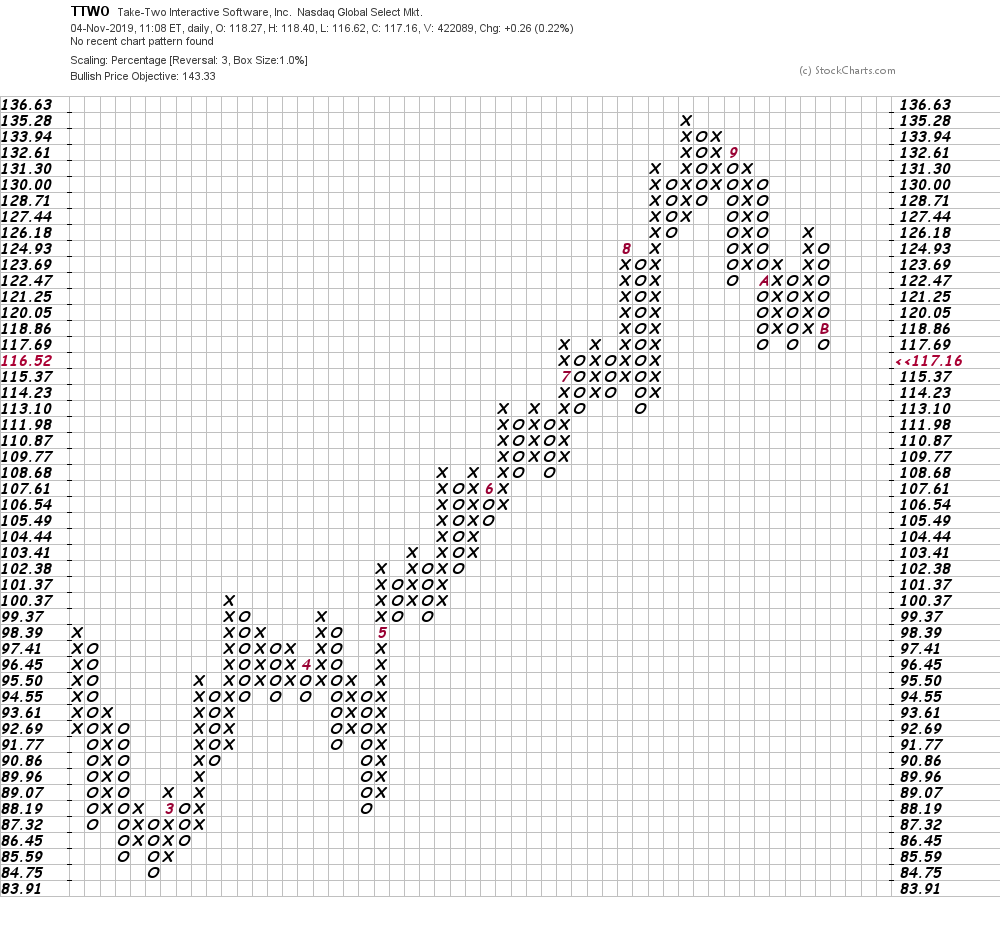 Bottom line strategy: The charts and indicators on TTWO suggest that traders and investors have positioned themselves for a weak earnings report. Avoid the long side for now.
Get an email alert each time I write an article for Real Money. Click the "+Follow" next to my byline to this article.
TAGS: Investing | Technical Analysis | Gaming | Mad Money | Earnings Preview