Flavor Boosting champ McCormick (MKC) released the firm's fiscal first quarter financial results on Tuesday morning. The firm posted adjusted EPS of $0.63 on revenue of $1.52B. Both of these numbers slightly exceeded Wall Street's expectations, while the sales total was good for year over year growth of 2.8%, which includes a 1% unfavorable impact from currency exchange rates.

While sales have held their level well versus the pre-pandemic level, inflation has taken a bit out of performance as gross profit margin decreased by 220 basis points. Operating income dropped to $207M from $236M for the year ago period. The above mentioned adjusted EPS of $0.63 compares to $0.72 last year.

Sales declined 2% to $926.1M. 2% sales growth in the Americas were offset by declines in EMEA (Europe, Middle East, and Africa) and Asia/Pacific regions.

As of February 28th, McCormick had a net cash position of $338.4M and inventories of $1.244.2B on the books. Current assets of $2.239B were up small from $2.195.8B three months ago. Current liabilities of $3.076.7B might be down significantly from November, but a current ratio of 0.73 still makes me uncomfortable. Total assets of $12.940.8B still easily outweigh total liabilities less equity of $8.326.6B. Long-term debt amounts to $3.964.7B, while short-term borrowings (which are current liabilities) add up to $1.407.5B. In short, even excluding accounts payable, this firm owes $5.372.2B, with the above mentioned $338.4M in cash on hand. Needless to say, as far as the Sarge test is concerned... This balance sheet falls well short of even sniffing a passing grade.

For fiscal year 2022... McCormick did reiterate the firm's financial outlook for sales, operating income and earnings per share. The company expects to grow sales by 3% to 5% versus the 3.8% that Wall Street was looking for. The firm also sees adjusted EPS for the year at $3.17 to $3.22. Wall Street was at $3.18 on this metric. These are general positives.

I have only seen one sell-side analyst react to this release. Jefferies three star rated (by TipRanks) analyst Robert Dickerson maintained a "hold" rating with a $100 target price. I have not seen a note attached. Not exactly a rousing endorsement.

I love the products. I am a good customer. It makes the stuff I cook not taste awful. I have/had a positive perception whereas this company is concerned. While I find it likely that folks like me, who have been cooking at home who do not have a strong background in doing so, will eventually do so less often as the pandemic (hopefully) becomes something we worry about less as time moves on. That said, this is a positive for McCormick's restaurant and food service businesses.

That balance sheet, though? Hard to ignore. I will not be venturing forward with a position in this name, nor will I be endorsing one for the readers. That said, some of you probably already have one. 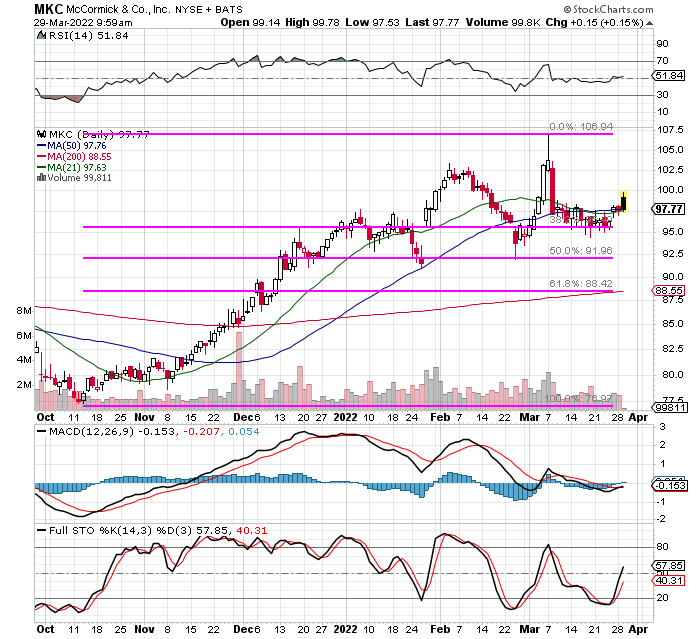 The shares do seem to have found at least closing (as opposed to intraday) support at the 38.2% Fibonacci retracement level of the October through early March rally. All three of my main indicators, Relative Strength, the daily MACD, and the Full Stochastics Oscillator really don't render much of an opinion. I think MKC is farming a base of consolidation between probably $103 (as $107 was really the result of a one-day spike) and $95-ish.

A trader looking to get long these shares could do so while selling the April 14th MKC $100 calls against the position in order to knock a dollar off of the net basis. Another trader looking to get paid to take on equity risk at a discount could sell April 14th $95 puts for a little more than $1 this morning, and if ultimately tagged, hold the shares at a net basis below $94 with the shares trading somewhere below $95.

Get an email alert each time I write an article for Real Money. Click the "+Follow" next to my byline to this article.
TAGS: Earnings | Investing | Stocks | Technical Analysis | Trading | Consumer Staples