During Friday's Mad Money program, Jim Cramer looked at the week ahead and zeroed in on a few stocks that were on his radar. Today we are due to get earnings from chip maker Micron Technologies (MU) after the close. Cramer told viewers that Micron remains a controversial stock. Let's check out the charts.

The On-Balance-Volume (OBV) line shows a bullish rise from March to early August and then a softer/weaker pattern into September. The Moving Average Convergence Divergence (MACD) oscillator has been moving around the zero line since May and tells us there is little "trend strength".

In this weekly bar chart of MU, below, we can see that prices have moved sideways this year in a large potential triangle pattern. Prices have traded around the 40-week moving average line which now has a negative or bearish slope.
The weekly OBV line has been moving sideways since February and tells us that buyers and sellers seem to be balanced. The MACD oscillator has been hugging the zero line.

In this daily Point and Figure chart of MU, below, we can see only the filtered price data and we ignore volume and time. The price movement is being interpreted by the software as bearish with a potential downside price target. 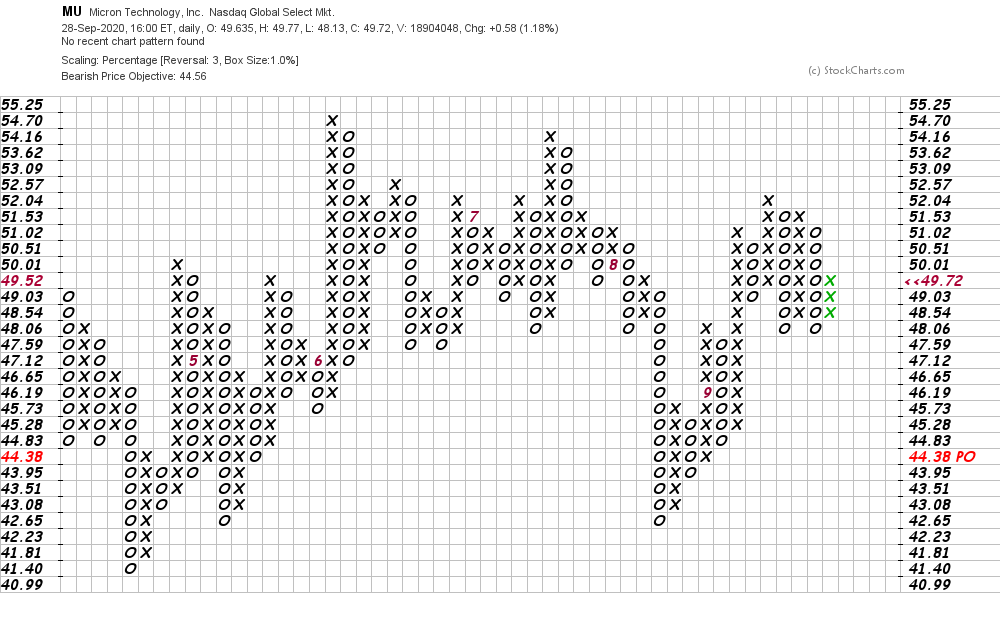 Bottom line strategy: The charts of MU suggest the risk of a downside move. I have no special knowledge of what MU is going to report, but with earnings expected after the close tonight traders should take a cautious stand for now in my opinion.
Get an email alert each time I write an article for Real Money. Click the "+Follow" next to my byline to this article.
TAGS: Investing | Stocks | Technical Analysis | Trading | Semiconductors & Semiconductor Equipment | Mad Money | Earnings Preview

MAT is losing trend strength and need some sideways action to renew the trend. Hold longs and keep your sell stop in place.