One day ahead of the unofficial kickoff of fourth quarter earnings season with a bevy of large banks reporting, one major corporation released their Q4 numbers in near isolation. Taiwan Semiconductor (TSM) , foundry to the world, posted their performance on Thursday morning.

For the three month period ended December 31st, Taiwan Semiconductor posted GAAP EPADR of $1.82 versus expectations for about $1.77. The firm reported revenue generation of NT625.53B,  the US equivalent of $19.93B. This number fell short of both guidance and expectations despite being good for year over year growth of 26.6%.

Gross margin for the period was 62.2%, while operating margin was 52% and net profit margin landed at 47.3%. Technologically advanced chips, defined as chips of 7nm or less, accounted for 54% of wafer driven revenue. 5nm chips comprised 32% of total wafer revenue while 7nm chips made up 22%. The firm did note that demand for data center chips has softened while demand for chips for smartphones and consumer electronics has been outright weak.

By platform, high performance chips still account for 42% of chips sold, while smartphones account for 38%. IoT (Internet of Things) is a distant third at 8%.

For the current quarter, Taiwan Semi expects to drive revenue of $16.7B to $17.5B. Never mind the midpoint. This entire range is below the $17.65B that Wall Street was looking for. At the midpoint however, this would amount roughly to a 14% sequential decrease but a 16% annual increase. Based on an exchange rate of 30.7 NT (New Taiwan Dollars) to one US dollar, the firm expects to produce a gross profit margin of 53.5% to 55.5% and an operating profit margin of 41.5% to 43.5%.

Total assets are worth $161.651B. This includes no intangible assets, which we admire. Total liabilities less equity comes to $65.259B including $27.166B in long-term debt, which the firm could pay off out of pocket. This balance sheet is golden.

This is not a great report. Then again, it's far from awful. I think these numbers are probably better than feared. The guidance mentioned above is more optimistic than the CFO sounds.

In the release, Taiwan Semi CFO Wendell Huang commented, "Our fourth quarter business was dampened by end-market softness, and customers' inventory adjustment, despite the continued ramp-up for our industry-leading 5 nanometer technologies. Moving into first quarter 2023, as overall macroeconomic conditions remain weak, we expect our business to be further impacted by continued end-market softness, and customers' further inventory adjustment."

Huang gives me some reason for pause. 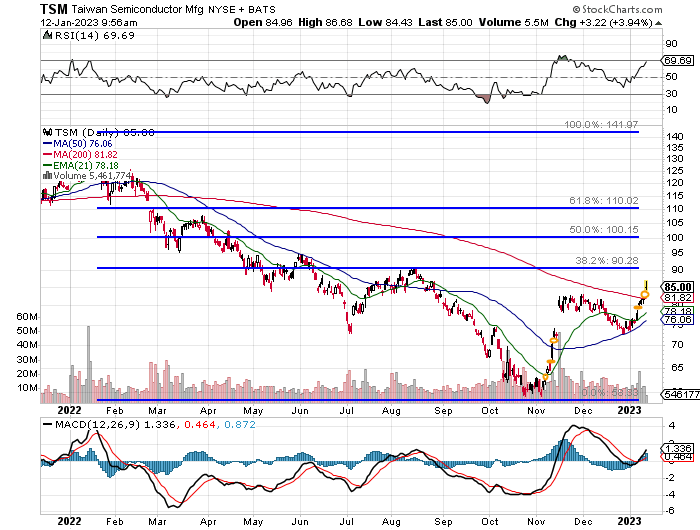 I will not be quick to jump on board TSM on this morning's pop. While the shares have retaken their 200 day SMA (simple moving average) this morning, they are also sneaking up on a 38.2% retracement level of the January 2021 through November 2022 selloff with relative strength nearly reading as being technically overbought. Though the daily Moving Average Convergence Divergence (MACD) does appear to be in good shape. 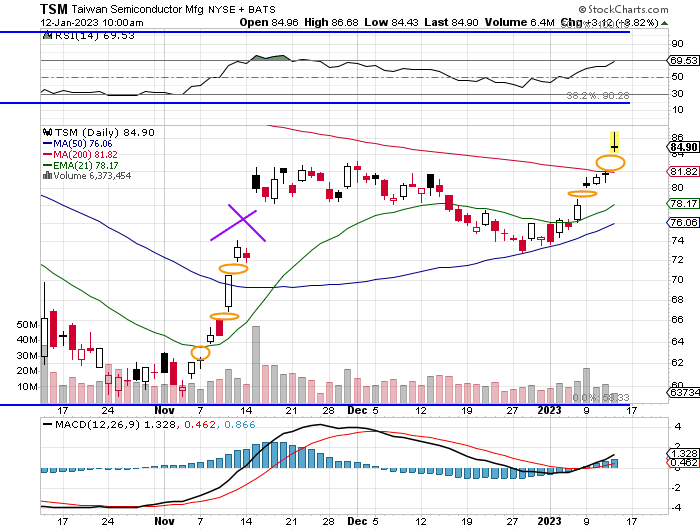 All that said, TSM has left a number of unfilled gaps in its wake as it has climbed off of the early November bottom. Though the mid-November gap that I drew up that purple X for has filled, I see five others that may have to fill. That's some accumulated gravitational pull there.

I'll tell you what. I need to see these shares test that 200 day line and find institutional support there. Then, I would feel better about jumping in. The stock traded at just 12 times forward looking earnings, yields 2.22% and is as fundamentally sound as any business out there. I just need to see the shares pass that test.

Get an email alert each time I write an article for Real Money. Click the "+Follow" next to my byline to this article.
TAGS: Earnings | Economy | Investing | Markets | Stocks | Technical Analysis | Trading | Semiconductors & Semiconductor Equipment | Technology