Perhaps more telling for market participants on Thursday morning than the release of large money center bank earnings, was the earnings release of the world's largest semiconductor chip foundry.

Sure, JP Morgan (JPM) missed on both the top and bottom lines, as well as many internal line items. Sure, JP Morgan suspended the firm's share repurchase program, but Taiwan Semiconductor (TSM) managed in this environment to outperform expectations... after South Korea's Samsung had recently breathed a bit of life back into that group. Hmmm.

Very early this morning, in the US, Taiwan Semiconductor posted EPS of NT$9.14 on revenue of NT$534.141B (+43.5%). Both top and bottom line performance beat expectations. Converted into US currency, TSM posted EPS (ADR) of $1.55, which beat Wall Street by a nickel and revenue of $18.16B. The sales number was good for annual growth of 36.6% and also surpassed consensus view.

- The firm also sees operating profit margin between 47% and 49%.

There is more though. CEO C.C. Wei warned that it was too early to get specific, but the outlook for demand moving forward should delay customer orders in 2023. With that, Wei adds that 2023 should still be "a growth year."

Taiwan Semi plans to delay some capital spending. CapEx should come in at the lower bound of the previously offered range of $40B to $44B. The firm does not opine on how much of any cuts to spending might make it into next year.

Total assets add up to $146.22B. I do not see any intangible assets on their books, though one would think that there is certainly some intangible value here. Commendable. Total liabilities less equity comes to $61.755, including $25.365B in bonds payable. The bonds payable combined with the short-term debt still falls well short of the firm's cash position. This balance sheet is in pristine condition.

Taiwan Semi is trading higher on this release. Why not? The firm had a strong quarter and offered an outlook that included above consensus sales, but warned mildly on capital expenditures. We all know that inventories are elevated across the industry. I for one, expected a warning of some kind and thought it might be a lot worse.

Most of the semis are down this morning, with the exception of TSM and Advanced Micro Devices (AMD) , which is a TSM customer. AMD was also upgraded by Ambrish srivAstAvA, a five star (rated at TipRanks) BMO Capital analyst from "Market Perform" to "Outperform", while taking his target price from $100 to $115.

I think the comments around these earnings have to be seen as a positive for the industry, with perhaps an exception for memory chip makers such as Micron (MU) and Western Digital (WDC) as we expect market prices for both DRAM and NAND chips to be pressured this year into next. 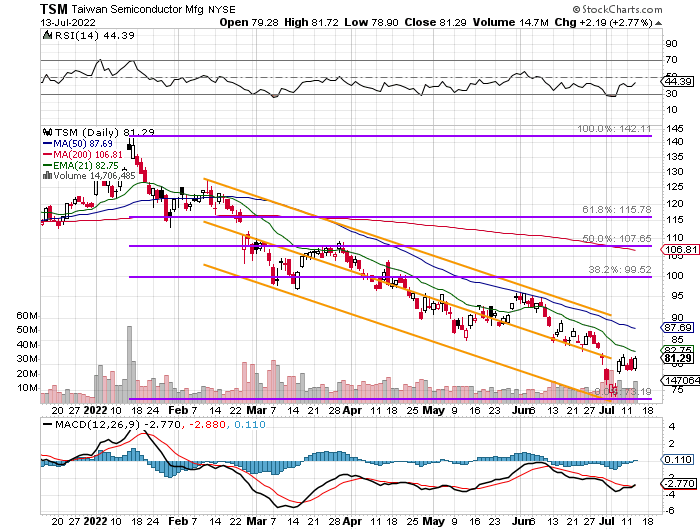 TSM remains firmly entrenched in a downtrend until it does not. The key today will be to try to hold the 21 day EMA after opening above that line. This could bring some of the swing trades on board and allow a run at the 50 day SMA ($87.59). That would be the pivot in any turnaround.

I am already long the chip names that I want to be long, but this is a worthy name with a strong balance sheet. They are also building in Texas, which will matter if Congress ever gets their heads out of their armpits.

Give the industry weakness this morning, if I wanted to get long TSM, I would rather go out and sell (write) an October $75 put for about $3.70 than buy 100 shares on strength this morning. Get paid to wait for your pitch.

(AMD is a holding in the Action Alerts PLUS member club. Want to be alerted before AAP buys or sells this stock? Learn more now.)

Get an email alert each time I write an article for Real Money. Click the "+Follow" next to my byline to this article.
TAGS: Earnings | Economy | Investing | Stocks | Technical Analysis | Trading | Semiconductors & Semiconductor Equipment | Technology

If You're Going to Play the Bounce Game, Just Remember You're Fighting the Fed

Buying into the decline is OK, but make sure you know where your stop is before you punch the key.

When Everyone Is Looking for a Bounce, It Isn't Likely to Last Long

The problem is that a large number of folks are looking to escape the bear market's pain and misery by selling into strength.

The leader of the Macau government says the city will welcome tour groups from mainland China for the first time in almost three years. It's part of the pattern of easing travel in East Asia.

Rising Rates: A Break of a 40-Year Trend Should Not Be Ignored

With 10-Year Treasury yields, it isn't where it's been, it's where it's headed.

Seems Like We Are Getting Close to a Rally

When equity folks are fretting more about interest rates and currencies than stocks, you know they are concerned.