Thinking about... Taiwan Semiconductor (TSM) . Taiwan Semiconductor reports Q2 financial performance in two weeks, on July 16th. Currently, Wall Street is looking for EPS of $0.93, without much divergence in opinion. This name is not as highly followed across the community of analysts. I can only find four analysts that have gone as far as to make quarterly projections, six that have made annual projections, and just two that have really stuck their necks out and stated a price target at any point in the past six months.

The range of EPS expectations for Q2 EPS for TSM, across those four analysts is just $0.91 to $0.95. Wall Street is looking for approximately $13.2 billion in revenue generation for the quarter, which would be year over year sales growth of about 27%. This would be an acceleration in sales growth for a second consecutive quarter.

It was Tuesday. DigiTimes reports that Taiwan Semiconductor is expected to record record revenues for June, due to shipments of iPhones showing up in the data. Apparently, reduced purchases by client Bitmain, as China bans Bitcoin mining had not taken the toll on TSM sales as some had expected. Demand for 5nm and 7nm processors had offset the loss of that mining business as the firm shipped chips for Apple's (AAPL) smartphones in time to appear in June's numbers. The expectation is that the firm stays on course for 20% sales growth for the fiscal year, and that June could be flat from May (which is a good thing).

Early this (Friday) morning, news broke that Apple and Intel (INTC) will be the first customers to test TSM's 3nm production technology, which if all goes well, deploys toward the back half of 2022. Nikkei Asia reports that Intel is planning at least two projects to design CPUs for notebooks and data centers around the new 3nm chips.

Just a quick tutorial. TSM's 5nm chips are the most advanced chips available and if you have an iPhone 12, you have one of these chips. TSM is indicating that the new 3nm chips will offer a 10% to 15% boost to computing performance compared to the current 5nm product, while also reducing power consumption by 25% to 30%.

As an aside, Intel announced the delay of the Sapphire Rapids data center processor earlier this week. While this is seen around Wall Street as yet another chance for Advanced Micro Devices (AMD) , and even Nvidia (NVDA) , to tackle even more market share away from the lumbering giant, but also makes at least this investor wonder just how Intel thinks they are going to get to a point anytime soon where they can compete with the likes of Taiwan Semiconductor as a global foundry to other chip designers.

Of those few analysts that I mentioned who actually cover the name, only one reacted to this news. Susquehanna's five star (rated at TipRanks) analyst Mehdi Hosseini upgraded the name from "Negative" to "Neutral", while upping his target price from $85 to $105. The only other analyst with a recent target price is Jim Kelleher of Argus Research (also five stars). Kelleher initiated the name a week earlier as a "Buy" with a $150 target. 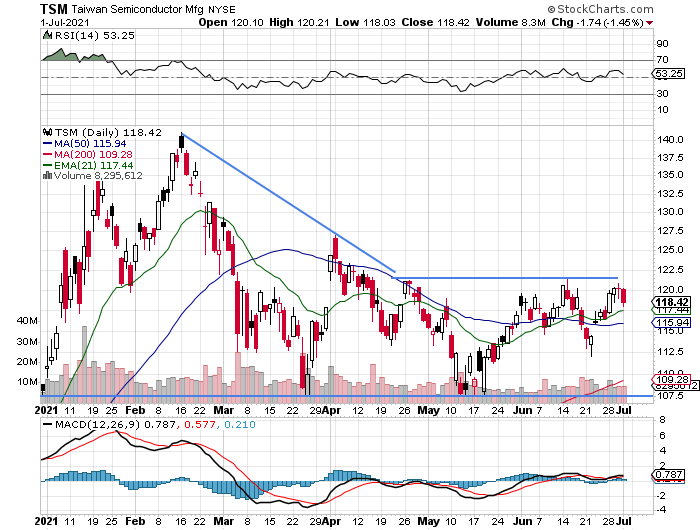 Readers will see that in late April, these shares managed to turn a descending triangle (which is a bearish pattern) into a flat basing pattern without ever allowing the triangle to close. Since bottoming, TSM has retaken both the 21 day EMA and the 50 day SMA, using the former as support on weakness just yesterday.

Regular followers well know that I have been hot for the semis for a good while now, in spite of, or rather because of the widely covered shortages that are creating significant pricing power.

I am already long AMD, and Marvell Technology (MRVL) , both of whom have been solid investments. I am long Micron (MU) , which looked good until this week. I am long Nvidia which has simply been epic.

I am also long semiconductor equipment names... Applied Materials (AMAT) , and Brooks Automation (BRKS) , two names that have been good, and meh, respectively. I probably have room for a large foundry that will probably make short work of Intel (my opinion) once Intel tries to move in on their business.

I think TSM is ripe for entry, perhaps to the tune of 1/8 of intended position size. I would expect to add a second tranche of 1/8 at either a test of the 21 day EMA or a retaking of the $122 level, which is our pivot. Our target price upon taking that pivot will be $144, while for now (after purchasing these shares), I will go with a panic point of $110 (8% discount to initial entry).

(AAPL, AMD, NVDA and MRVL are holdings in Jim Cramer's Action Alerts PLUS member club. Want to be alerted before Jim Cramer buys or sells these stocks? Learn more now.)

Get an email alert each time I write an article for Real Money. Click the "+Follow" next to my byline to this article.
TAGS: Investing | Markets | Stocks | Technical Analysis | Trading | Semiconductors & Semiconductor Equipment | Technology | Asia