"According to industry sources."

This phrase has to be one of the most influential stock-moving phrases we see in the market today.

Today, it's moving Taiwan Semiconductor  (TSM) . Granted, the stock was only up 1.5% by midday Wednesday, but when your market cap is over $200 billion, we're still talking about $3 billion in market cap gains.

The stock is pushing higher because "according to industry sources", TSM is ramping up its 7-nanometer production rates and the company expects its manufacturing plant to be at full capacity by the third quarter. TSM draws nearly half its business from smartphones, so the thesis here is the company is seeing renewed strength for Android devices. Based on all the news we've seen from Apple (AAPL) recently, I think it is safe to say the demand isn't coming from there. In fact, based on TSM's recent disappointing performance, it is believed that Apple may have asked the company to shelve/hold onto inventory.

I wouldn't be buying TSM based on this thesis. That doesn't mean I wouldn't buy TSM, but I wouldn't buy it on smartphone demand. I would actually be more excited about the optimism around AMD. AMD is a 7nm client, so bullish business news for AMD could translate well to TSM.

TSM's platform with the 7nm is used to create SoC (System-on-a-Chip), the basic ingredients upon which chips are built. The upside growth really depends on the adoption of this into new CPUs, GPUs, AI, HPCs, and server chips. Even more is 5nm and when it will become more mainstream. TSM likes to talk about 5G, but as much as I'm attracted to the technology, I'm not sure its going to spur a huge wave of smartphone sales and upgrades in the near-term that will benefit TSM. 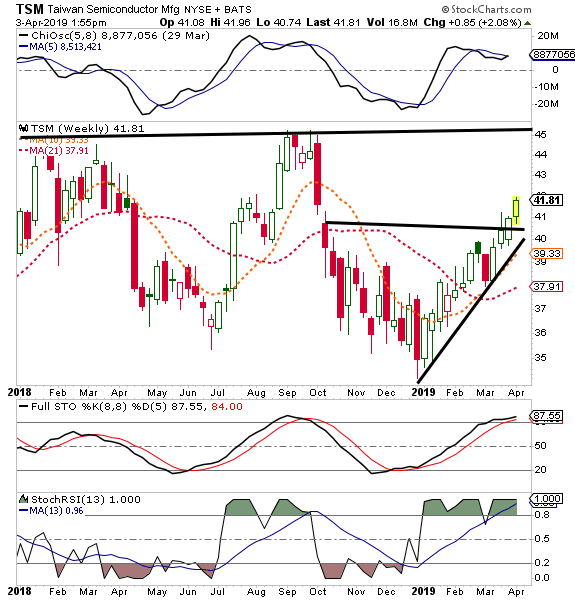 The move this week has continued a bullish breakout from last week that was also teased the week prior. As long as TSM remains above the $40 level on a closing basis this Friday, the technical picture continues to point higher. TSM could run as high as $45 here, but I believe a lot of what we see with the stock will simply fall in line with the rest of the semiconductor sector. We have a stock trading with a mid-teen P/E and growth in the high single digits to low teens. The yield around 3% will bring in some blend investors as well.

Again, this is a name I like, but don't love. It makes for a nice holding in a blended portfolio, but for those seeking to be more aggressive, especially on the tech side, I would look towards a higher growth name.

Get an email alert each time I write an article for Real Money. Click the "+Follow" next to my byline to this article.
TAGS: Investing | Markets | Stocks | Trading | Semiconductors & Semiconductor Equipment | Stock of the Day