The global shortage of all kinds of semiconductor chips is not only ongoing, it appears to get worse. Average lead times (time elapsed from order placement till delivery) for the industry in aggregate have increased for a ninth consecutive month to a now daunting 21.7 weeks in September, according to Susquehanna Financial Group.

Simultaneously, Taiwan is home to the one company that has become planet earth's runaway leading semiconductor foundry. A lot of firms you know... Marvell Technology (MRVL) , Apple (AAPL) , Broadcom (AVGO) , and Advanced Micro Devices (AMD) , among many others, lean heavily upon Taiwan Semiconductor (TSM) .

Meanwhile, as Beijing (mainland China) watches its economy grind to an awful slowdown, led by a still to be determined how deep collapse in debt riddled real estate markets, and desperately tries to decentralize power around the communist party, one tactic taken up my the mainland has been to regularly harass the independently governed isle of Formosa (Taiwan) militarily. Are they attempting to provoke a response by Taiwanese armed forces? Is this an attempt to distract the people of China from the gross mismanagement of a nation, and unite them around a cause?

How Important is Taiwan?

On it's own, very important. As home to Taiwan Semiconductor? Invaluable. Perhaps not officially in response to, but in the wake of maybe 150 sorties by Communist Chinese military aircraft into Taiwanese airspace... the U.S. Navy this week has participated in military exercises in the region with the navies of Japan, the UK, Canada, The Netherlands and Australia.

Much like Costco (COST) , foundry to the electronic world, Taiwan Semiconductor (TSM) posted monthly sales on Friday. September revenue gapped 19.7% year over year, and 11.1% month over month to NT$152.69 billion (NT$ = New Taiwan Dollar) or $5.44 billion in U.S. currency. Revenue for the quarter (though earnings will not be released until late next week.) appears to add up to NT$414.7 billion ($14.8 billion), which is slightly above estimates which are made easier due to the monthly updates.

Earnings per American Depository Share are projected at a consensus of $1.03 by the four analysts that comprise "the street" for this name. Nobody is too far away from anyone else. Should these numbers hold up, this performance would amount to earning growth of 12% on revenue growth of 20.3%. We'll need to see an update on margin as one would expect the $100 billion that TSM expects to spend over the next three years to increase production capacity to have an impact. Not only is TSM trying to meet demand, but also to defend itself from Intel (INTC) , as that firm is attempting to break back into the contract foundry business and is building new facilities in Europe. 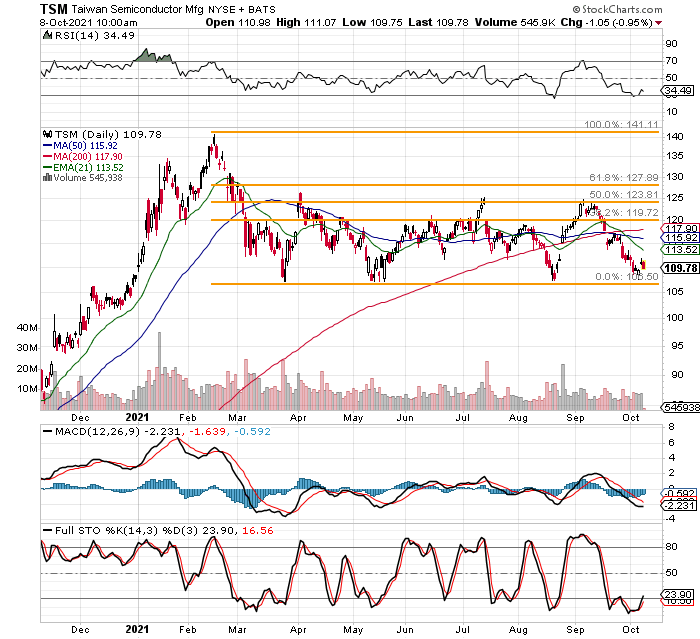 I am long this name, and I am up but not because the stock has been great. I am up because I am a sentient being, and the shares have bounced off of the SAE support level all year long. That said, Taiwan Semi is performing. The biggest threat is geopolitical in nature. The shares are badly oversold if you listen to the Full Stochastics Oscillator. The daily MACD is gross, and the RSI, if not quite oversold, sure ain't pretty.

We have a seven month ongoing basing pattern after an early year selloff. The shares have met their fate on every attempt to rally at one of Leonardo's retracement levels, but not the same one each time. I think the September data bodes well for a number of my long positions reliant on this name as well as this name itself. For me, this is a long-term investment, given what they do, and the nature of the modern world, That said, I do trade the position. I will sell some at $119 and $123, If TSM heads south before it goes north, where do you think I will add? Yes, you in the back... $107/$108? Excellent. Give that youngster a cheeseburger.

Get an email alert each time I write an article for Real Money. Click the "+Follow" next to my byline to this article.
TAGS: Investing | Markets | Stocks | Technical Analysis | Trading | Semiconductors & Semiconductor Equipment | Technology | China