In his first "Executive Decision" segment of Mad Money Monday night, Jim Cramer spoke with Mike Sievert, president and CEO of T-Mobile US (TMUS) , the wireless provider that has evolved into the nation's largest 5G carrier.

Sievert said that after years of AT&T (T) and Verizon (VZ) leading the 4G wireless era, in the 5G era, T-Mobile has emerged as the clear winner and is now setting the standard.

When asked how a scrappy No. 3 player was able to unseat two behemoths, Sievert explained that AT&T and Verizon simply took their eye off the ball with media mergers, acquisitions and partnerships that all ultimately failed. T-Mobile is a pure-play 5G Internet provider and they're years ahead with the right spectrum, technology and customer-friendly policies.

Let's review the charts of TMUS again. In our April 19 review we wrote that "The charts of TMUS are positive looking. Traders could go long TMUS at current levels or add to existing longs. Risk to $124. The $156 area is our price target once TMUS breaks the December/January highs."

The daily On-Balance-Volume (OBV) line shows a steady rise the past 12 months telling us that buyers of TMUS have been more aggressive. The Moving Average Convergence Divergence (MACD) oscillator is in a bullish alignment above the zero line.

In this weekly Japanese candlestick chart of TMUS, below, we see a positive picture. Prices are in a longer-term uptrend above the rising 40-week moving average line. I see no top reversal patterns from the candles. The weekly OBV line has moved higher to confirm the price gains. The trend-following MACD oscillator is bullish and pointed higher.

In this daily Point and Figure chart of TMUS, below, we can see that prices just made a new high for the move up and the software is now projecting the $166 area as a potential price target. 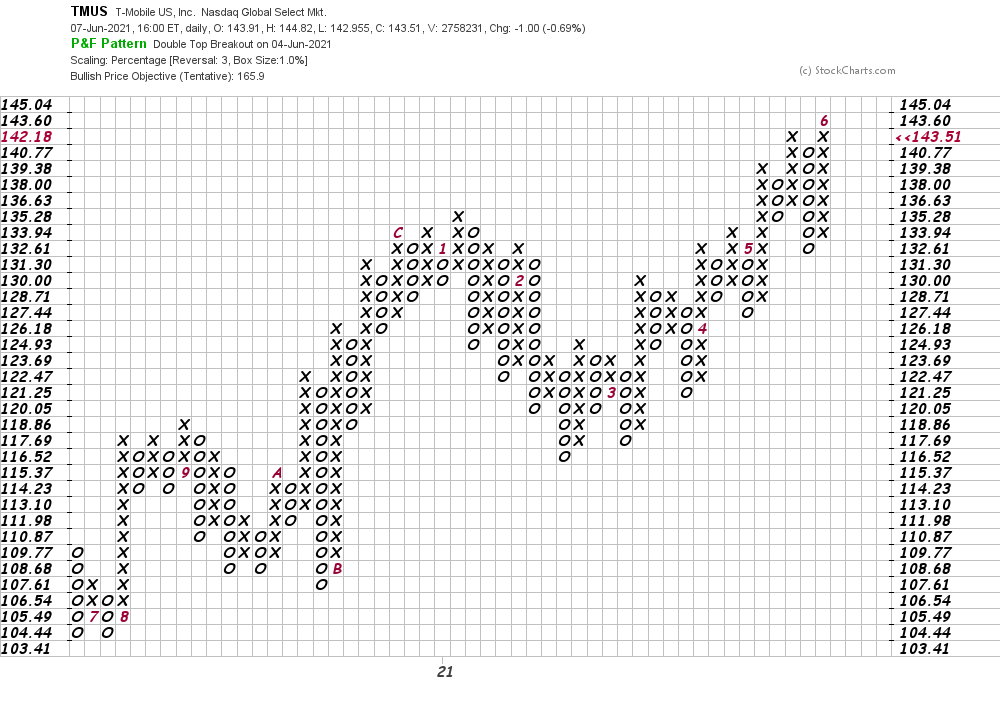 In this weekly Point and Figure chart of TMUS, below, we used close only price data and can see a $182 target.

Bottom line strategy: Traders who are long TMUS from our April review should continue to hold those positions but raise stop protection to $130 from $124. Our price targets are now $166 followed by $182.

Get an email alert each time I write an article for Real Money. Click the "+Follow" next to my byline to this article.
TAGS: Investing | Stocks | Technical Analysis | Trading | Technology | Telecommunications | Mad Money | Executive Interview | Telecom Services