Several of the nation's largest banks released data for fourth quarter financial performance on Friday morning. Among them were JP Morgan (JPM) , Citigroup (C) , and the nation's fourth largest bank by assets held, Wells Fargo (WFC) . The stock of Wells Fargo had come into the numbers strong, up 17% year to date as of Thursday's closing bell versus the KBW Bank Index, which closed on Thursday up 12% for 2022.

For the quarter, Wells Fargo posted GAAP EPS of $1.38, beating Wall Street by a rough quarter dollar or so. The $1.38 does include $0.18 per share attributable to the sale of the bank's Corporate Trust Services business and Wells Fargo Asset Management, so even adjusted, this is a beat. Revenue generated over the reporting period totaled $20.86B, which was good for year over year growth of 12.8%, and trounced Wall Street's expectations by well more than $2B.

Safe to say, and make no mistake, I am biased... that CEO Charles Scharf is indeed turning this bank around. Non-interest expenses printed at $13.198B, down from $13.3B for Q3, and down from $14.8B for the year ago comparison. Provisions for credit losses dropped to $-452M, benefitting from a release of $875M that the firm had set aside early in 2020 to cover pandemic-related loan losses that never materialized. This may in some way bloat profitability for the quarter, but understand that this provision is real profit that had been held back prior.

Wells Fargo CEO Charles Scharf commented, "As the economy continued to recover we saw increased consumer spending , higher investment banking fees, higher asset-based fees in our Wealth and Investment Management business, and strong equity gains in our affiliated venture capital and private equity businesses." Scharf then said, "We continued to manage credit well and the strong economic environment helped reduce charge-offs to historic lows and our results benefited from reductions in our allowance for credit losses."

Performance is lumpy for each segment as is profitability. We'll go at this in descending order according to revenue generated.

- Corporate. Revenue printed much higher, up 113% to $3.12B. Net income printed up 736% at $916M. If these numbers seem unrealistic, they were produced by one time sales of the firm's Corporate Trust Services business and Wells Fargo Asset Management. Non-interest expense, likewise... declined 55%.

I like Wells Fargo. I am long Wells Fargo. I like Charlie Scharf. Regular readers know this well. That said, I came into these numbers buttoned up nicely so I couldn't lose a ton of dough. That added a little more than half a buck to my net basis, which is in the mid-$30's so the protection allowed me to sleep last night.

Wells Fargo is more reliant upon traditional banking than are other large banks. Higher interest rates would be more of a plus for Wells Fargo than for their competitors. The other side of the coin would be that higher interest rates will slow mortgage origination which is a big deal here. I also see the potential for the Fed to remove the still in place asset cap from Wells Fargo for the scandalous problems that Charles Scharf was brought in to clean up. He is cleaning up that mess. That said, who overviews banking at the Federal Reserve Board of Governors matters to Wells Fargo.

All that said, I believe that WFC has a bright future, a potentially brighter future than its competitors. I just think we have to be careful here, as we are closer to what I consider to be my target from where I started this journey. 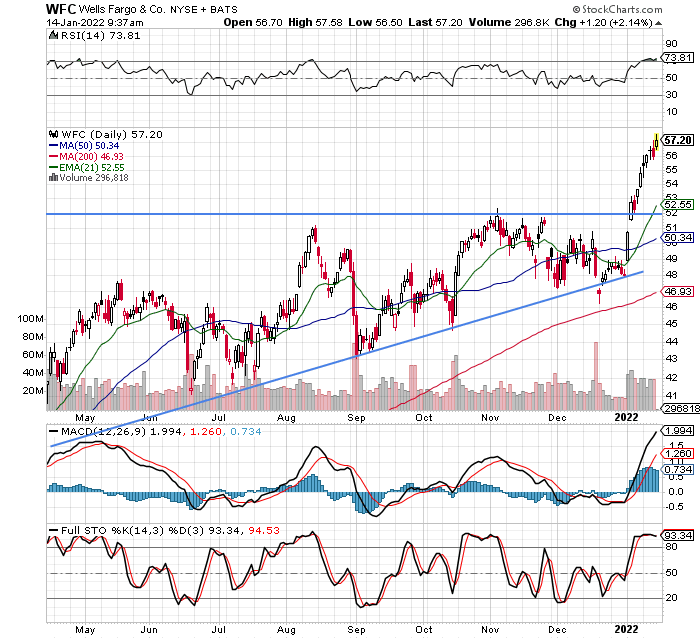 Some of you have seen this chart already. Nothing has changed. WFC is still breaking out from a wonderful looking ascending triangle that produced our $52 pivot. My target price remains $62. I own the $55 puts expiring later today, if I don't need them. My panic point will drop to $49, which is a buck below the 50 day SMA.