Synonyms for the word might be eminence, or impressiveness. How about magnificent? Certainly no one would equate words like insignificance or obscurity. Yet, here we are. Every day. Dead of night. There are a thousand reasons to be somewhere else. You only needed one of them. Still you showed up. There are hundreds of ways to be distracted. Still you focus. People count on you. Forever, that is why you.. why we rise. Borrowing from The Bard... We few, we happy few, we band of siblings... like those outnumbered on that day, we shed something day in and day out. Together. Though quite obscure, the "greatness" that we share is indeed a bond of silent beauty. No one knows. No one but us. Who is magnificent? Easy answer. Take a second, look in the mirror, or the blackened window that stands at attention before us. You. You are the one. You shall not stand alone on this day.

Tis the onset of slow death. So they say. Perhaps such thoughts are extreme. Retail Sales as released by the Census Bureau have become wildly inconsistent from month to month. Perhaps that means that the weather really is to blame when a series of retailers report weaker than expected sales growth, or should I say sales contraction? You know what I see? I see a 16.9% average credit card interest rate, which is the highest average rate ever recorded by the Fed, and is directly attributable to the Fed's own reckless behavior in late 2018.

Would this not impact e-commerce you say? To that, I say of course.. it already is. Let's revisit the April Retail Sales data (which is not part of this reporting season, mind you), Non-store retailers printed at -0.2% month over month, despite a league leading 9.0% growth year over year. Hmm. Let's try to put two and two together. Now that the Fed has more or less acknowledged that error without directly coming out and saying so, do credit card rates abate at all? They should at a minimum stabilize here. Lenders will not maintain these rates if nobody takes a bite. That's not a business model. The model only works if you end up paying $45 over time for that $20 toaster, and don't realize it.

Walmart (WMT) put together a very solid season. Walmart mentioned a larger average ticket on their call. Walmart caters to the working class. This makes sense. We'll hear from Target (TGT) this morning. How interesting? How about Kohl's (KSS) . I took a bite of that apple on Tuesday, which looked smart for most of the day, until the name came back in late. I left plenty of room for addition. I would say, no sweat, but we have to sweat the retailers as the environment continues to evolve.

Kohl's has plenty of potentially exciting initiatives in place yet to really take root. At these prices, the firm pays nearly 4.9% to shareholders just to stick around. That makes the shares somewhat defensive in nature at these levels. That's why I'm here. My thoughts there? The stock may move lower as this week progresses, but anything below let's say 51/52 would be pure gravy. At least that's what my favorite 12th century Italian mathematician friend whispers in my ear as I sit before that empty window by myself.

Let's not forget, the partnership with Amazon (AMZN) is nowhere near fully implemented as of yet, and the firm's other highly touted experiment, the deal with Planet Fitness (PLNT) whose business model I love, is in it's infancy. That one, I don't really understand, and will have to see work in person to assess the interaction, and how customers behave around the dynamic. I also want you to keep in mind that the firm lowered guidance as part of their performance delivery. These shares came into Tuesday 60% owned by funds. That makes the shares cumbersome. You can see through yesterday's volume that some of these sales were forced by risk managers. After the last of these non-traders have run, these shares will be cheap, and will be measures against a lowered bar in three months.

A Voice In The Night

Very, very early this morning (Wednesday), St. Louis Fed President James Bullard spoke from Hong Kong. Like the man or not, I do have to give Bullard some credit. His message had been consistent for quite some time now. Oh, and by the way, he does vote on policy this year. Check out this quote... "A downward policy rate adjustment even with relatively good real economic performance may help maintain the credibility of the inflation target going forward." Bullard then added, "A policy rate of this sort may become a more attractive option if the inflation data continue to disappoint."

Do I think we need a rate cut? No, not yet, but have you seen the yield curve? I know you have. Basically, the U.S. sovereign debt yield curve inverts form either the 30 day or 90 day T-Bills right through the 7 year of 10 year note every day that the equity markets get slapped around. We all know this not to be healthy, and if markets are having a difficult time accepting the idea of higher inflation or sustained growth going out a number of years, then the obvious thing to do would be to pressure short term yield. Granted Bullard is thought of as a dove, but his point is not completely without merit. I have said it until I have been blue in the face, repairing the yield curve should have always been job one. The economy will never function normally, or at least in a more sustainable, healthy way until this is accomplished. Why is this so hard to understand?

You would have to guess that the messaging sent by one president was not lost on the other. China's Xi Jinping toured a region in southern China on Monday, Jiangxi province, that is also known as the "rare earths kingdom." For those unaware, rare earths are a group of 17 chemical elements that though prevalent throughout the world, are difficult, or even dangerous to process. What I am trying to say is that several of these elements are a necessity ingredient for the manufacture of cell phones, LED lighting, as well as providing a way to cool nuclear rods after heating. These minerals are also key to national security. Without them, there are no gyroscopes for fighter aircraft, and there are no night-vision capabilities.

The problem is that the process of creating usable metals out of these elements creates a lot of pollution, and in some cases not normal pollution, the process can emit radiation. For those reasons, the U.S. imports about 80% of what they need across this space from China, and China has become the key producer to the world. What President Xi is doing is informing President Trump of his cognizance of our vulnerability in this arena. President Trump has not imposed tariffs on rare earth imports by the way, even as China has increased tariffs on U.S. rare earths sent to China to be processed from 10% to 25% as of this June 1.

You know my thought here. In time, I wonder if someone else would be interested in processing these rare earths for profit. Just thinking out loud. Australia, Russia, India, all stand out as possibilities. Maybe Vietnam. Vietnam would welcome the business. In fact, Vietnam has already welcomed the U.S. Navy at DaNang as a port of call. Just a thought. A thought for U.S. adversaries to consider.

The U.S. Air Force likes them both. If the money is there. The fifth generation Lockheed Martin (LMT) F-35. Steath. The fourth generation Boeing F-15X. More highly armed. Incredibly, there are still Eagle drivers all these years later. Two months back, the Air Force ordered 48 F-35's and 80 F-15X's to be delivered over the next five years... as long as there is no budget squeeze. That's the catch here. Should a tighter defense budget be enforced as Congress tries to reach a deal going forward, the F-35's will be a higher priority, as a later generation, higher tech aircraft than would be the F-15's making that purchase something less of a sure thing.

You may or may not recall that Lockheed Martin absolutely crushed expectations for both EPS and revenues last month. The firm also significantly raised guidance for the full year, on the strength in sales generated by all four of the firm's segments. Aeronautics (+27%), Missiles and Fire Control (+40%), Mission Systems (+17%), and Space (+13%). Last week, LMT landed a $1.1 billion contract to build 12 new Sikorsky CH-53K King Stallion heavy lift, high capacity helicopters for the U.S. Navy. The King Stallion replaces the Super Stallion, which replaced the Sea Stallion for you old Devil Dogs out there that might have been wondering.

I bring this to your attention because LMT has simply broken out, and I think has a chance to keep on going. Even at these prices, the shares trade at just 13 times forward looking earnings, earnings that are expected by Wall Street to climb 13% for the year, and then 21% the next, by the way. Let's take a look. 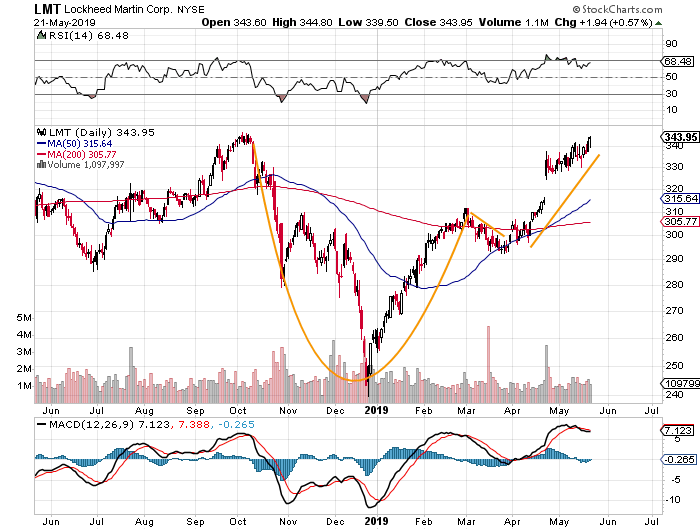 As you can see, this name left the pivot area of roughly $311 in the dust a month ago. Given the distance from the bottom in December to the upper right topside of this cup, and then the shallow trajectory of the handle, while we already have something explosive to look at here, I would have to place my target price at $375, while moving my add up to $315, and my panic up to $295. We have a real winner here. Even if my target is too aggressive, we do not want to give back hard fought gains after the environment that we toughed out in late 2018.

For those wishing to ask about some other defense names that I have backed in the past... Yes, I am still long some Raytheon (RTN) , which has admittedly disappointed. The shares currently trade around net basis, so nothing lost, but a lot of effort for almost nothing. Yes, I am still long Kratos (KTOS) , which has been a major winner for us. That name is now in ball park range of our $22 price target, but to be honest, I will probably start letting some air out of the tires around $21.50.

Get an email alert each time I write an article for Real Money. Click the "+Follow" next to my byline to this article.
TAGS: Earnings | Federal Reserve | Investing | Options | Stocks | Technical Analysis | Defense | Retail | China | Market Recon