Nike, Inc. (NKE) is in the news headlines today and not because of an earnings' announcement. It seems some traders are selling shares of the company because Duke University star basketball forward Zion Williamson injured his knee wearing Nike's PG 2.5 sneaker. Supposedly his foot slid on the floor and his Nike made shoe "exploded, twisting his knee and sending him sprawling."

Book makers around the country are figuring out what to do. Sell side fundamental analysts are tweaking their spread sheets this morning and researching other instances of when something like this has happened before and what it has meant for the company's stock.

All of that is good but I want to see how the chart and indicators are positioned to see if this event will be lasting or temporary. Let's check out the charts this morning.

In this daily bar chart of NKE, below, we can see that NKE rallied from last March to September, rewarding investors with a $64 to $86 run. A correction unfolded from October to late December with prices retesting the $70-$64 support area from last spring. Prices rebounded from near $66 to near $86 the past seven weeks.

Last week the quicker to react 50-day line crossed the 200-day line for what is commonly referred to as a "golden cross". Moving averages are a great black or white technical tool in a trending market but traders and investors always need to keep in mind that their signals are always late at turning points. Golden crosses (and death crosses) are only successful in long-trending markets.

Now let's look at the trading volume - the other item that comes from the marketplace. You can see that volume was heavy at the December nadir as some traders probably dumped shares and others saw it as a buying opportunity. What you do not see is trading volume increasing on the rally from the December low. Market observers and technical analysts like to see volume expand in the direction of the trend. Uptrends should see increased volume and an uptrend that lacks volume is sometimes "suspect".

The daily On-Balance-Volume (OBV) line gives us the same conclusion about volume as the OBV line is below its September high while prices are back to their prior peak. The second rally to $86 is not as strong as the first rally.

The Moving Average Convergence Divergence (MACD) oscillator was rolling over the past two or three weeks ahead of today's decline. Today we are likely to see a bearish crossover and take profits sell signal from this indicator.

In this weekly bar chart of NKE, below, we can see a nice base pattern in 2016 and 2017, but in the past six months we see a potential double top formation. Yes, prices are above the rising 40-week moving average line but we know that moving averages are lagging indicators. Like the daily chart above we can see that volume has declined in recent months.

The weekly OBV line shows an uptrend from the middle of December but the line is still below its best levels of 2018.

The weekly MACD oscillator crossed to an outright buy signal in early January but now we will be watching to see if this indicator begins to narrow.

In this Point and Figure chart of NKE, below, we can see that prices stopped short of a breakout and new high of $86.45. Yes there is a price target of $87.36 indicated but that does not mean that NKE has to get there.

Remember that technical analysis is more like a wind sock at the airport than a crystal ball. We get the direction of prices but we certainly cannot call nor explain every zig and zag. 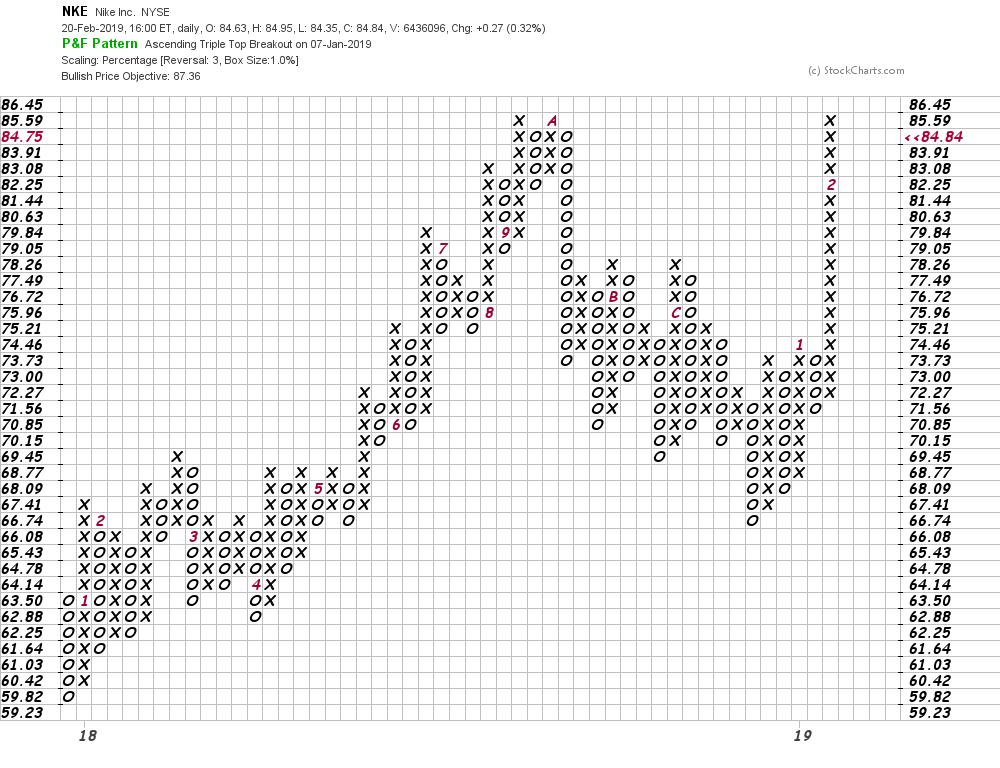 Bottom line strategy: I am 100% sure that there will be lots of discussion about what this "news" means for NKE but at the end of the day all that matters (to me at least) is the direction of the stock price. The charts and indicators, in my opinion, were suggesting caution before the news so investors must have been focusing on something else in the months ahead. I would get defensive if NKE closes below $83.08.

Get an email alert each time I write an article for Real Money. Click the "+Follow" next to my byline to this article.
TAGS: Investing | Stocks | Technical Analysis | Trading | Apparel | Sports business | Sports | Stock of the Day