For the Executive Decision segment of his "Mad Money" program last Friday, Jim Cramer spoke with Jay Chaudhry, chairman and CEO of Zscaler Inc. (ZS) , the cybersecurity company with shares that have plunged from $89 to $51 a share in recent weeks.

Chaudhry said Zscaler is seeing no significant change in its business. He said some of the attacks on the company coming from legacy security vendors are exactly the kinds of things you'd expect when legacy vendors get displaced by better technology.

When asked about his comment on Zscaler's conference call about larger deals taking longer to close, Chaudhry explained that Zscaler was still able to beat on both earnings and revenues and is still seeing lots of growth in its business. Chaudhry added that Microsoft Corp. (MSFT) is a great partner for Zscaler and upstart CrowdStrike Holdings Inc. (CRWD) offers complimentary services to Zscaler's platform.

Let's check out the charts of ZS to see if they can reverse their downtrend.

In this daily bar chart of ZS, below, we can see that buyers of ZS who got on board early in October got to see their investments double and nearly triple by the end of July. Prices turned up above the rising 50-day moving average line in January and above the newly rising 200-day line. Dips to and around the rising 50-day line were buying opportunities until this August. ZS broke below the line and the moving average slope turned negative. Earlier this month the 200-day line was broken with a gap to the downside and now the average line is cresting (rolling over).

The On-Balance-Volume (OBV) line did its job by turning up in November and peaking in June -- leading on the upside and the downside with signs of aggressive buying and then aggressive selling. The OBV line plunged in August and September, telling us of heavy liquidation (selling). The 12-day price momentum study has made lower lows with prices the past two months, so we have yet to see signs that the decline is slowing.

In this weekly bar chart of ZS, below, we only have data back to early 2018. Prices are back toward a possible area of support that back in 2018 acted as resistance. ZS is below the cresting 40-week moving average line. Trading volume was very heavy on the decline and the weekly OBV line is bearish. The Moving Average Convergence Divergence (MACD) oscillator is in a take profits sell mode but still above the zero line. There is no sign of narrowing of the two averages that make up this indicator.

In this Point and Figure chart of ZS, below, we can see an upside price target of $64 projected. 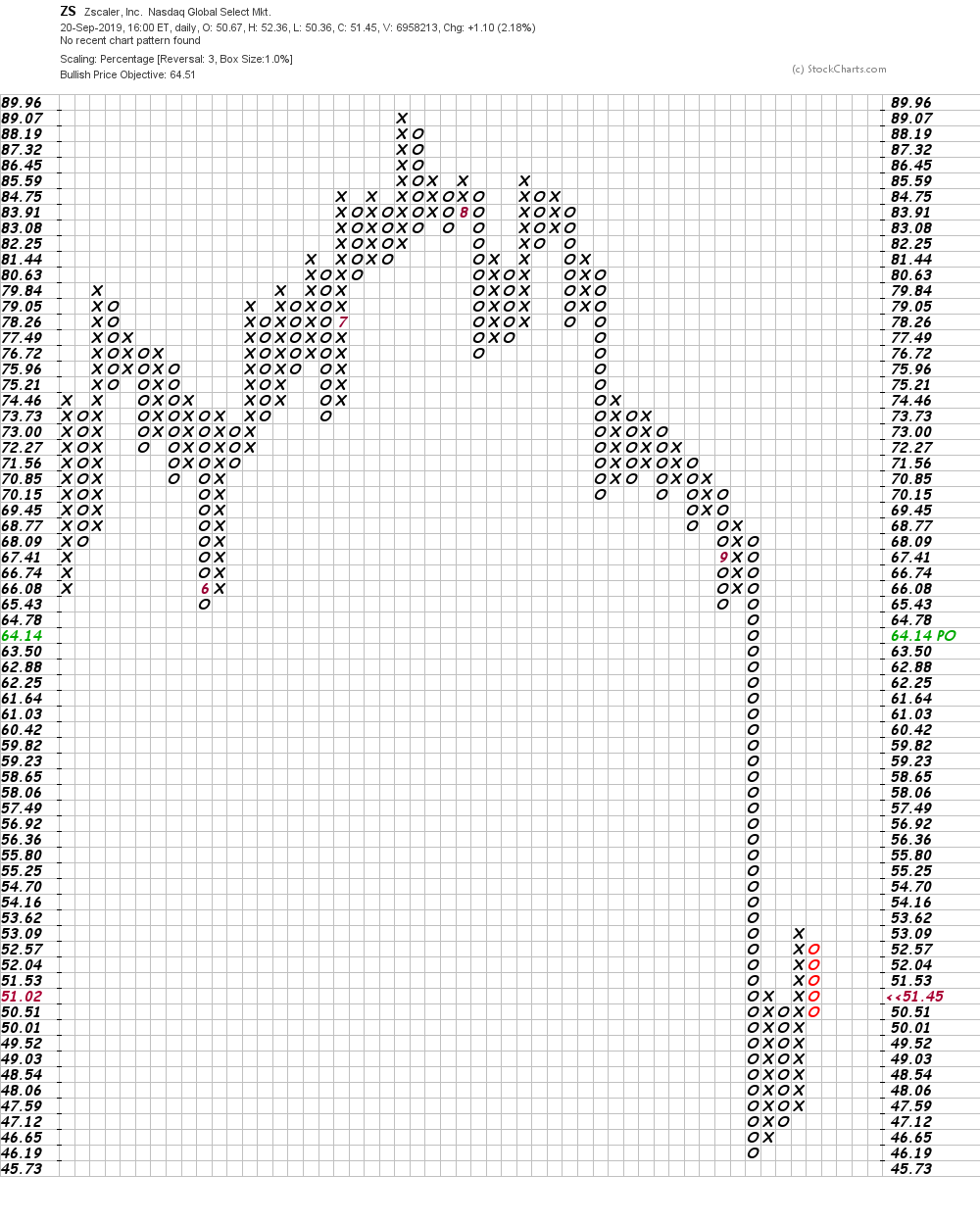 Bottom line strategy: Markets and investors anticipate. They turn down and up before the news is widely known. ZS could rebound to the underside of the 200-day average but I would expect that prices try to rebase in the $45 area. Let other traders use their money to develop a new base.