The shares plunged 15.7% Friday following the report, but still trade for a lofty 36 times sales.

Chaudhry explained that momentum is still pulling in Zscaler's favor and they're still keeping their customers safe from attacks. The company just crossed $1 billion in annual recurring revenue and Chaudhry sees a path to $5 billion.

Chaudhry explained that while all segments of their business are growing, their federal government sales came in light. That's because the government is operating on stop-gap funding, he explained.

Let's check out the charts and technical indicators. In our Nov. 29 review of ZS we said "... traders should reduce their long exposure and raise stops on any remaining longs to $330."

In the daily bar chart of ZS, below, we can see that the shares made a high in November and turned lower. ZS has broken below the rising 200-day moving average line and traders below the declining 50-day line. The trading volume has been heavy since December and really surged on Friday. The On-Balance-Volume (OBV) line has moved sideways to lower since the middle of November.

The 12-day price momentum indicator shows higher lows from December to January to now. This improvement in price momentum tells me that the pace of the decline is slowing and that tends to happen when there is scale-down buying by farsighted investors.

In the weekly Japanese candlestick chart of ZS, below, we can see that prices have broken below the rising 40-week moving average line. We can see a lower shadow in January and another lower shadow last week telling us that there is some rejection of the lows.

The weekly OBV line has been in a decline since November and is weaker than the daily line (above). The 12-week price momentum study is showing some improvement the past four weeks telling us that the decline is slowing.

In this daily Point and Figure chart of ZS, below, we can see that prices reached and exceeded a downside price target in the $219 area. 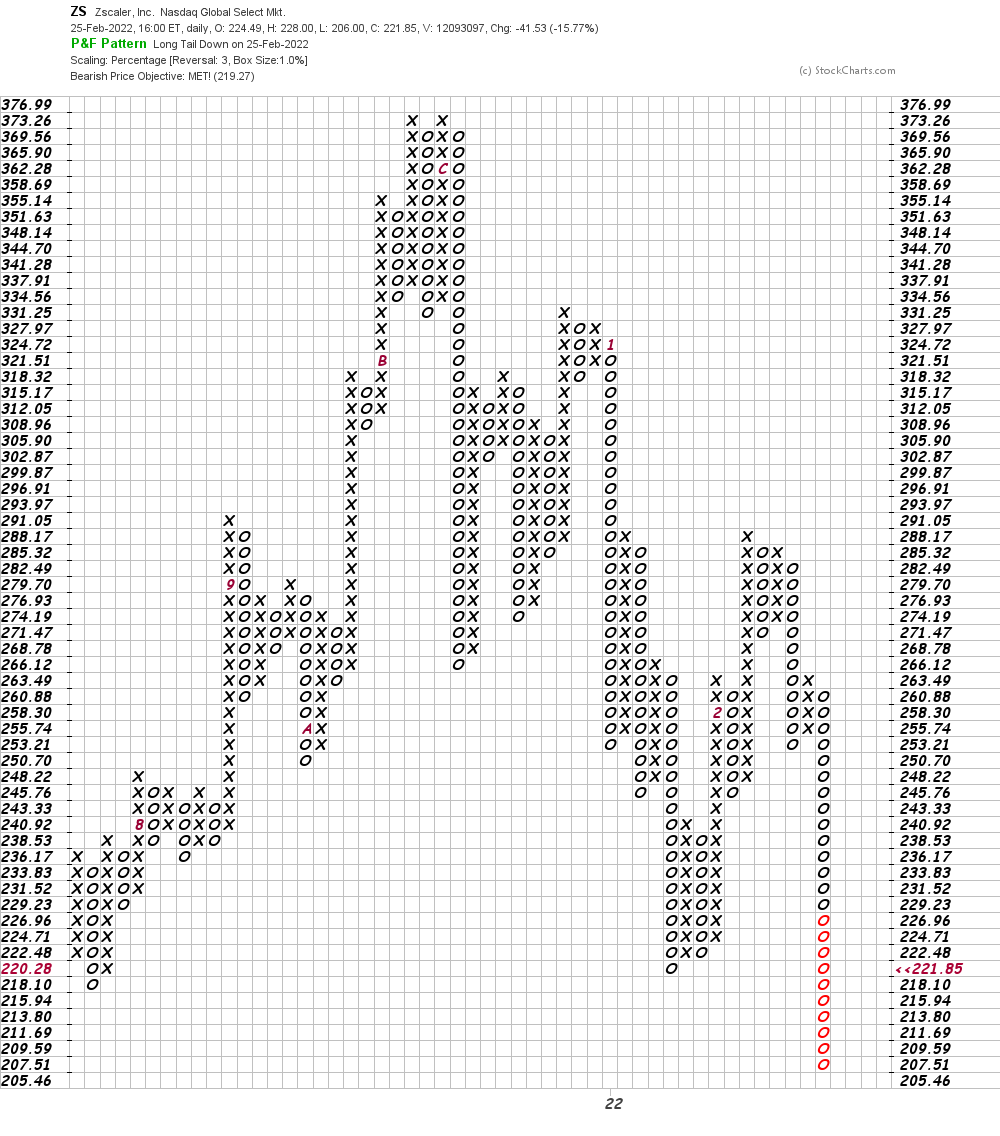 Bottom-line strategy: Friday's Japanese candlestick pattern was a hammer (not shown) and this could be a bottom reversal but we need to see some bullish confirmation Monday. ZS might make a temporary low and rebound for a few weeks but that is not the kind of trading I really like to do. A better approach is to stick to charts that are still in uptrends.

Get an email alert each time I write an article for Real Money. Click the "+Follow" next to my byline to this article.
TAGS: Earnings | Investing | Stocks | Technical Analysis | Cybersecurity | Software & Services | Technology | Mad Money | Executive Interview