Yuan said over the past few weeks Zoom has experienced a surge in new users. He noted that with end-to-end encryption enabled many popular features, such as calling into meetings via phone and cloud recording, would not be available.

Yuan said only in rare cases should meeting traffic go through China. He also said the "Zoom bombing" trend of uninvited guests logging into meetings can be thwarted by applying best practices.

Let's call in for Zoom's charts and apply our best practices to them.

In this daily Japanese candlestick chart of ZM, below, we can see a lot of potential clues in less than 12 months of trading history. Prices made an initial rally after Zoom's initial public offering (IPO) in April 2019. The rally ran out of steam and prices pulled back to a second low in October. We can see a successful retest of that low in December before prices launched a strong rally into March. Prices were more than double their lows at the zenith. There is a small double top up at $160 and then a decline back to the rising 50-day moving average line. Monday's candle pattern shows a lower shadow at the average line, telling us that traders rejected those low prices.

The On-Balance-Volume (OBV) line has moved up and down with the price action since December. The Moving Average Convergence Divergence (MACD) oscillator is above the zero line in positive territory, but we can see a downside crossover for a take profits sell signal.

In this weekly Japanese candlestick chart of ZM, below, we have the same length of price history as the daily chart. The big difference that is easy to see is the large bearish engulfing pattern in March. The weekly OBV line does not show much in the way of aggressive selling and the MACD oscillator only shows the beginning of some narrowing.

In this daily Point and Figure chart of ZM, below, we can see that the software is projecting a potential downside price target in the $71 area. 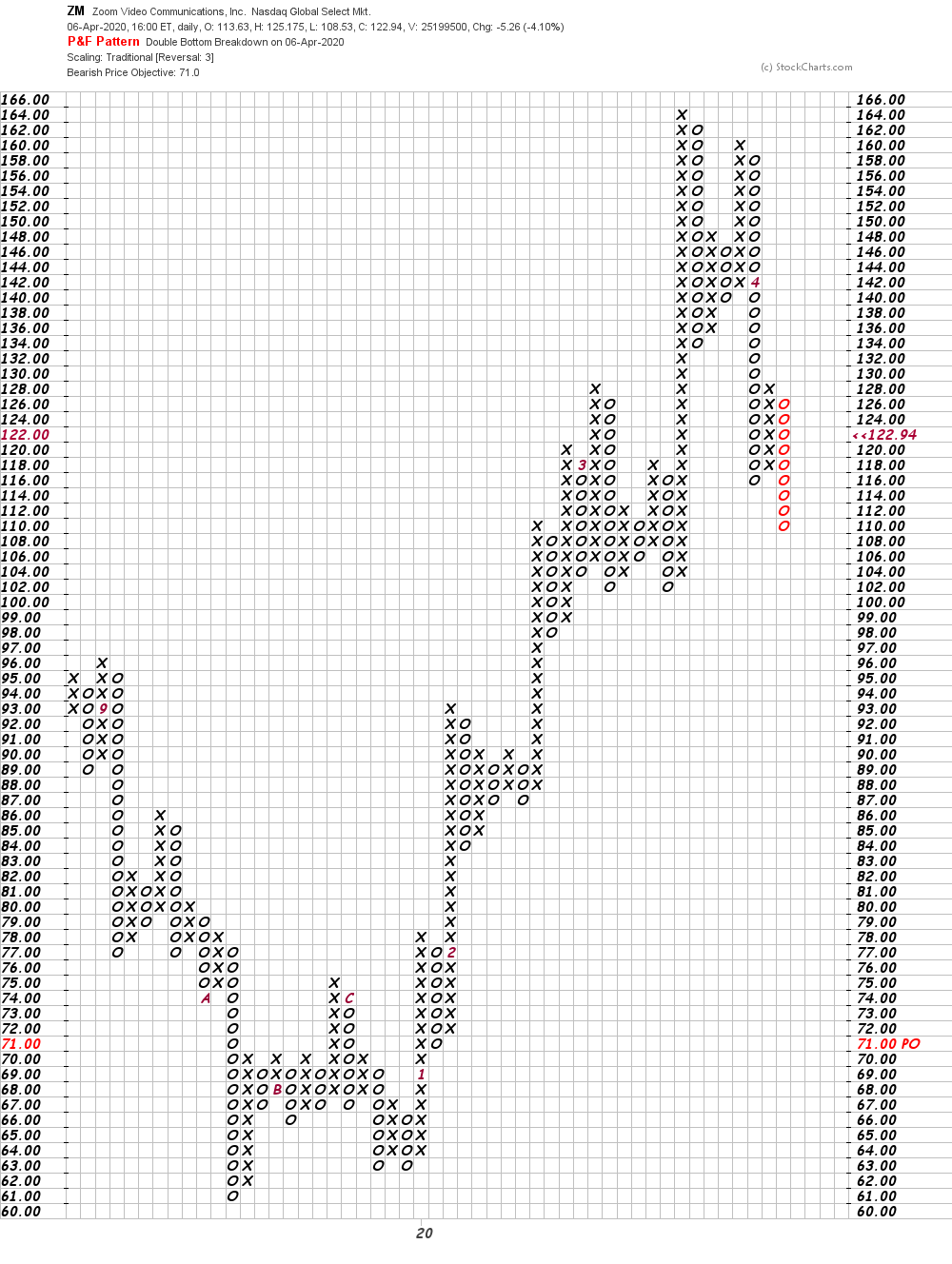 Bottom line strategy: The charts above show that there is likely more risk in a long position than two or three weeks ago. The current market environment is not very forgiving, so any remaining longs should be stopped out just below Monday's low.

Get an email alert each time I write an article for Real Money. Click the "+Follow" next to my byline to this article.
TAGS: Investing | Stocks | Technical Analysis | Technology | Telecommunications | Mad Money | Executive Interview | Real Money | Coronavirus