We knew if I complained a few days ago about breadth, it would improve. And so it has. But not enough to change any of the indicators. Not yet.

The McClellan Summation Index is still heading down, despite the new highs in the major indexes. It still needs a net differential of positive 500 advancers minus decliners on the New York Stock Exchange to halt the decline and obviously more to get it to turn up. That's after a 100-point rally in the S&P 500.

The cumulative advance/decline line still hasn't made a new high, either. And the number of stocks making new highs is still far below the peak readings. The New York Stock Exchange missed 200 new highs by one and Nasdaq has 175, but these are not impressive for a market that is at its highs.

However, take a look at the Overbought/Oversold Oscillators and you can see they have finally turned upward and are back over the zero-line. That is how lifeless this week's oversold rally has been. It is also why I have pegged early July as the point I believe the market will get back to an overbought level again. Next week the oscillators ought to spurt upward.

On the sentiment front, I have some good news, relatively speaking. The National Association of Active Investment Managers (NAAIM) did in fact reduce their exposure to the market -- by a wide margin too. They have gone from 98.5 to 70. Wow. Maybe my interpretation of them being growth stock fans is now incorrect and they finally moved to value just before value took a hit. Otherwise, it makes little sense to me that they would reduce exposure to growth, since growth and tech haven't seen much selling of late.

In any event, this coming down is a positive on the sentiment-front. Now that we see them jump around like day traders, it is possible they will have their exposure back up over 90 in early July, when we are back to overbought. In fact, it's likely. 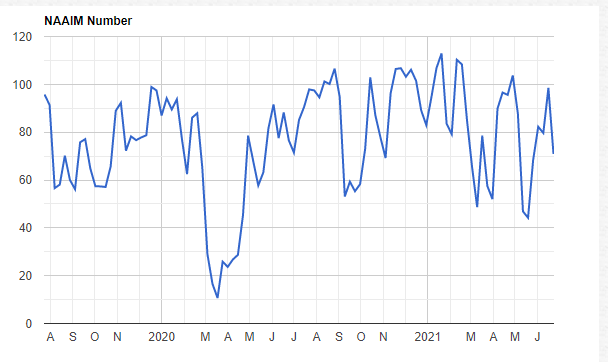 The put/call ratio dipped to .68 on Thursday, the lowest reading since June 9, and the first reading under .70 since then. So the conversion back to bullishness is here. The Equity put/call ratio on Wednesday was .39, which means this reading is back under .40 again.

The Daily Sentiment Index (DSI) for Nasdaq is now at 88. The DSI for the Volatility Index is at 14, likely because the VIX closed near the high of the day, otherwise the DSI would have been lower. I maintain that a down day in stocks would reset these two DSI readings for another push upward in the market next week, but even if that doesn't happen, I think you can see how sentiment is likely to be extreme again by early July when we are back to an overbought reading.