In the"No-Huddle Offense" segment of Mad Money Monday night, Jim Cramer reminded viewers that the "fear of missing out," or FOMO, should never be an investing strategy because it's always hazardous to your portfolio. By the time you've heard about a hot stock, the easy money has often already been made. Basically, you simply can't catch them all.

That is the case with enterprise-software company Zendesk Inc. (ZEN)  said Cramer, which has seen its shares rally more than 780% since its IPO way back in 2014. Cramer said while Zendesk is a great company with a great story, investors should not chase the stock at these levels. The company is now competing head to head with the likes of Action Alerts PLUS holding Salesforce.com (CRM) and Workday (WDAY) , yet ZEN trades for a premium by comparison.

Let's take a few minutes to look at the charts and indicators.

In the daily bar chart, below, we can see how ZEN outperformed in recent months versus the broad market. ZEN declined from October, but made its low in November and not December. ZEN made a higher low in December, and this month, it has broken out to new all-time highs.

The volume of trading has increased since November and tells us that investors in ZEN have become more and more interested. The daily On-Balance-Volume (OBV) line has trended significantly higher from November, telling us buyers of ZEN have been very aggressive.

The trend-following Moving Average Convergence Divergence (MACD) oscillator moved above the zero line in December for an outright go-long signal. The MACD oscillator stalled recently to mirror the price action.

In the weekly bar chart of ZEN, below, we can see part of the outsized gains Cramer noted last night. Despite a four-fold gain in the past three years, the chart is still bullish. Prices are above the rising 40-week moving average line.

The weekly OBV line has made a new high for the move up to confirm the move, and the weekly MACD oscillator is in a bullish configuration above the zero line after a buy signal last month.

In this Point and Figure chart of ZEN, below, we can see a relatively nearby price target of $87.34. 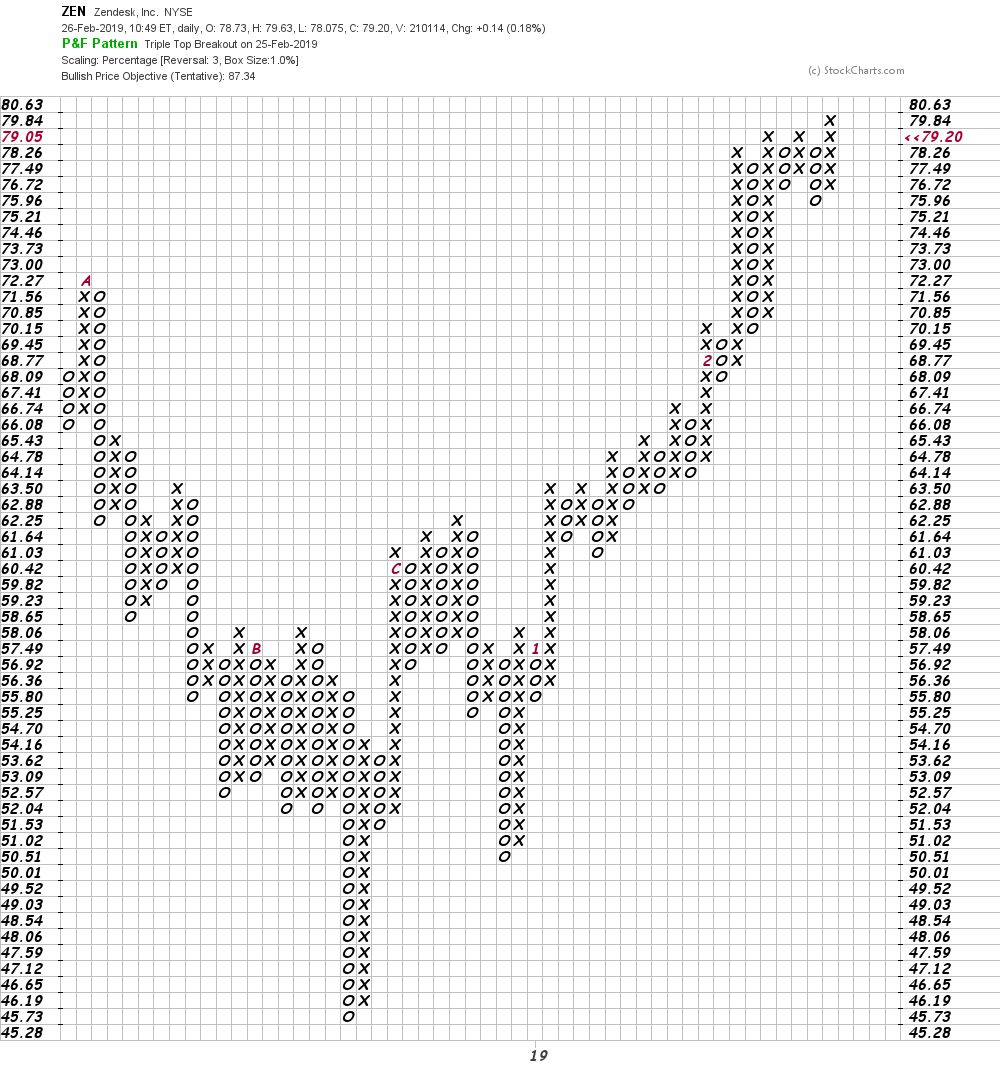 Bottom-line strategy:  Investors in ZEN have done very well. Prices are still pointed up, and I see none of the warning signs that typically precede a top. My next targets are $87 and then $95. Risk a close below $72 for now.

Get an email alert each time I write an article for Real Money. Click the "+Follow" next to my byline to this article.
TAGS: Investing | Stocks | Technical Analysis | Trading | Software & Services | Technology