In his second "Executive Decision" segment of Mad Money Thursday night, Jim Cramer sat down with Mikkel Svane, founder and CEO of Zendesk Inc. (ZEN) , the customer engagement software provider whose stock has rallied 52% so far this year.

Svane said that Zendesk has been around for over 10 years and during that time, customer expectations have been changing. It's no longer enough to have a great product or service if you can't also back it up with a great customer service experience. Svane added that the shift is partly a generational change, with younger customers simply not accepting calling a call center and being put on hold. He said today's customers want a fast, seamless experience when interacting with a company. That's why Zendesk works hard to integrate multiple channels into a single experience.

When asked about their accelerating revenue growth, Svane said Zendesk is simply keeping up with the growing demand. Let's round out the picture of ZEN with a look at the charts and indicators.

In the daily bar chart of ZEN, below, we can see that the stock bottomed in November and made a retest in December when the broad market bottomed. Prices rallied smartly in January and quickly broke out above the December highs to start a new uptrend. A bullish golden cross can be seen in early February as the 50-day moving average line crossed above the rising 200-day line. The 50-day line has been acting as support in April and May.

The daily On-Balance-Volume (OBV) line has been climbing from its November nadir and confirms the price strength. A rising OBV line is a sign of aggressive buying.

The Moving Average Convergence Divergence (MACD) oscillator has been above the zero line since early January and could turn higher again in the days ahead.

In the weekly bar chart of ZEN, below, we can see an impressive rally from around $20 back in early 2017 to around $90 now. Prices are above the rising 40-week moving average line.

Trading volume has increased since early 2018 and the weekly OBV line has making new highs for the move up the past three or four months.

The weekly MACD oscillator narrowed from March to April but it is still pointed up.

In this Point and Figure chart of ZEN, below, we can see the uptrend and recent breakout to new highs. A $102 price target is also displayed. 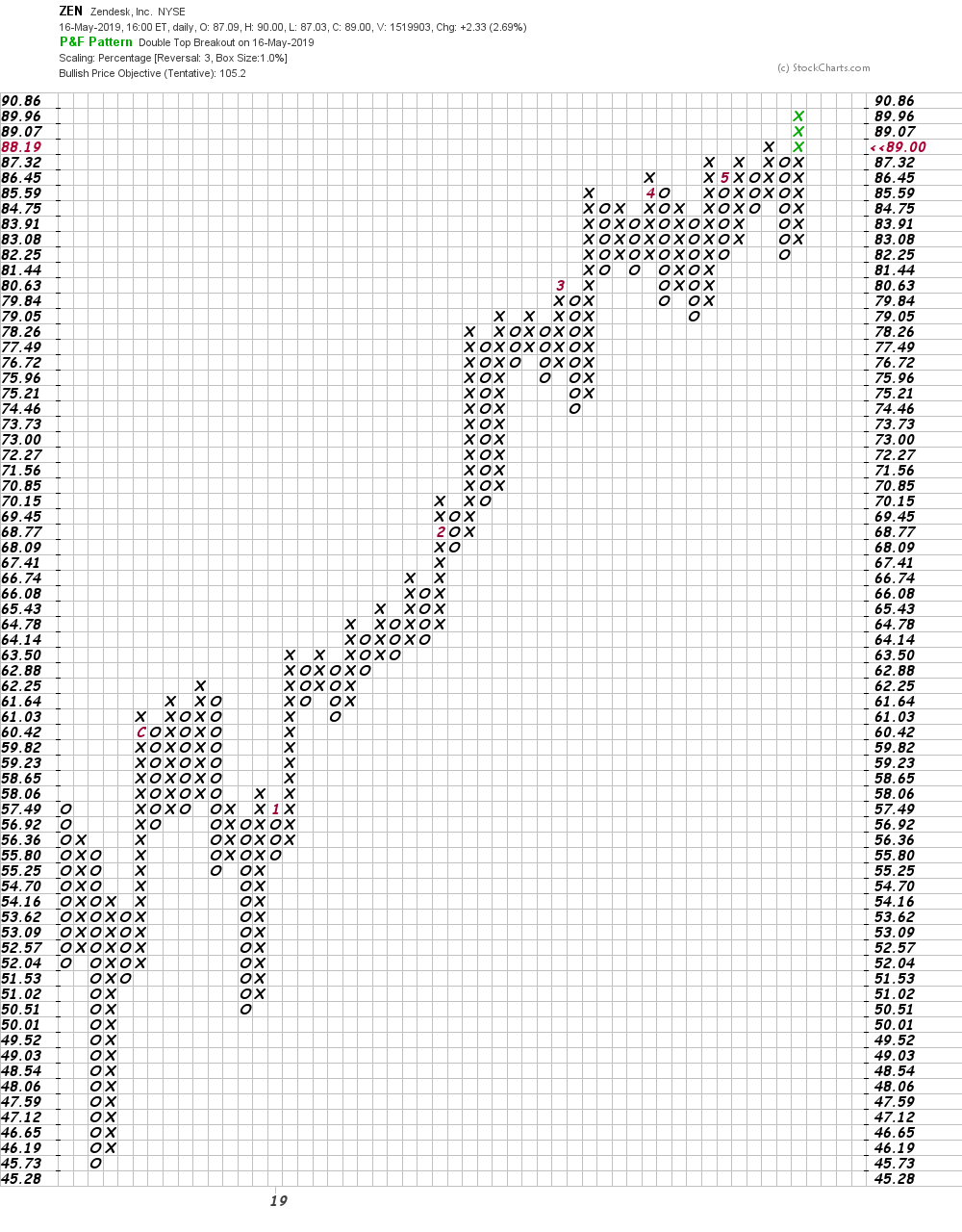 Bottom-line strategy: I like it when I can see bullish clues on all three charts. I like the charts of ZEN and traders can play ZEN from the long side risking below $80. The $100-$102 area is our first upside price target.

Get an email alert each time I write an article for Real Money. Click the "+Follow" next to my byline to this article.
TAGS: Investing | Stocks | Technical Analysis | Technology | Mad Money | Executive Interview

The CPI jumps an eye-popping 4.2%, but a lot of noise is included in that number.