Gustafsson explained that Zebra helps its customers digitize and automate their operations to increase efficiency and productivity. Zebra systems are deployed into retailers to facilitate omni-channel operations.

Zebra is also a dominant player in healthcare, Gustafsson explained, providing the tools and systems to help nurses reduce mistakes and provide better outcomes for patients.

The company is seeing big trends across all verticals, Gustafsson said, which is why it has expanded beyond just barcodes and scanners. The company now offers automation robots, machine vision systems and software-as-a-service solutions.

In our last technical review of ZBRA on May 5 we wrote that "The charts and indicators of ZBRA are touch and go right now. The picture is toppy but things could strengthen and the pattern could resolve itself into a continuation pattern. Prices need to hold their March lows. Be patient and wait."

In the daily bar chart of ZBRA, below, we can see that the shares did in fact hold above the March lows and continued higher. A correction in September and early October played out and prices tested and held the rising 200-day moving average line. Looks like a buying opportunity in hindsight.

Trading volume looks to be fairly active and the On-Balance-Volume (OBV) line has followed prices up and down. The trend-following Moving Average Convergence Divergence (MACD) oscillator is bullish but has narrowed in recent days and could cross to a take profit, sell signal.

In the weekly Japanese candlestick chart of ZBRA, below, we can see the advance of the past three years. The rising 40-week moving average line has been a good indicator to keep you in the longer-term trend. The recent candles look like spinning tops -- candles with small real bodies -- and this can represent a pause in the uptrend or it could be a shift in trend from up to side. We need to keep watching.

The OBV line has been strong and confirms the price strength. The MACD oscillator was in a correction mode from February but now is turning upwards again.

In this daily Point and Figure chart of ZBRA, below, we can see that the software is projecting a tentative price target in the $737 area. 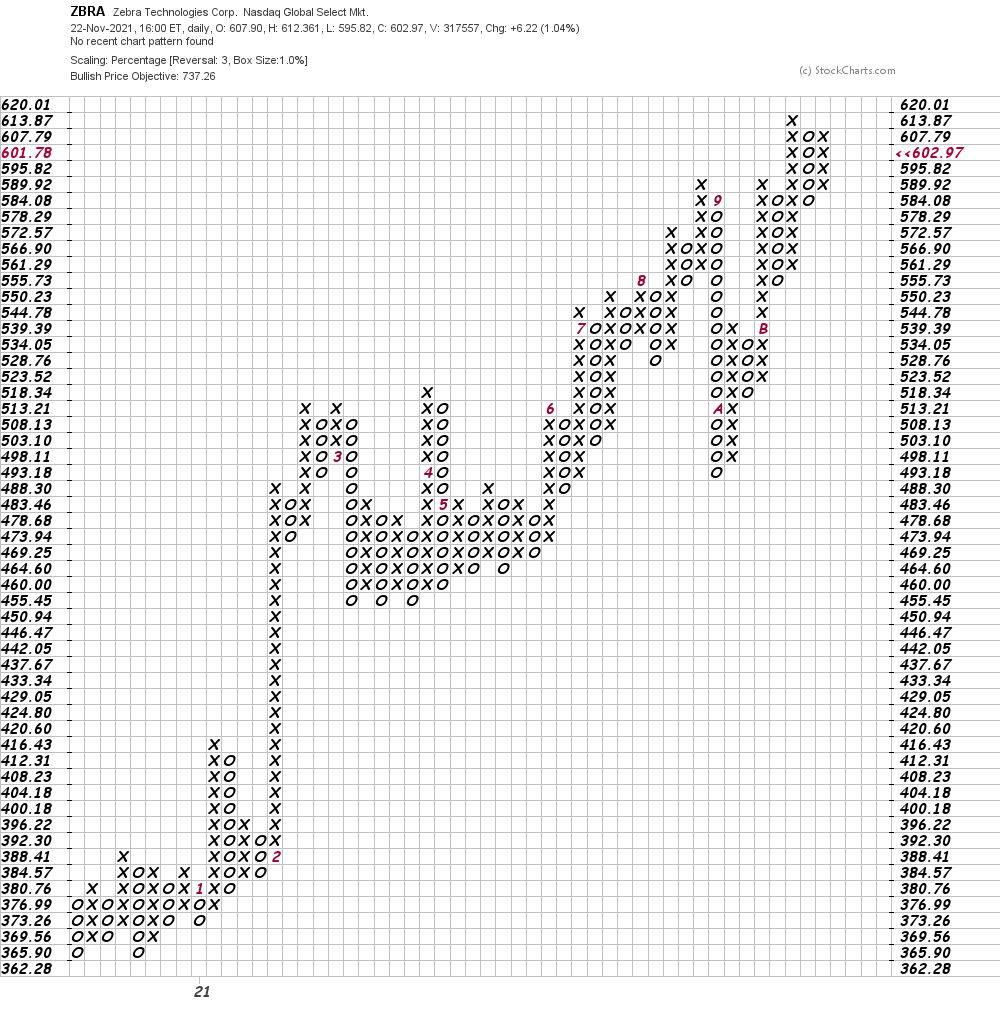 In this weekly Point and Figure chart of ZBRA, below, we can see a potential longer-term price target of $809.

Bottom-line strategy: Traders who may be long ZBRA should hold those positions but raise stops to $560. The Point and Figure charts are bullish but the recent spinning tops on the candlestick chart tell us to be on the alert for a possible shift in trend.

Get an email alert each time I write an article for Real Money. Click the "+Follow" next to my byline to this article.
TAGS: Investing | Stocks | Technical Analysis | Software & Services | Business Communications | Mad Money | Executive Interview

The Ohio-based bank saw its shares slide last Friday after it posted fourth-quarter results though it already was flashing a couple bearish signals.

There's no way to sugarcoat tightening policy into a weakening economy.

This Market Action Is Worse Than the Pandemic Selloff in 2020

The current environment is far more chaotic and uncertain than at the onset of COVID as neither the Fed nor Congress is riding to the rescue this time.