In addition to a big win with the U.S. Postal Service, Zebra is also growing its retail business.

Finally, when asked about their supply chain, Gustafsson said Zebra has moved about half of its supply chain outside of China and continues to diversify its operations.

In the updated daily bar chart of ZBRA, below, we can see that the stock made a new high for the move up Thursday and broke above the highs of December. ZBRA declined from January to middle of March as the broader market sank but prices quickly recovered and went on to make a new high. Prices are back above the rising 50-day moving average line as well as the bullish 200-day moving average line.

The trading volume histogram right below the price chart does not show us much but the daily On-Balance-Volume (OBV) line shows a decline from late December to late March, which told us that sellers were being more aggressive. The OBV line has not recovered its losses but it has been slowly improving the past two months.

The Moving Average Convergence Divergence (MACD) oscillator crossed above the zero line in late April for an outright buy signal. The MACD oscillator is still pointed up.

In the weekly bar chart of ZBRA, below, we can see an improving picture. Prices are at a new high for the move up and above the rising 40-week moving average line.

The weekly OBV line is still in a decline from April 2019 but it has turned up in the past few months. The MACD oscillator gave us a cover shorts buy signal last month and could soon cross the zero line for an outright buy message.

In this Point and Figure chart of ZBRA, below, we can see the breakout to a new high and the possible price target of $360. 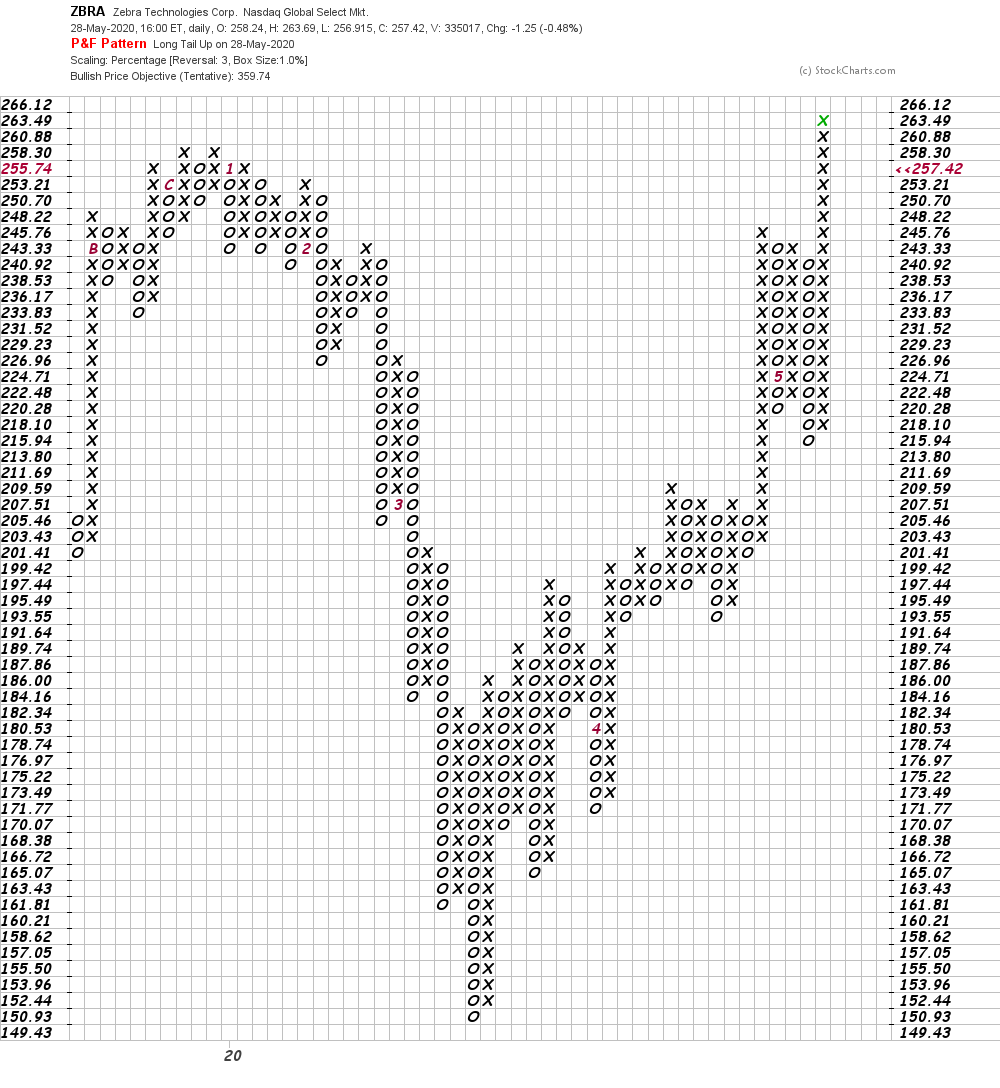 Bottom-line strategy: ZBRA might trade sideways a bit in the $260 area and that is probably a good location to go long or add to longs. Risk a close below $240 for now looking for gains to $300 and then the $360 area.

Get an email alert each time I write an article for Real Money. Click the "+Follow" next to my byline to this article.
TAGS: Investing | Stocks | Technical Analysis | Technology | Mad Money | Executive Interview | CEO Interview

My belief is that within this deep value pond, an active approach can outperform passive.

Charts remain constructive, but some of the psychology levels have intensified their warning signals.

Nano One Materials Is a Rare, Truly Innovative Company

It's patented One-Pot process allows for coating of the cathodes of lithium-ion batteries with a cobalt-free, nickel-rich substance.

What's Up With the SPAC Silver Spike Acquisition?

WM Holdings, a cloud software provider for the cannabis industry, will soon be coming public by a reverse merger with SSPK.