For the last several weeks, I have begun the week with the chart of the Citi Panic/Euphoria Model. The reason is that most folks continue to be surprised at how slow moving it is. They feel panicked and they do not understand how this model cannot share their views.

Perhaps if the wording were different, it would make more sense to folks. The market was plenty Euphoric in December, but this indicator did not cross over the line until mid-to-late January. It dipped and came back over the line in February. So think of it this way: Once it gets to that extreme it is telling us that maybe, just maybe, that's the point where the panic or euphoria is finally priced in.

You can see it now hovers just over the Panic line, so it is much closer than it has been. I suspect it gets there in the next few weeks. And that is the time factor I keep citing. I have some intermediate-term indicators that are not even oversold yet. I expect them to get that way in April, but only a few are there now.

Let's talk about the time factor again. I have discussed the chart of 2010 not because I think it's a great analogy, but because it shows us how long it took for the first bounce, even if the bounce was paltry -- it took five or six weeks from the market high before we had a real rally. I am excluding the two-day rally off that Flash Crash low, because it was only two days. The first rally that lasted longer than a few days arrived in early June and the market topped in late April.

Are there signs that we can finally get a rally that lasts longer than a day? Sure.

Friday saw the number of stocks making new lows contract to the lowest reading since early March. It was enough to make the 10-day moving average of the new lows tick lower for the first time. Will it last? We have no idea, but it is the first sign.

Friday saw New York Stock Exchange breadth at negative 385 vs. an S&P that was down 4%. Think about how many times we saw net breadth worse than that on days the S&P was up 1%. Was this because of the Russell 2000 rebalancing? Possibly. But I do not like to rationalize an indicator. For one day, this was a sign the selling in many stocks abated.

The McClellan Summation Index, which tells us what the majority of stocks are doing, is still heading down as it has been since mid-January. As of Monday morning, it needs a net differential of positive 2,300 advancers minus decliners on the New York Stock Exchange to halt the decline (more to get it to turn up). A few weeks ago it needed positive 7,000. But consider that if we were able to get two up days in a row, something that has been unachievable thus far, this indicator might finally halt the decline.

On the sentiment front, some indicators are finally showing some extremes or at least getting closer. The Consensus Bulls are now at 31. They ticked over 70 in early February. This indicator got to 19 at the March 2009 low, but that's quite a shift in sentiment. 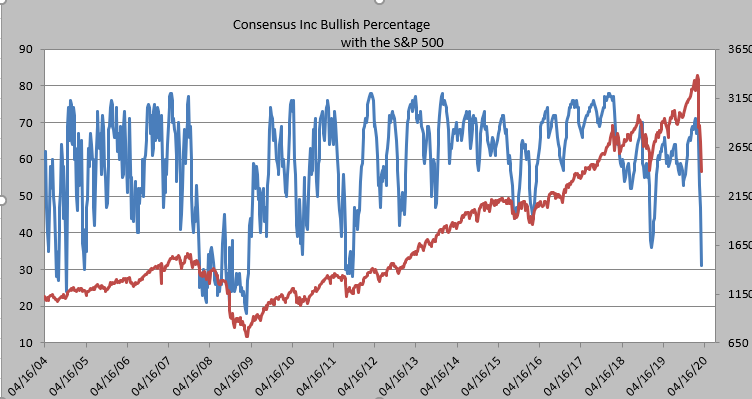 The put/call ratios are high; their moving averages are high, too. The Daily Sentiment Indicator (DSI) is back at 5 for both Nasdaq and the S&P, but this is literally a daily read, not an intermediate-term one. I expect it's possible we finally see more bears than bulls in the Investor's Intelligence survey this coming week (it is released midweek), something we have not seen yet.

Credit remains a problem as the selling there has not abated at all.

In any event, we still need to get an initial rally just to begin the process. Then there will be months ahead of ups and downs, with lower lows, before we can see higher lows in any of these indicators that show divergences. That's how the process works. We can't change it.