By TIMOTHY COLLINS Jun 03, 2020 | 01:00 PM EDT
Stocks quotes in this article: WFC
If you want to look short, get short, or even stop believing in this rally, then you need to watch for a change in character.
Growth continues to trump value week after week. Sure, we've had a solitary day of rotation here and there. That's normal. It's going to happen. Ironically, sometimes it is growth folks looking for a quick swing trade in a tightly coiled or underperforming stock. Almost like, "hey, folks, look what I found over here!" Everyone goes running. Gets bored quickly, and returns to what they were doing before.
I am keeping an eye on banks. James "Rev Shark" DePorre tweeted a few of my same thoughts this morning. While I hate it when people get inside my head, I am never bothered when I see Rev Shark on the same page. I know the bank exchange-traded fund is an easy watch, but I have my eyes on Wells Fargo ( WFC) . The reason? This has been one of the biggest dogs in the group. It also is the name with the most fleas over the past few years.
The daily on WFC, banks, and the market in general are extended. That momentum train has left the station. If you're trading on logic or traditional valuation or both, you're likely not finding much in this environment. In terms of underperforming names like Wells Fargo, I believe a look at the weekly charts is our best play.
For WFC, a three week uptrend has put the May bottom in the rear-view mirror. Rising support around $26.50 is where we began the week and that should be your stop level. If using options, then something in the defined risk with a $27 or even $28 handle actually sets up well here. The stock could rise as high as $31 by next week based on the current resistance. Not how the 10-week simple moving average (SMA) aligns well with support. Resistance in the form of the 21-week SMA doesn't come until we hit that March gap. While I'm looking at $31 as possible resistance, it may not come into play until we hit $32. 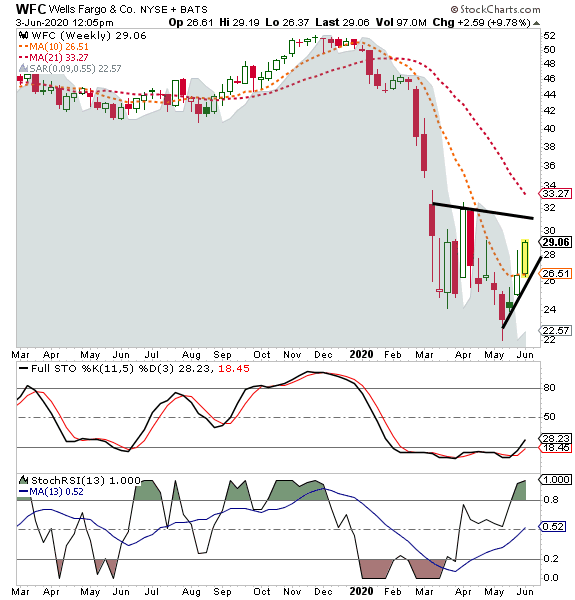 WFC offers a bullish crossover coming out of oversold territory in the Full Stochastics. This is one of my favorite technical setups, especially after the initial April crossover produced a pop that failed at resistance. The second crossovers are often stronger and the failure of the first crossover provides us an initial upside target.
I don't think this bullish bounce in the overall market will fail until we see a big push in the banks like WFC. It may see like the move from the May lows to the current price is a big push, but WFC remains nearly 50% off the 2019 highs. I'm beginning to believe the overall market rally doesn't fail until we see banks, specifically WFC, 5% to 7% higher, if not 10%. I think the latter is overly optimistic, but I have to keep it in consideration, before I get more confident looking for downside.
Is it logical?
Nope.
But little about this market is logical. Just play what's in front of you.
Get an email alert each time I write an article for Real Money. Click the "+Follow" next to my byline to this article.
TAGS: Investment Banking | ETFs | Investing | Options | Stocks | Banking | Financial Services