By TIMOTHY COLLINS Nov 21, 2019 | 12:07 PM EST
Stocks quotes in this article: M, T, WMT
Everything the big box retailers like Target ( T) and Walmart ( WMT) try to give the retail sector, the traditional brick-and-mortar and mall rats take away. Mall anchors have become more like boat anchors dragging the retail sector into the bearish abyss.
Macy's ( M) reported earnings on Thursday morning of 7 cents per share on revenue of $5.17 billion vs. estimates of a flat quarter on $5.32 billion in sales. Comp sales declined by 3.5%, worse than the 1% projected, but hardly a surprise given it seems the whole world expected disappointment. Overall, these numbers aren't half-bad. The outlook, on the other hand, painted a picture of management lost.
Macy's projected full-year earnings per share in the range of $2.57 to $2.77. Prior guidance for the full-year was $2.85 to $3.05, and this number had already been guided lower previously. That equates to an expected disappointed of between 8 cents and 48 cents for Q4; however, once we adjust for the 7 cent beat reported Thursday morning, that range increases to 15 cents to 55 cents. That's ugly for a holiday quarter. Simply using midpoints, those numbers give us a guide down of 35 cents from management.
Ironically, Wall Street had a better bottom line picture than the company itself. Analysts had the full-year pegged at $2.79. With a new full-year EPS midpoint at $2.67 and adjusting for the 7-cent beat, the Q4 guidance implies a 19 cent downside for Q4 against analysts' numbers. While that plays out better than the 35-cent disappointment if we listened to management's continued guidance, it's still brutal.
From a valuation standpoint, bulls are pointing to the real estate worth, along with a price to sales under 20 cents and a price-to-earnings, or P/E, of 5. The problem I see is no growth, management that has lost touch, shrinking asset values, net income driven by asset sales, and no competitive advantage. There is virtually no moat to selling apparel. Niche retailers, online retailers, and online personalized service (I know that sounds like an oxymoron) have taken over the industry. Macy's has been slower to adapt to online, although it has gotten into the game, but its focus has been on revamping stores, Backstage, selling assets, and closing stores. In fact, their net income only achieved green, thanks to $17 million in asset sale gains in Q3. For Q4, asset sale gains were the only guide higher from management.
In terms of the stock action, Macy's has struggled for 18 months post-earnings. The previous five reports saw the stock lower by an average of 11% 13-days post-earnings and 10% 21-days post-earnings. Bulls may be spared a little post-earnings pain given the big drop into earnings. Macy's is lower by about 13% this week, so that falls in line with recent averages. Maybe the bleeding will stop? 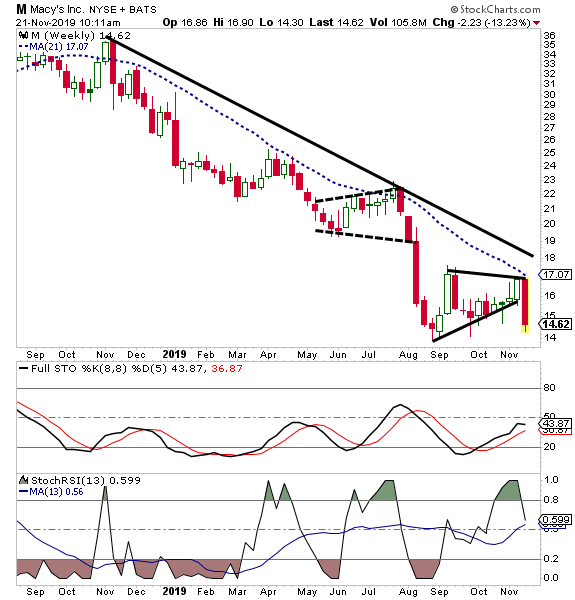 It's a question we can only guess at answering. Any close below $16 gives the bears more power on a technical level. Resistance existed at $17, and we'll add another layer at $16. A close below that level triggers a break of support on the ascending triangle. The August-September lows are what to watch now. To make it easy, I would key on $14, $16, and $17. Below $14, and I believe you have to be out. Above $16, and it gets interesting again. Over $17 and we should have some momentum come into the stock to take us to $20. It should make for a great scalping/trading name, but I struggle to see the upside in ownership. There's a lot of other names to choose from in the market without the struggles of Macy's and without management that appears to be out of touch with its own company.
Get an email alert each time I write an article for Real Money. Click the "+Follow" next to my byline to this article.
TAGS: Investing | Options | Stocks | Stock of the Day