The market is awful, isn't it? I am going to call this market the "Serena Williams market." Even if you are not a tennis fan, surely you know who Serena is.

Think of her great career as a bull market: All she did was win. Then she spent a year or two where she made it to the finals of several grand slam tournaments, but she never seemed to win those tournaments. Think of that as the topping out period (fewer new highs).

Her career was already in decline -- her equivalent of a bear market -- when she announced in August that she would retire. She played a few tournaments and could barely get past the first round (think of a market that keeps stumbling and going down).

Then, she entered the U.S. Open with such low expectations from everyone. But she won. And for the first week, she kept on winning right until the third round. It was enough to get folks excited, but ... in the end ... it was simply a bear market rally.

(I chatted about the "Serena Market" and other topics such as that line on the S&P 500 chart with TD Ameritrade on Thursday, click the lint to see it youtube.com/watch?v=91MiHzWDIjQ)

Now, let's talk about the indicators.

My Oscillator is just about oversold. I have it pegged for mid next week. But with one week from today being the end of the quarter, I would not be surprised if we rallied earlier or later. Let's just note we're into the time frame. You can see how much the Oscillator has come down this week.

We've already discussed the 30-day moving average of the advance/decline line. That, too, is slated to get oversold midweek next week so it can go lower than it is but look where it is now. Recall a week ago it was at the zero line, so now it is finally heading into oversold territory.

The Volume Indicator is at 44%. I think no matter what the market does in the next few days it is likely it gets down to 42% at the very least. That too is oversold. Even in bear markets, the worst it has ever gone down is 38%-39%.

The McClellan Summation Index is still heading down (bearish), but it will now take a net differential of positive 5,100 advancers minus decliners on the New York Stock Exchange to halt the decline. A few weeks ago just after Labor Day, just prior to that 5% rally, this was at 5,300. Sure it can go higher, but the point is that it is getting there now, too. 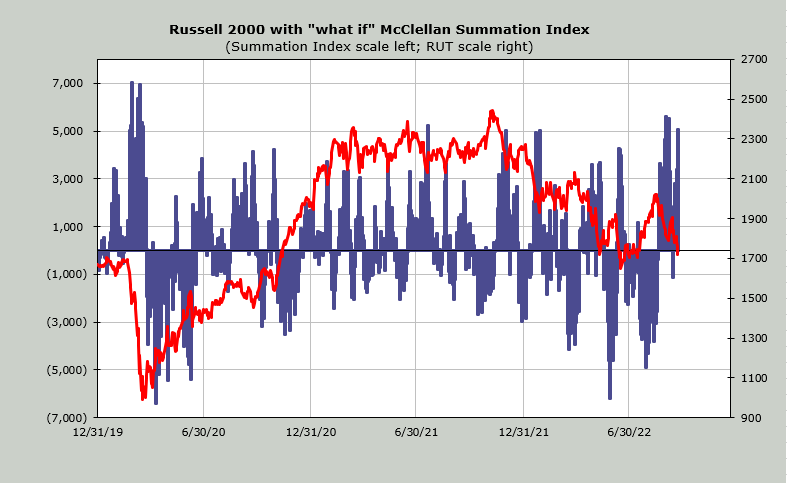 The Nasdaq Momentum Indicator, which is based on price, not breadth, is also oversold. Here I walk Nasdaq down nearly 800 points in the next week or so to see when the indicator stops going down and heads up. That day is Monday. That is the definition of oversold. 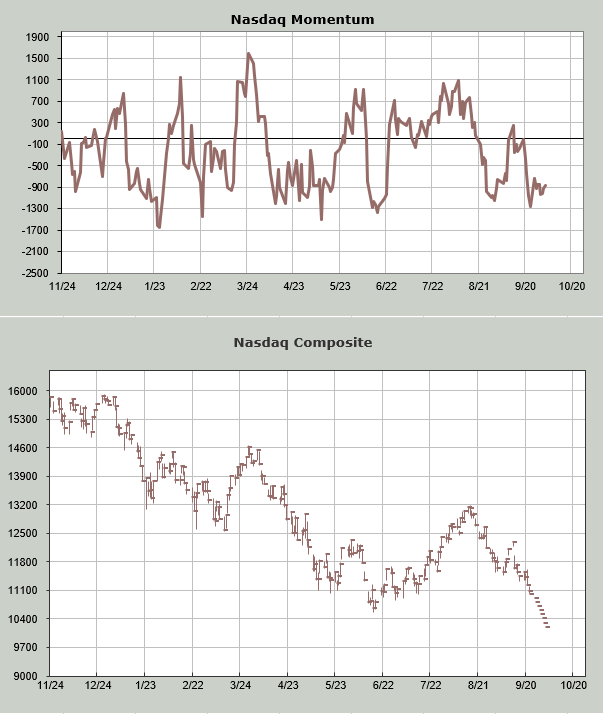 Sentiment, as we know, is bearish. The American Association of Individual Investor bears are now over 60%, which everyone is fussing over.

In addition the currencies are all at single digits and the Dollar Index is at 93. This tells me we're getting to an extreme. This is why I think we should rally in early October.