By STEPHEN GUILFOYLE Jul 10, 2019 | 12:16 PM EDT
Stocks quotes in this article: LEVI, KTB, WMT, TGT, KSS
Always thought of myself as kinda cool, back in the day. Still do, in a way. Levi Strauss ( LEVI) was always part of that. The jackets. The jeans. Always.
In fact, I consider myself something of a Levi's loyalist. Until just now, as I sit in my office, writing a piece on Levi Strauss earnings, and I instinctively look down at my trousers.
Wrangler? Wow. When did that happen?
Wrangler is a subsidiary of Kontoor Brands ( KTB) , as is Lee, another Levi's competitor. I know when it happened. I ripped my pants a ways back, and the Wrangler jeans were cheaper. It was that simple. Perhaps for the entire apparel industry, it is that simple.

Levi Strauss reported second-quarter earnings per share of 7 cents on revenue of $1.31 billion. Sales were good enough for year-over-year growth of 4.8%, but both the top- and bottom-lines missed expectations rather badly.
Oddly, I thought, the firm placed much of the blame for declining quarterly profits on expenses related to its initial public offering. I would expect that the analyst community might have had a handle on that kind of expense, meaning that it should have been priced in. Others have mentioned that the IPO, having occurred on March 21, should have seen expenses recognized in the first quarter. The firm's fiscal first quarter ended in February, so I don't really see that point.
While these results show revenue growth across all regions, CEO Chip Bergh seemed downbeat on both the retail landscape and the underlying macro-economic environment. The firm expects the second half to moderate from the first, in terms of sales growth.
One item that I did notice was that the firm opened 78 stores over the 12 months ended May 19, and plans to end the fiscal year with 100 new stores, which would put the firm's capital spend in a range of $190 million to $200 million. I do like the aggression. If direct-to-consumer sales grew 9%, largely due to execution across the firm's company-owned-and-operated network of locations in addition to e-commerce, then there will be less of a reliance upon that already mentioned, and sometimes less-reliable retail landscape. While, I would think that it might still be desirable to place product at stand-alone shops, such as Walmart ( WMT) , Target ( TGT) , or Kohl's ( KSS) , the benefits of the mall have largely dissipated over time. I am not at all sure I like the aggression enough to put my money here. 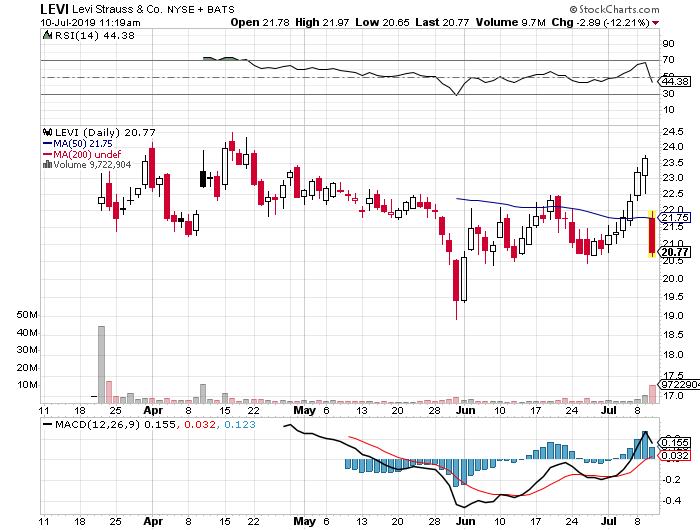 I think the obvious takeaway here is the run up into these earnings. Clearly enough investors were caught off guard. The entire life of the issue amounts to a base of consolidation in response to the public offering. That range remains unbroken.
What the long crowd needs to watch for now, would be the potential for the 50-day simple moving average -- now a dollar above the last sale -- to develop into resistance. I might buy some shares, but only should the shares test the all-time low. There is no dividend, which would be a positive catalyst for engagement.
I did notice that October (post-third-quarter earnings) $22 calls are wildly active today. This might be a crowded trade, but those interested might grab those for about $1.15 if this is a name that you believe in. Such a trader might finance the majority of this outlay through a sale of October $19 puts, currently worth about 90 cents, and also a little more active than one might think. Not my cup of tea, but that's how I would do it, if it were.
KSS is a holding in Jim Cramer's Action Alerts PLUS member club .
Get an email alert each time I write an article for Real Money. Click the "+Follow" next to my byline to this article.
TAGS: IPOs | Earnings | Investing | Stocks | Apparel | Stock of the Day