By STEPHEN GUILFOYLE Mar 10, 2020 | 12:17 PM EDT
Stocks quotes in this article: KO, PEP
Did you see Jim Cramer's piece this morning? Yes? Super. No? You probably need to. Jim is profiling all 30 Dow stocks, and going out on a limb (as he always does), stating brief opinion on each and every one of them for this environment in terms of attractiveness. This morning's missive, as the first edition of three covers 10 names. One happens to be a name I've been thinking of without taking action, so I'll consider it publicly. That's Coca-Cola ( KO) . Read along if you will, as I figure this out for myself, as we all must honestly do.
Directly from Jim's note on Coca-Cola: " This one's a buy, plain and simple. The stock's been slammed by the futures even after a terrific quarter. I think investors will flock to Coca Cola as a safe haven because its a classic defensive stock that does just fine in a slow down. Right now its at $52 -- If you can get it for less than $50 that's a gift."
Funny thing. Talked to my Dad over the weekend. For those of you who remember the Colonel, the man remains one of the most intelligent people, and most talented traders, I have ever met. This is the guy who helped me set up my own trading account with my paper boy money at age 13, so he's a player in this game. My Dad liked Coke over the weekend, and has a high opinion of CEO James Quincy, as do I. As for Jim Cramer, he is the only person I have ever met that can tell you something that you did not know about any publicly traded company upon request. The " Lightning Round" is not just a segment on television. He can really do that. I have tried to "get him."

A Place in the Portfolio Next to Pepsi?

Considering my book, I already have a full exposure to Pepsico ( PEP) . Pepsi, in turn, offers exposure to the wonderful world of salty snacks and is wonderfully consistent in terms of performance. With an annual dividend of $3.82, at Monday's awful closing prices, PEP yields 2.9%. KO pays $1.64 annually, or just less than 3.2%, so Coca-Cola is the better dividend name, but not significantly enough to make or break a decision in either direction.
Let's go back to Coca-Cola's fourth quarter. The firm beat EPS expectations when GAAP standards are applied. The firm also beat consensus for revenue on growth of 16% on the back of robust growth in organics in Latin America. The firm even lifted full-year 2020 EPS expectations above what Wall Street was looking for. The dividend was also increased to current levels at that time. Coca-Cola was back. Maybe.
As recently as Feb. 21, Coca-Cola estimated a two-to-three point impact to unit case volume due to impacts from the spreading coronavirus. But the firm also stood by the full-year guidance that had been put forth at the earnings call. That said, the firm has acknowledged (in the annual report) that its supplies of artificial sweetener (sourced from China) had been disrupted, and those supplies could dwindle as the outbreak worsened. Diet Coke, even in decline, remains a revenue driver, as does Coca-Cola Zero Sugar, which is growing at a double digit pace. In addition, on the consumer side, China has been the firm's third largest national market in terms of unit case volume. Europe is important as an entity as well, though I don't find any Italy-specific data.

As a staple that pays a sustainable dividend, Coca-Cola is certainly more attractive in uncertain times. As a large cap multi-national, the firm is exposed to breakdowns in supply chains, as well as scattered breakdowns in consumer demand. I do think Coke can belong in any portfolio, even if the shares have become suddenly more volatile than any long time shareholder is probably comfortable with. Like, Jim Cramer, I intend to be choosy in placing entry, and that entry will be done incrementally if it gets off the ground. If I miss it? C'est la vie. 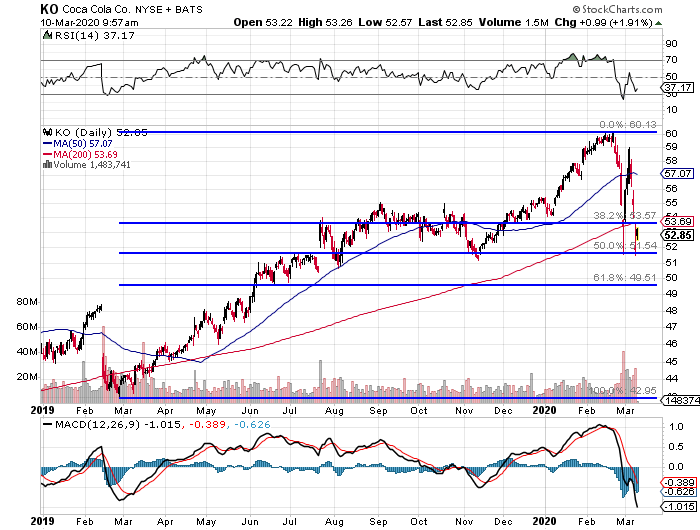 Obviously, both relative strength and money flow are on the ropes. When all other models fail to tell us anything, we often turn to Fibonacci levels, and this name has found support during the Covid-19 era. That support showed up almost precisely at a 50% retracement of the stock's entire 2019 through early 2020 range.
That tells me to consider placing entry exposure of 1/8 of my intended position size at $51.50. I get hit there, and my interest drops down below Jim's $50 mark.
Right now: a trader can get paid 85 cents for a $51.50 put that will expire this Friday. Should the trader get tagged on that put, net basis for the shares purchased would come to $50.65. The same trader could probably also write April 17 $50 puts for $1.75 a piece. Just an idea. Might shave cost of entry.
(PEP is a holding in Jim Cramer's Action Alerts PLUS member club. Want to be alerted before Jim Cramer buys or sells it? Learn more now.)
Get an email alert each time I write an article for Real Money. Click the "+Follow" next to my byline to this article.
TAGS: Investing | Stocks | Food & Staples Retail | Consumer Staples | China | Stock of the Day