Dr. Kinney said when proteins are formed in the body, they fold themselves into certain shapes based on the job they need to do. But sometimes, proteins mis-fold themselves and accumulate in the body. This accumulation is what causes diseases such as Parkinson's and Alzheimer's.

Prothena's therapies can target these proteins and help the body identify and remove them. So far, its treatment for Amyloidosis, which is in Phase III trials, is showing promising results, he said.

Kinney said Prothena remains focused on providing positive outcomes and it has great collaborators, such as Bristol-Myers Squibb (BMY) .

Let's check and see how the charts of Prothena are developing.

In this daily bar chart of PRTA, below, we can see that PRTA made a base pattern around $10 before the impressive rally that started in February. Prices rallied strongly and are still pointed higher. PRTA is trading above the rising 50-day moving average line as well as the bullish 200-day line. The trading volume has been increasing with the rally and that is a positive. The math-driven On-Balance-Volume (OBV) line shows a rise from late January and tells us that buyers of PRTA are more aggressive, with heavier trading volume on days when PRTA has closed higher. The Moving Average Convergence Divergence (MACD) oscillator is in a bullish alignment.

In this weekly Japanese candlestick chart of PRTA, below, we can see that prices made a large base from 2018. Prices are in an uptrend as they trade above the rising 40-week moving average line. The weekly OBV line is positive and bullish. The MACD oscillator is bullish as it continues to rise above the zero line.

In this daily Point and Figure chart of PRTA, below, we can see an upside price target in the $71 area.

In this weekly Point and Figure chart of PRTA, below, we used close-only price data. A higher price target is not shown but a trade at $68 should refresh the uptrend. 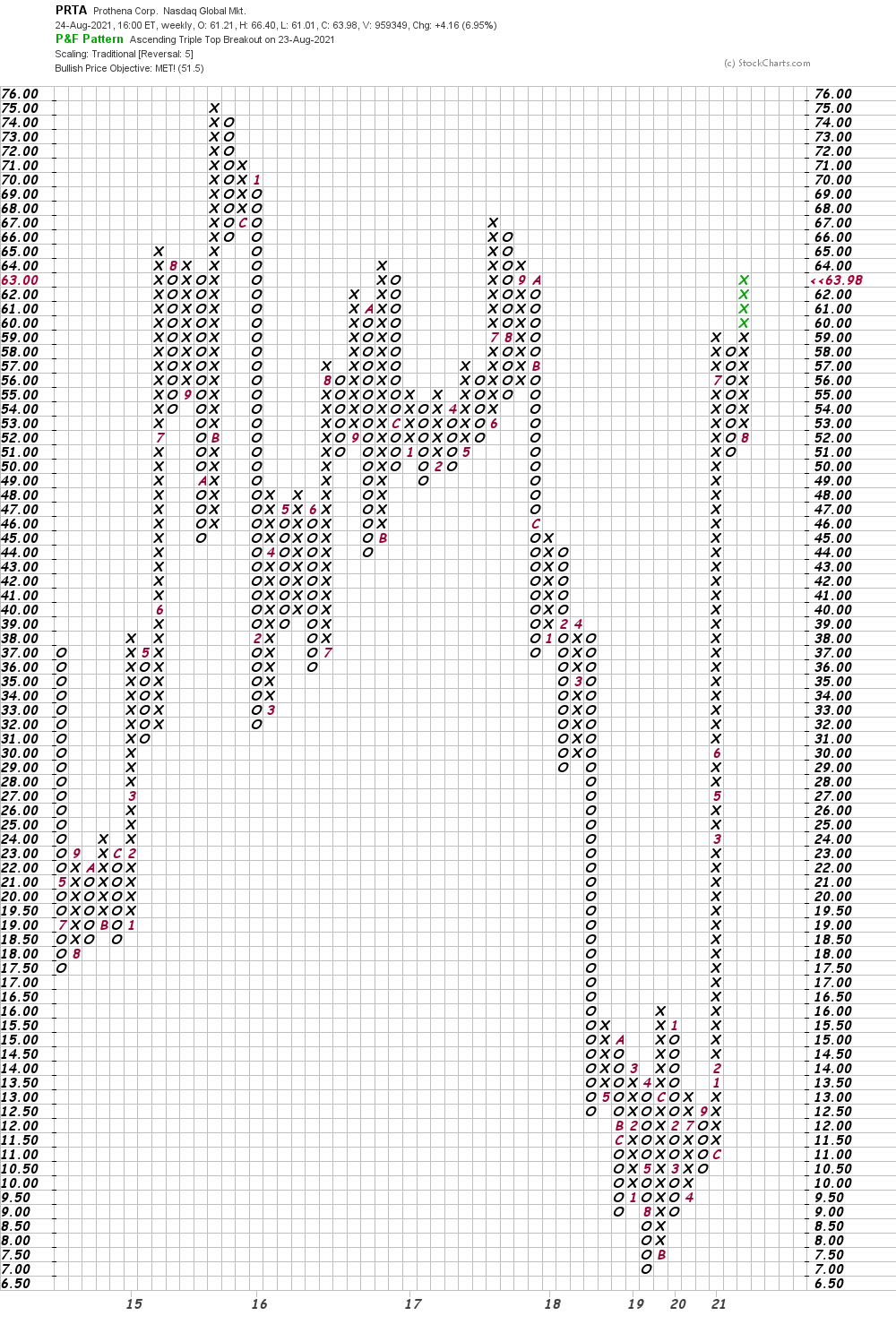 Bottom line strategy: Traders could look to buy a pullback to or just under $60, risking below $53 for now

Get an email alert each time I write an article for Real Money. Click the "+Follow" next to my byline to this article.
TAGS: Drug Approvals | Investing | Stocks | Technical Analysis | Biotechnology | Pharmaceuticals | Mad Money | Executive Interview | Real Money