During Wednesday's Mad Money program Jim Cramer noted that a number stocks recently had strong gains which came at the expense of the high-growth cloud stocks, with names such as Workday Inc. (WDAY) plunging 20% in recent days as investors re-evaluated these once hot stocks.

Let's check out the charts of WDAY to see if there is more pain ahead for investors.

Earlier in October prices bounced up toward the underside of the 200-day line but quickly failed and gapped lower. WDAY has made a new low for the move down but it is now digging into old resistance from December which should reverse roles and act as new support.

Trading volume was very heavy in recent days suggesting that there may have been a change of ownership from weak hands to stronger hands. The daily On-Balance-Volume (OBV) line has turned lower but does not appear to have made a new low for the move down. This could become a bullish divergence.

The Moving Average Convergence Divergence (MACD) was close to crossing the zero line from below but the recent price weakness has thwarted that signal. WDAY is trading above its low Thursday and it is several hours until the close so a recovery is possible.

In the weekly candlestick chart of WDAY, below, we can see the large red (bearish) candle representing the latest price action. If you look toward the middle of the chart you can see that the $150 area provided resistance on the rally and it should act as support on this decline. Prices are below the 40-week moving average line but the slope of the line is still positive.

The weekly OBV line shows weakness in July and August but subsequent stability. The MACD oscillator is below the zero line in sell territory but the two averages that make up this indicator have begun to narrow.

In this Point and Figure chart of WDAY, below, we can see a bearish downside price target and no new accumulation. WDAY has its work cut out for itself. 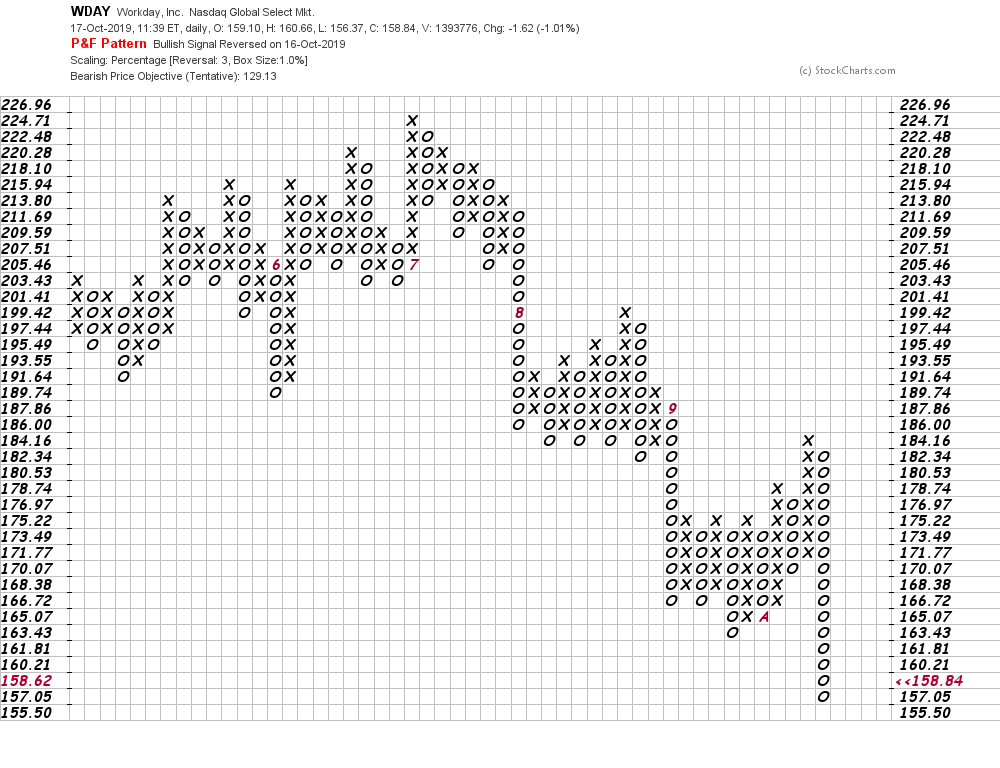 Bottom-line strategy: I am not in favor of fighting the trend nor buying into weakness. However, because I think the broader market will rally into year-end I do not want to be bearish on many stocks. WDAY is in a downtrend but chart support and a reversal could change that quickly.

Get an email alert each time I write an article for Real Money. Click the "+Follow" next to my byline to this article.
TAGS: Investing | Stocks | Technical Analysis | Technology | Mad Money