By TIMOTHY COLLINS Sep 23, 2021 | 02:15 PM EDT
Stocks quotes in this article: QTRX
Every once in a while, I find a chart I really like, but then I check out the options market and my face looks like I bit into a lemon.
That's the case with Quanterix Corp ( QTRX) . Both the daily and weekly chart are fantastic, but the options market has spreads 25% to 50% wide between the bid and the ask. That's simply unworkable.
QTRX is getting a solid bump Thursday, as Cowen reiterated an Outperform rating and touted the company as a focus name for the last quarter of the year. The analyst pointed out the range-bound trading, which we'll examine here, and that the company's growth drivers remain in place. Additionally, the market underappreciates Quanterix's potential role in neuro clinical diagnostics. The company does have emergency-use authorization for its COVID antigen test, as well, which remains as a forefront of public health concerns.
On the daily side, the stock is reacting well to the analyst note Thursday. Shares are trading well above the 50-day simple moving average (SMA) for the first time since July. In fact, it has struggled with the 21-day SMA for nearly two months, as well. The open Thursday pushed us above both moving averages. I suspect we'll close above both of them, as well. This also pushes the stock above the biggest areas of resistance. The next resistance on the daily comes in around $58. 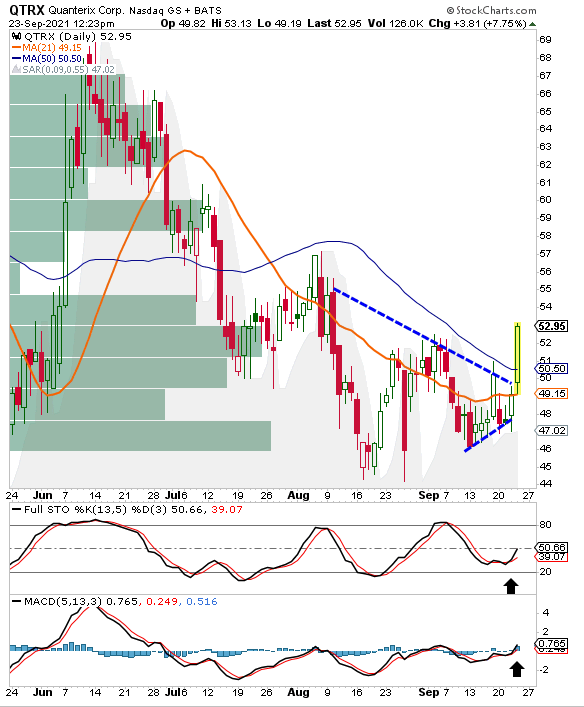 In addition to the price movement, we have bullish triggers in both the MACD and Full Stochastics crossing bullish now. They are following the parabolic stop-and-reverse (PSAR) from the other day. PSAR alone hasn't been strong as a standalone indicator, so seeing everything else bullish is a big plus.
Flipping over to the weekly side, QTRX is pushing a big resistance level. The stock has the potential to close above the 21-week SMA Friday. That would be huge. The rising support trendline offers a clear stop or hedging position. If options were better, it would be a great place to position a put.
Resistance on the weekly sits well above the daily, making the longer-term view even more appealing here. And this also has the triggers in the three secondary indicators I follow: Full Stochastics, StochRSI, and PSAR. 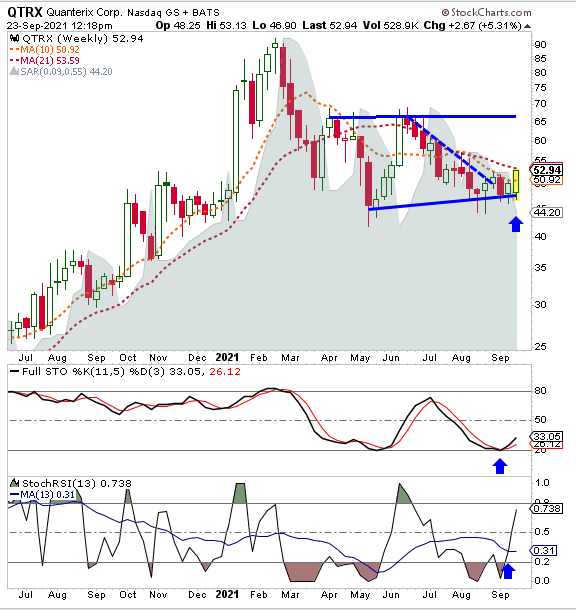 My view is to watch this into Friday. If we can close above $53.50, then this becomes an end-of-the-week buy. If not, then I'll keep it at the top of list and look for a breakout to start the week next week.
Get an email alert each time I write an article for Real Money. Click the "+Follow" next to my byline to this article.
TAGS: Investing | Options | Stocks | Coronavirus