Oracle Corp. (ORCL) is expected to open higher here on Tuesday in reaction to its second-quarter earnings beat and solid guidance. I will leave the fundamental number-crunching to someone else and will focus on the charts and indicators of the cloud computing giant.

In this daily bar chart of ORCL, below, we can see a broad sideways trading range for ORCL the past 12 months. Prices held up well in October when the broad market skidded to the downside and firmed in November. Only in the past two weeks has ORCL broken its November and October lows. Only in December has ORCL stayed below its declining 200-day moving average line and the bearish 50-day line.

The daily On-Balance-Volume (OBV) line only rolled over slightly from late November, suggesting that ORCL declined more from its own weight than from aggressive selling. In the bottom panel is the Moving Average Convergence Divergence (MACD) oscillator, which is below the zero line in bearish territory. However, it has begun to narrow toward a crossover and cover-shorts buy signal on this shorter time frame.

In this weekly bar chart of ORCL, below, we can see a rally from January 2016 to February 2018 followed by a sideways market. Prices have been crossing above and below the 40-week moving average line all year. Recently the slope of the 40-week line turned bearish. The weekly OBV line jumps around but generally moves up and down with the price action. Since September the OBV line has moved up even as prices have declined, which suggests buying on weakness. The weekly MACD oscillator is just now crossing the zero line, so new price strength could turn it up again.

In this Point and Figure chart, below, we see some mixed information. The chart shows a potential downside price target of $42.26 and also shows what looks to be good support from the volume-at-price bars on the left scale. A rally to $48.54 will strengthen the chart. 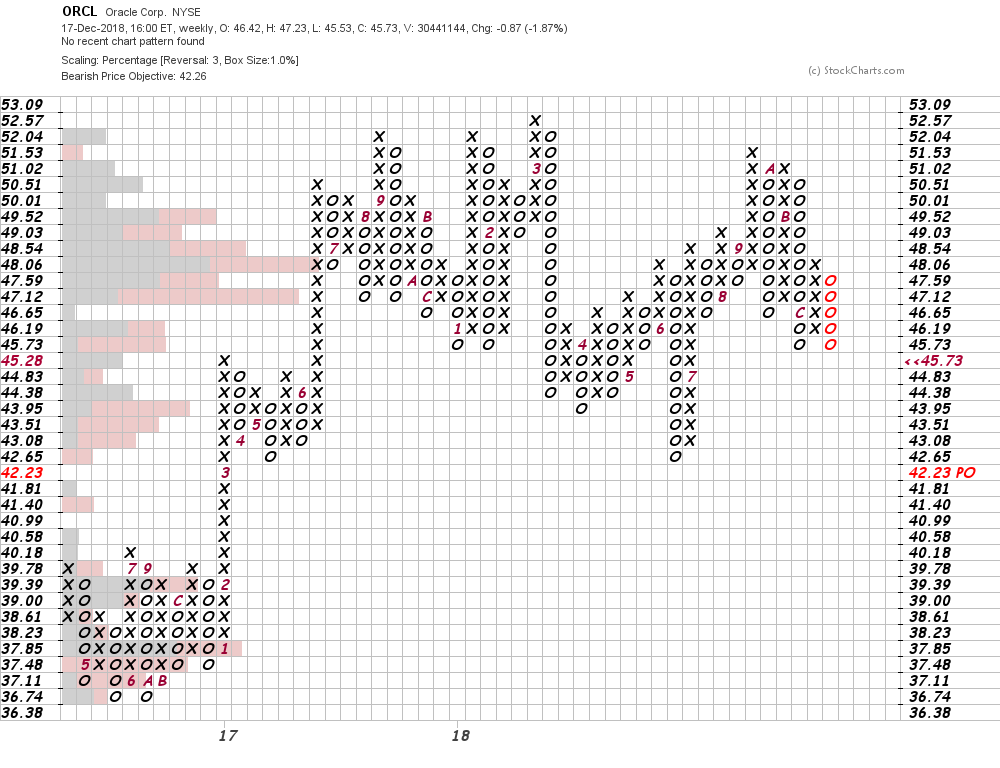 Bottom line strategy: Closes that are back above the 50- and 200-day moving averages will help, and a rally to $48.54 will improve the Point and Figure chart. Fingers crossed we get that here on Tuesday.

Get an email alert each time I write an article for Real Money. Click the "+Follow" next to my byline to this article.
TAGS: Investing | Stocks | Technical Analysis | Software & Services | Technology | Real Money | Stock of the Day