During Monday's Mad Money Lightning Round segment one caller asked Jim Cramer about Domino's Pizza Inc. (DPZ) . "I think Domino's is very good and I think it's going to keep on winning," responded Cramer.

In our last review of DPZ on Oct. 9 we concluded that, "The decline in DPZ may turn out to be a one-day reaction. I will be watching the price action of DPZ closely on Friday. Meanwhile, continue to risk a close below $390 for longs." Prices closed below $390 in late October so traders should be flat.

In the updated daily bar chart of DPZ, below, we can see that the shares have been trading sideways in recent weeks between the declining 50-day moving average line and just above the rising 200-day moving average line. The On-Balance-Volume (OBV) line has been declining since early October telling us that sellers of DPZ have been more aggressive.

The Moving Average Convergence Divergence (MACD) moved below the zero line in mid-October for a sell signal. The oscillator is still bearish.

In the weekly bar chart of DPZ, below, we can see some worrisome technical clues. The shares are trading just above the cresting 40-week moving average line. The weekly OBV line did not make a new high in September when prices did and it has been in a decline the past three months telling us that sellers of DPZ have been more aggressive.

The MACD oscillator is pointed down toward the zero line.

In this Point and Figure chart of DPZ, below, we can see a potential downside price target in the $335 area. The software is recognizing that the recent price action looks like distribution (selling) and it is projecting the sideways price action lower. 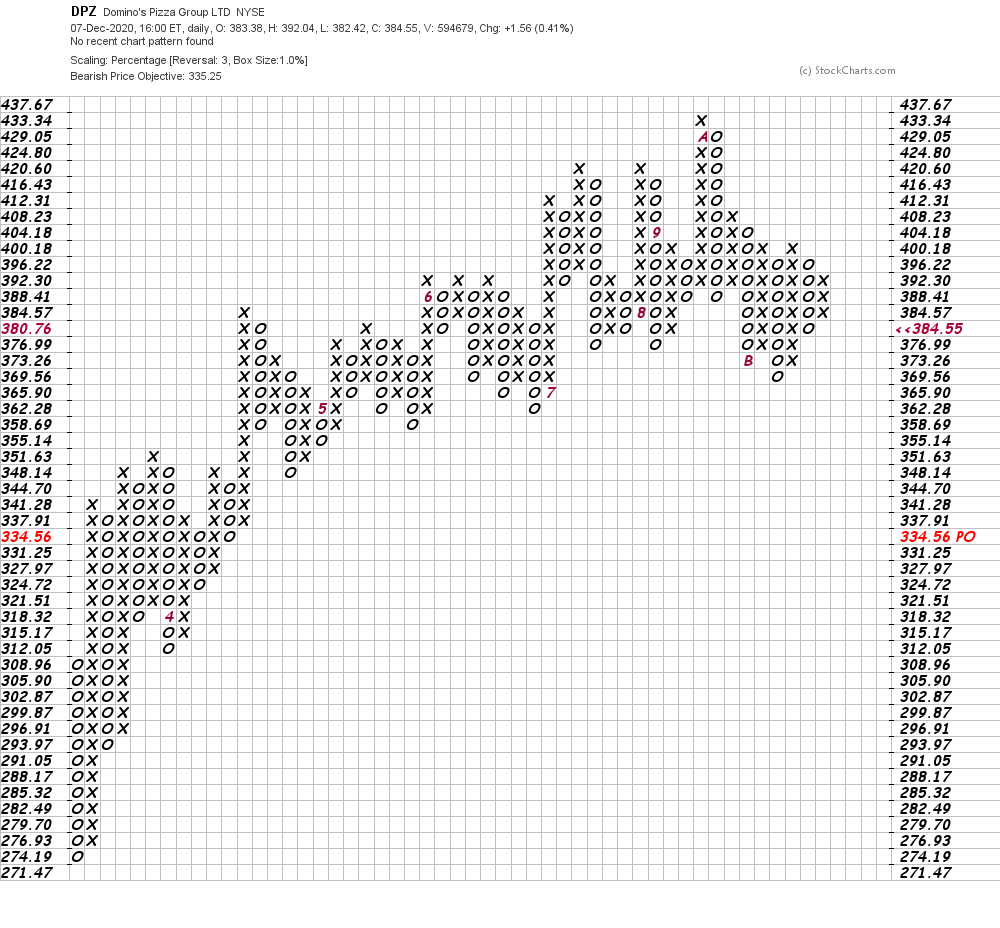 Bottom-line strategy: Normally I would say that pizza consumption is going to increase in the weeks ahead with all the sports activities on television. Despite this obvious forecast, however, the charts of DPZ look vulnerable to declines. A break of $375 would not be a good signal.

Get an email alert each time I write an article for Real Money. Click the "+Follow" next to my byline to this article.
TAGS: Investing | Stocks | Technical Analysis | Food & Drink | Mad Money