By TIMOTHY COLLINS May 19, 2020 | 03:05 PM EDT
Stocks quotes in this article: SPYG, SPYD, SPYB, SPYV
The market indexes are not nearly as strong as Monday's, but I feel like underlying names are acting better.
It may sound strange, but Monday saw a rotation away from growth and momentum into names that haven't performed nearly as well over the past several months. The overall push of the market still keeps former winners in the green, but the day definitely acted as a change of character. Tuesday, we're back to the winners being winners and carrying the herd.
I'm not sure some people understand how different underlying performance has been in different groups of the S&P 500 this year. I'm not referring to industry subsectors, but more in terms of classification: growth, value, buyback, high dividend, and equal-weighted S&P 500 exchange-traded funds.
Take a gander at these two charts comparing the SPDR S&P 500 Growth ( SPYG) , SPDR S&P 500 High Dividend ( SPYD) , SPDR S&P 500 Buyback ( SPYB) , SPDR S&P 500 Value ( SPYV) , and the Invesco S&P 500 Equal-Weighted funds.
Growth began the year with a strong start. Before the dip began, SPYG was up over 6%, well ahead of the others in this comparison, but not ridiculously so. Up 6% compared to flat to up 2% isn't crazy, but fast-forward to now. SPYG is basically flat on the year while the other ETFs are down 16% to 30%. Those numbers are eye-catching.
We may want to tell ourselves the broad market is recovering well, but the truth is small segments of the broad market have recovered well. There are still huge pockets of weakness.

This should lead us to two camps for the second half of the year. Those riding momentum, buying growth hand-over-fist vs. those looking for some reversion to the mean or catch-up in the markets over the second half. We saw a bit of this catch-up yesterday. It produced one of the strongest days of the year. One day isn't a takeaway, but perhaps we're going to find stability or more ho-hum days when growth is in the lead and volatility with huge moves when things like value and high-yielders take center stage.
Admittedly, I haven't put my head around a possible arbitrage or approach to play this thesis yet. I'd love to see another day or two of big outperformance to have a few more data points to consider, but I grouped them together in their own watchlist, so I can quickly see which is performing the best. 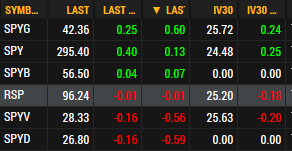 I won't watch this non-stop, but it's a good visual during the first and last 30 minutes of the trading days. Trends have become important. Often, they are the over-arching influence on what I'm looking to buy and sell whether intraday or even for the next few days. 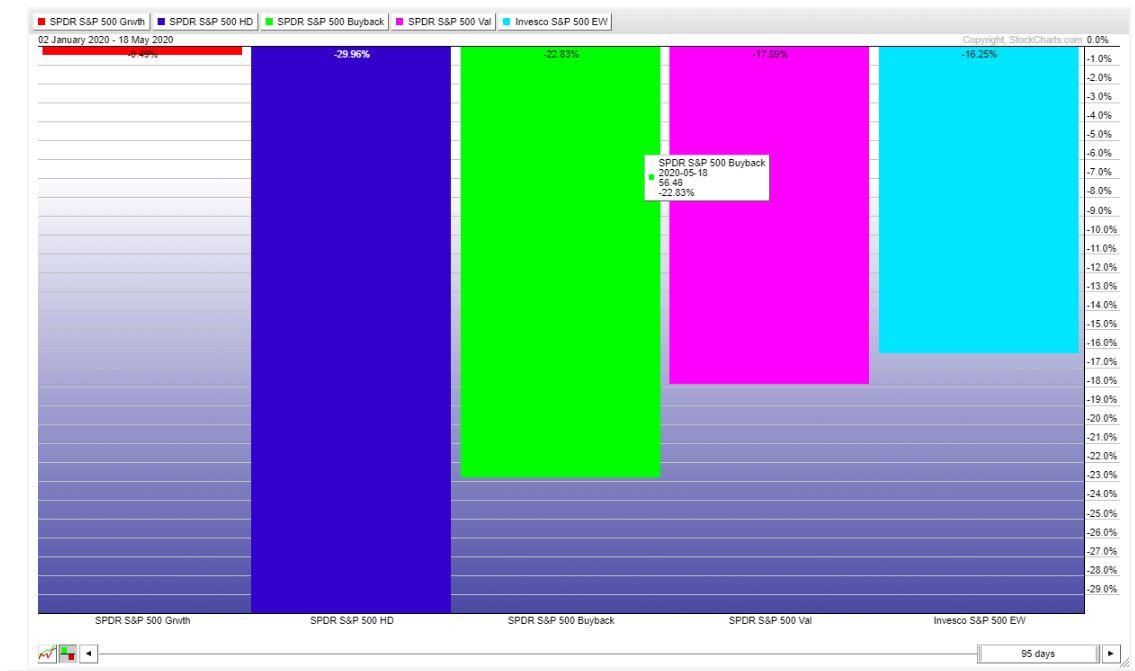 I've found a similar pattern in small caps, tech, and the S&P 500. The strongest early in the day remains the strongest throughout. The weakest remains the weakness. Of course, it won't be the case every day, but it has been much more often than not. One can even expand to include energy and financials, although I find that it's too easy to be overwhelmed watching too much. Have a few simpler watchlists to help guide your day and it should help your mindset on where to look whether you want to go long or short.
Get an email alert each time I write an article for Real Money. Click the "+Follow" next to my byline to this article.
TAGS: ETFs | Balanced Funds | Investing | Stocks