Gridlock! While players on both sides of the aisle go about exaggerating just how well their particular side performed in Tuesday night's U.S. midterm elections, the rest of us will go about trying to turn a buck here or there. What now, as Democrats have met expectations by re-taking control of the House of Representatives? What now, as Republicans actually strengthened their control of the U.S. Senate? What changes? What can change?

I think it might be safe to say that the new House will, for political purposes, try to draw back on the 2017 tax cuts, or the current trajectory for defense spending. Without control of both houses, and without a veto-proof majority anywhere, though, any effort such as this would likely amount to less than a hill of beans. What may amount to more than a hill of beans will be just how aggressive this new House leadership is in pursuing continual investigations that end up damaging the reputations of both the investigated and those in pursuit, if the public sees this effort as disingenuous or politically motivated.

Tuesday night, markets were flashing their approval. Yes, it's early. The good people of Gotham will not yet wake for several hours. However, Asian markets and domestic equity index futures are roaring. The dollar has weakened. That's always a positive.

As we hear from the FOMC tomorrow, my thought is that we shouldn't get too fired up. The one organization that (to paraphrase James Grant), can act as both arsonist and fireman is on its way -- and they don't love you. Aside from monetary policy and my own, admittedly negative, bias concerning those who create it, there are serious economic implications going forward based on a gridlocked legislature. Let's explore.

As I sit in my office looking out of a blackened window, all I can see are a street light that shines day or night, and two other lights coming from a building across the street. The rest is dark. How fitting. No matter how late or early it gets, these three electric lights always snare my attention.

Now, let's consider the street light to be a metaphor for deregulation. Deregulation has been perhaps the largest, and most significant, catalyst for the dramatic improvement in national economic performance experienced since the national election two years ago. Current levels of regulation/deregulation, I would think to be safe without a sound provocation for roll-back.

Now, consider those other two lights. These lights are turned off by the human owners of that building each day. But the owners often forget to shut down those two lights. That's fiscal policy. What has become apparent is that there is no one left in Washington that exhibits fiscal discipline. No one to shut off the lights. Will this eventually be our undoing? Perhaps.

Most sentient economists, actually let's make an attempt at accuracy and just leave out the adjective. Most economists do expect the current economic expansion to slow in trajectory by this time next year. How to avoid a slow down? I think that the potential for increased spending on infrastructure modernization probably just got considerably better. Don't think so? The president is a builder, and a populist. That makes him adaptive to his environment to a greater degree than most extremists on both sides understand.

The president will expand on his reputation as a job creator, and the Democrats in the house will be able to partner on this in order to claim a certain level of legislative victory. When? I don't know, but I think we we do know that this comes up sometime during the tenure of the 116th congress. In the meantime, infrastructure-type names will become more tradeable, and more volatile.

The retail investor must know what they are betting on, and that is even more important when an industry is likely to fall into the cross-hairs of high-speed rotation caused by the modern themes of both passive investment and algorithmic trading. Trust me, you're not fast enough to play it by ear unless your tolerance for the risk allows patience with your own idea.

That said, the president has continually harped on outlandish drug prices. This is a view shared by Democrats going back several years. This is a theme that will allow the populist to appear the hero to the unwashed masses should re-election for the president be sought in two years' time, even if the imagery is one of opposing his own party's leaders and embracing the usual opposition. This also presents as potential fodder for deal making in unrelated areas, as political opportunity arises.

On trade, the president's USMCA, or NAFTA 2.0, would appear to have some support from organized labor. Until that support is either rejected or solidified, it is difficult to predict acceptance by the legislature. On top of that, I really am also not sure about Democratic support, or lack thereof, regarding China, and the coming meeting between Presidents Xi and Trump. I would think there would be an overt attempt to slow down both the expansion to include all Chinese imports among those currently being taxed, as well as the increase in the tariff itself from 10% to 25%. This topic is one that will have to evolve in real time before our eyes, and will remain a source of market volatility.

Your pal grew up in Queens, New York, and has always been an enthusiastic sports fan. The neighborhood had much to offer. Both the New York Mets and New York Jets played their home games locally. Shea Stadium was a frequent hangout for adolescent boys in my age group.

Before they built the bleachers and the big, "Diamond Vision" screen, a 12 year old could watch about two thirds of a baseball game from the trees behind center field. The trees were filled with kids for every day game. Every single day game. Especially 1974 and 1975, when the Yankees moved to Queens, and there was a home game at Shea just about every day of the week for two summers.

Football was different. You could see about 65 yards of the field from the very end of the elevated subway platform above Roosevelt Avenue. That was awesome. A kid did need a transistor radio for when the ball was somewhere in the other 35 yards. Remember, the city had largely surrendered the subway system in the 1970s, so large groups of kids drew no attention. Then the Jets betrayed the people of Queens. On December 10, 1983, the Jets played their last home game in Shea Stadium and moved to New Jersey. Most Jets fans (Okay, this Jets fan) have never forgiven the team. Oh, we might still watch the team on occasion, but losing does not hurt us like it does in baseball. Queens kids gave up on the NFL a long time ago. They killed our emotional attachment.

Word has it that Amazon (AMZN) is moving to Queens, NY. Actually, the Long Island City neighborhood is perfect for Amazon. Large swaths of commercial properties, access to major highways and railroad hubs, proximity to both Long Island and New York City. If so, well done. The New York Times is reporting that Amazon has likely selected both this area and the Crystal City area of Arlington, Virginia as either secondary headquarters or super-sized satellites offices on the east coast to add to the Seattle-based firm's presence. These additions are expected to add 50,000 hires between the two sites, and these are expected to be good jobs. In addition, the area is within striking distance of more than 20 million area residents -- or to put it in perspective, 1 of every 16 Americans. 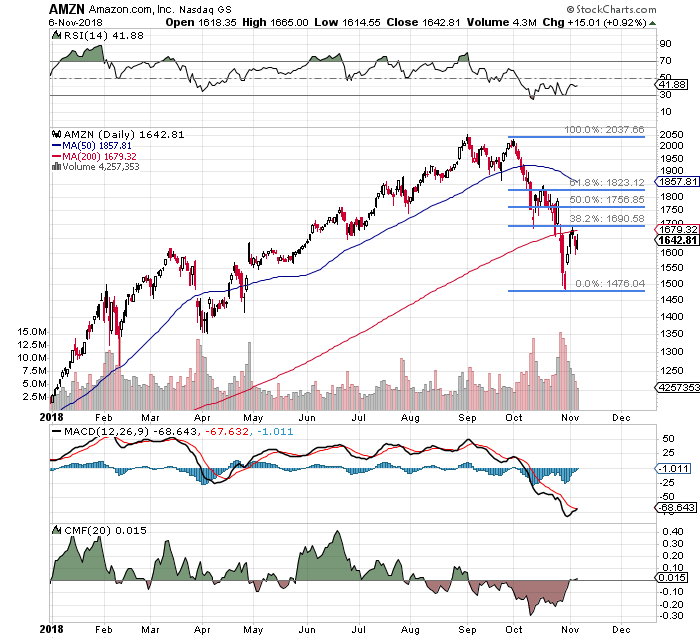 I receive requests for comment on Amazon from retail investors nearly every day. The name has been extremely volatile, so let's take another look, from a fundamental/technical hybrid type of view, and see if we can offer our dear friends anything of value.

The first thing I see is the resistance that Amazon recently met at a 38.2% retracement of the earnings-related selloff. You may see this as the 200-day Simple Moving Average, as they are nearly one and the same. Relative Strength and the Money Flow have improved noticeably, while the daily Moving Average Convergence Divergence is currently set up for short-term bullishness.

Tune in Wednesday at 11 a.m. ET as Jim Cramer hosts famed technical and quantitative analyst Marc Chaikin for a free one-hour Webinar on how to invest for the rest of 2018 and beyond. Click here to register.

The stock will likely retest the $1690 level from below at some point this morning. Anything resembling a take-and-hold at that spot could allow the name to appreciate another $60, as markets normalize over a couple of weeks. The danger here is that the Fed is likely willing to harm all equities on Thursday afternoon, after feeling emboldened by the incredibly robust October employment situation.

Do not forget that Amazon remains top dog in the public cloud space, even if Microsoft (MSFT) closes in as a real competitor. In my opinion, there is ample room for both. Let's also remember the firm's dominant position in e-commerce and the growing advertising business that this supports. The eventual direction of that advertising business line could end up being as important as the underlying commerce itself.

It's not my quote -- perhaps it was Zev Fima who said (paraphrasing) that if someone is already on Amazon, that person is already looking to spend money. The danger? That the firm shows no concern whatsoever when it comes to investing in growing its businesses -- and that could impact margins in a painful way now that the firm is profitable.

Enough. I certainly believe in this stock as a medium-to-long-term investment. As regular readers know, I maintain a core long position in this name that I consider somewhat untouchable, and often trade short-term volatility in the name separately, as if the these were two positions.

FYI, though these sales can be quite lucrative, I have, for now, suspended my sales of out-of-the-money puts in any name that trades at a four-digit handle. I really had to sweat out the October monthly expiration period, and while I did get away with that, it was absolutely no fun at all.

Note: These targets are meant for core long-term positions. I have been much more aggressive in regards to my short-term book and recently benefited greatly from the stock's adherence to the Fibonacci model. That said, I intend to give $1690 a chance to fall rather than take an automatic profit there.