Happe said this was a challenging quarter that included a shutdown and a restart of their operations. He predicted a strong summer season for RVs and Winnebago. He added that the outdoors is safer than being indoors and with extra free time, more consumers are discovering RVs.

Winnebago typically sees about a third of its business come from new customers, Happe said, but this year that number is surging to half and sometimes even more in certain areas.

Cramer said he thinks the popularity in RVs is going to last, as driving yourself is now safer than flying.

We looked at the charts of WGO roughly one month ago and wrote that, "WGO has made a big rally from the March low, so a short period of sideways prices action would be welcomed. Use this anticipated consolidation to go long risking below $50. The $91 area is our price objective."

Let's look at some updated charts to see how things turned out.

In the daily bar chart of WGO, below, we can see that the shares rallied further into June instead of trading sideways. The daily On-Balance-Volume (OBV) line turned flat in June while prices moved higher. This is a bearish divergence and tells us that buyers of WGO were not more aggressive at the higher price levels. The slopes of the 50-day moving average and the 200-day moving average remain positive.

The Moving Average Convergence Divergence (MACD) oscillator has rolled over in a take profits signal.

In the weekly bar chart of WGO, below, we can see that prices are still in an uptrend above the rising 40-week moving average line but prices are looking a bit extended.

The weekly OBV line has moved sideways since late May and like the daily OBV line, is a bearish divergence when compared to the price action. The MACD oscillator is bullish.

In this daily Point and Figure chart of WGO, below, we can see that the software is "reading" the price action in June (look for the "6" on the chart) as distribution (selling) and is projecting a potential downside price target around $56. 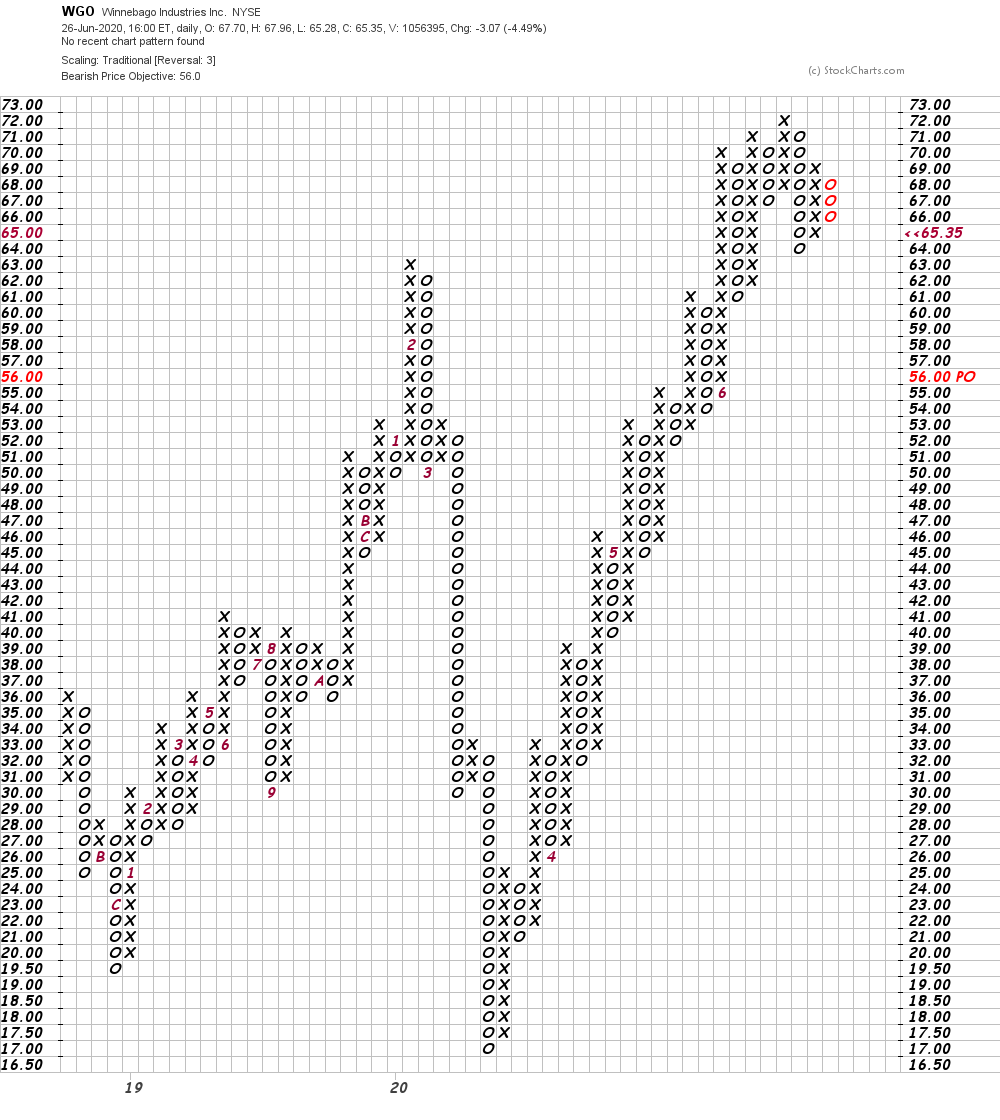 Bottom-line strategy: Continue to hold previous longs. Others could use weakness below $60 to go long. Risk a close below $55. Our upside price target is still $91.

Get an email alert each time I write an article for Real Money. Click the "+Follow" next to my byline to this article.
TAGS: Investing | Stocks | Technical Analysis | Automotive | Resorts and Hotels | Transportation | Mad Money | Executive Interview

Fight the Rally, or Fight the Fed?

That's the big question facing market participants, and here is a key stock index point to watch to see which side to take -- plus a steelmaker trade to consider.

Ascendis Pharma Presents a Mixed Technical Picture Ahead of Earnings

The biopharmaceutical company could offer a buying opportunity on a pullback based on its chart.